Two separate analysts lowered their price targets on Chicago Bridge & Iron stock Wednesday. First, Australian banker Macquarie cut its price target to $10, implying a 24% price decline, on worries that CBI will experience delays of up to a year in building a liquefied natural gas plant in Freeport, Texas, resulting in "another cost overrun putting further stress on their recently increased debt covenants." Macquarie warned that delays in Freeport and on other projects will cause "continued cash burn on current projects, or [a] write down of uncollectable receivables."

Macquarie later retracted this claim in part but noted that while CBI might not experience delays, it will incur higher costs from having to hire more workers to get its project completed on time. "The net impact," however, " remains the same," says Macquarie, "as staffing up would dramatically reduce profitability and lead to costs well ahead of what CBI had planned."

Later in the day, investment banker R.W. Baird piled on with a price target cut of its own on CBI stock, albeit only to $15 a share. 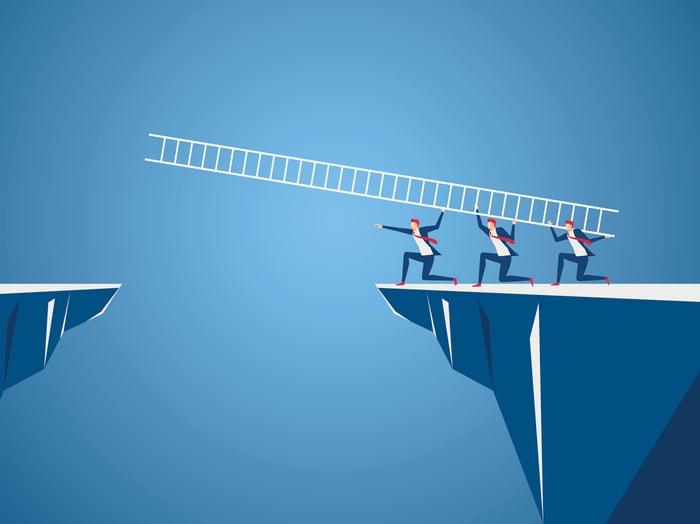 Analysts tried to bridge a gap in their own logic today. Image source: Getty Images.

Something about all this smells fishy. Macquarie's cutting of its price target for one reason, then retracting that reason but reiterating its price target cut anyway, smacks of an analyst trying to rationalize why its conclusion remains right even though it got its facts all wrong.

Sure, there are reasons to dislike Chicago Bridge & Iron stock -- the fact that it's reported net losses for two straight years springs to mind. That said, CBI generated nearly $170 million in positive free cash flow over the past 12 months, and while it has a lot of debt, even factoring debt into the picture, the stock sells for an enterprise value that's a not-unreasonable 13.7 times trailing FCF.

Today's pullback in the stock price just might be a good reason to buy.