We're only halfway through 2017, and this year has already been a big one for emerging technologies. While there are lots of cool things happening in the tech industry, three specific trends are outpacing nearly everything else: self-driving cars, artificial intelligence (AI), and virtual and augmented reality (VR and AR).

Some of the trends focus on digital services and software (as opposed to devices), and some are already having a transformative impact on how people experience technology and how businesses sell products -- but all are likely to add massive value to their respective markets.

Here are some of the key players investors should be watching.

Admittedly, some of these companies are making big waves in multiple trends this year, but I'm highlighting one or two key players in each space. Additionally, you can find many more companies that are making big plays in autonomous vehicles, AR/VR, and AI, but the companies listed here are each dominating in such a way as to build up their competitive advantages. 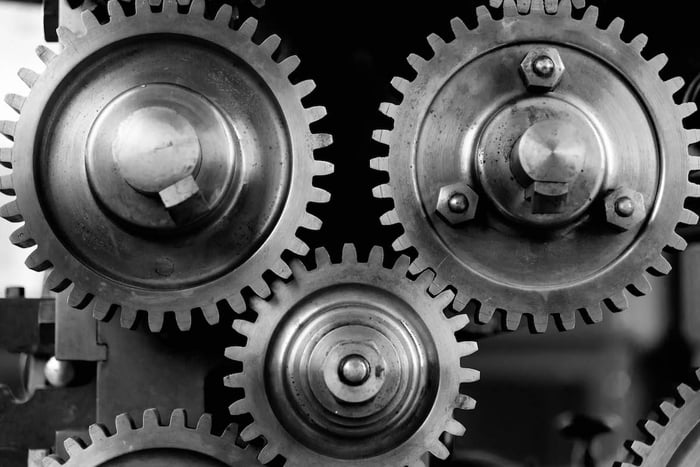 While driverless cars haven't taken to the road en masse just yet, we've still seen lots of huge moves in this space. One of the most visible was Alphabet's Google spinning out its driverless car division into its own company, called Waymo, just two weeks before the new year began.

Since then, Waymo has announced a partnership with Fiat Chrysler to test its technology in 600 of the company's vans and has set up a free riding program in Arizona for people to sign up to use the vehicles for their everyday commuting needs. Waymo is aiming to eventually earn revenue from its technology through autonomous-vehicle rental services and by licensing its technology to automakers.

Waymo gets most of the attention these days, but it's actually an old automotive paragon that's leading the driverless revolution: Ford. The company is currently building out its autonomous-car fleet from 30 to 90 vehicles by the end of this year and is even revamping one of its factories so it can assemble driverless cars.

These moves come as Ford is investing $1 billion in an artificial intelligence company, Argo AI, over the next five years. Argo is building Ford's driverless car system so that the automaker can release fully autonomous vehicles by 2021.

Ford's commitment to driverless car technologies was pushed forward recently when Jim Hackett, formerly the head of the company's Smart Mobility division, was named as Ford's new CEO in May.

Machine learning has quickly become a buzzword this year, and investors should pay attention. As part of the broader artificial intelligence (AI) market, machine learning is already transforming how companies process information. Case in point, here's what Amazon.com (NASDAQ:AMZN) CEO Jeff Bezos said earlier this year in his investor note:

Based on Bezos' own words, machine learning is influencing nearly everything the company does, including its fast-growing Amazon Web Services (AWS). AWS now offers machine-learning services like image analysis, natural language processing, and speech generation for apps and services hooked into Amazon's cloud service.

The broader AI market is growing rapidly, and Tractica estimates that AI-specific revenues will pop from less than $1.4 billion in 2016 to $59.8 billion by 2025.

There have been too many big moves in the virtual reality and augmented reality space in 2017 to ignore. One of the first came at Facebook's F8 conference back in May, where the company showed off a slew of new augmented reality features for its flagship Facebook app.

Facebook CEO Mark Zuckerberg has been calling VR the next potential computing platform for a while now, and the company took another step in that direction when it showed off its Spaces app at F8. The app lets people interact with their Facebook friends in a VR environment; it's in beta mode right now. The company has also launched new features in its flagship Facebook app to bring AR filters to the platform and allow developers to create their own with the company's AR Studio.

Aside from Facebook, Apple is also making some big moves in the AR space. Apple unveiled a new AR software development kit (SDK) at its recent Worldwide Developers Conference. The new SDK means developers will be able to create AR features and apps for iOS 11. That's important because it means that once Apple updates its software on millions of devices, it'll create the largest AR platform and could spark more adoption for the technology.

That's particularly notable as Apple is rumored to be working on its own AR headset or pair or glasses. UBS analyst Steven Milunovich believes Apple might use the iPhone to process all the AR data for its glasses -- essentially doing all the heavy lifting for image processing -- and use the glasses as a catalyst for more iPhone sales.

There's still plenty of time in the year for more tech trends to emerge, but I think it's more likely that we'll see these companies build out these trends even further. Investors should remember that there are plenty of other companies that are making big strides in driverless cars, artificial intelligence, and AR and VR -- but the above companies are clear leaders in the space and will likely remain such for years to come.