In August 2015, I highlighted some of the major risks to Target's (NYSE:TGT) business, argued that it was not as safe as many investors believed at the time, and warned that shareholders who failed to take notice of those threats risked being blindsided with painful losses.

Later, in June 2016, I shared five charts that painted a bleak picture of Target's future and suggested that investors would be best served by staying clear of the struggling retailer's stock altogether. Since then, shares are down 28% -- and have lost more than a third of their value since I first warned of the risks. 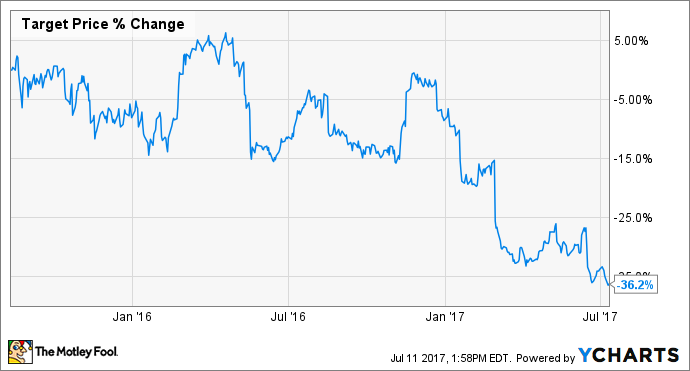 Today, even after these sizable declines, I still believe investors would be best served by avoiding Target's stock if they currently don't own it -- and selling it if they do. Here's why. 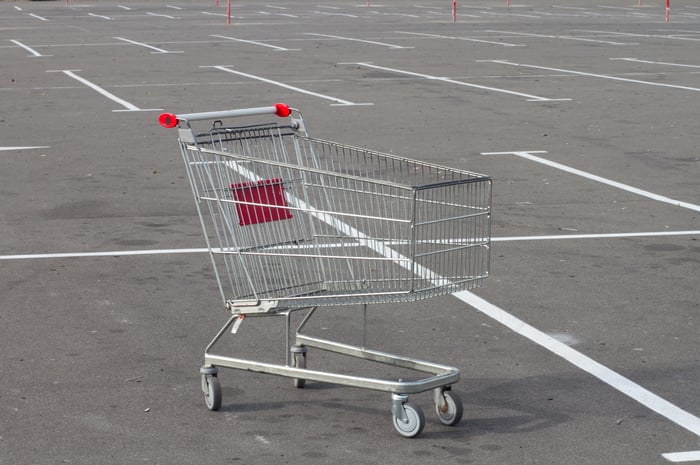 Amazon vs. Target: Heads I win, tails you lose

Target, like other traditional retailers, is in what many believe to be an unwinnable war with e-commerce competitors such as Amazon.com (NASDAQ:AMZN).

Target faces a difficult dilemma: It can continue to lose sales to Amazon -- which offers a wider selection of goods, better prices, and a more convenient shopping experience -- or it can attempt to compete with the online juggernaut on price and sacrifice its margins. Either way, Target loses.

"The costs associated with the accelerated mix shift between our stores and digital channels and a highly promotional competitive environment had a negative impact on our fourth quarter margins and earnings per share," CEO Brian Cornell said following Target's all-important holiday quarter. That speaks to Target's challenge; while the company is seeing solid growth in its online sales, it's coming at the expense of its profitability. And ultimately, it's profits -- not sales -- that matter most.

One area where Target has had an advantage over its online rivals is in groceries. Shipping food items like fresh produce has historically proven challenging for online delivery companies. In turn, Target's large grocery business has helped to drive traffic to its stores.

Now, however, Amazon is making an aggressive move into the grocery business with its pending $13.7 billion acquisition of Whole Foods (NASDAQ:WFM). Should the deal be finalized -- and most signs suggest that it will -- Amazon will instantly become a major force in groceries by scooping up the natural and organic foods leader.

Moreover, it's likely that Amazon will utilize Whole Foods' store base to strengthen its already robust online distribution system, potentially making online food delivery a more viable option for a larger portion of the population. That would eliminate one of Target's last remaining advantages over Amazon, and likely put a sizable dent in its grocery sales. In turn, Target may see a further decline in traffic to its stores.

The core argument among Target bulls is that these concerns are already reflected in its stock price. Thus, they argue, Target's low valuation makes its shares attractive. Yet while Target's shares currently trade for only about 10 times trailing earnings, the struggling retailer's P/E rises to more than 12 on a forward basis, as Target's EPS is expected to fall approximately 15% in fiscal 2017.

This highlights the danger in investing in a business suffering from disruption: A seemingly cheap stock can become more expensive if its earnings continue to deteriorate. That's why investors are often best served by owning companies with strengthening competitive advantages, rather than attempting to bargain shop among a bin of declining businesses. I believe this will ultimately prove true with Target, a business that no longer possesses much of a competitive moat. I therefore again urge investors to consider these risks before buying -- or continuing to hold -- Target stock.