Read this if you've been putting off investing in driverless car stocks.

If you regularly read technology or automotive news, you've probably seen more than a few articles about how driverless cars are going to take over traditional car ownership. And while self-driving vehicles will certainly change how we all get around, I sympathize with people who are skeptical of all the hype. We're still years away from fully self-driving cars, and likely decades away from driverless car ubiquity.

But that doesn't mean you should overlook driverless car stocks right now. Investing in this growing trend is more than just betting that we all want to take naps in the car on the way to work. It's actually a bet on artificial intelligence, new services in the transportation sector, and additional revenue streams for automakers -- and it may come with less risk than you might think. 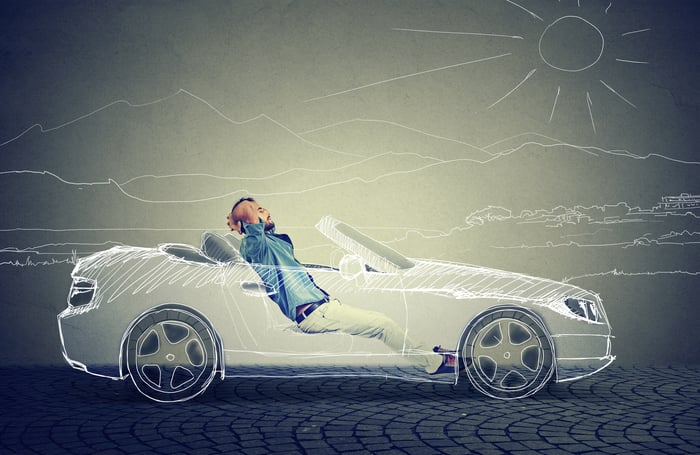 1. The potential market for self-driving cars is massive

The market size for self-driving cars is expected to reach between $42-$77 billion by 2035, according to research by Boston Consulting Group. But that doesn't even begin to scratch the surface of the vast new services and market that are going to pop up around autonomous vehicles (more on that in a just a second).

Intel (INTC 1.31%) recently released a report with Strategy Analytics that said driverless cars will create a "Passenger Economy" that will amount to a $7 trillion market by 2050. Intel plans to benefit from all this by selling processors for self-driving vehicles. Intel also purchased Mobileye, a semi-autonomous car technology company, earlier this year to jump start its position in the space.

The vast market size potential of driverless cars won't just come from automakers convincing us to trade in our traditional cars for self-driving ones. New, long-haul autonomous trucking services will pop up, autonomous delivery services for packages will emerge, and automakers themselves will launch new services.

Ford (F 1.02%) has already said that when it releases fully autonomous vehicles by 2021, it will release several types of new services (i.e not just selling vehicles directly to customers). The company said in a press release earlier this year that its Smart Mobillity plans include "using autonomous vehicles to move goods and people, such as ride sharing, ride hailing or package delivery fleets."

3. Automakers are already betting on the technology

If you think driverless cars are all hype and no substance, consider this: Audi just debuted its new A8 luxury sedan with Level 3 automation. Level 3 automation means that the driver can take their hands off the wheel for a short time, and it will allow drivers to turn the controls over to the car on certain roads at speeds up to 37 mph.

If that's not enough to convince you, Tesla (TSLA 10.97%) already builds all of its new vehicles with self-driving hardware built into them, and is slowly rolling out the capabilities as the vehicles learn more about driving. The company aims to do a fully autonomous cross-country self-driving test later this year.

Finally, General Motors (GM 0.44%) is helping to lead the way to self-driving cars after the company purchased driverless-car tech company Cruise Automation last year for $1 billion, and is also working with ride-hailing company Lyft (of which GM owns 9%) to test thousands of self-driving vehicles on the road starting next year.

But the biggest news from GM is that it recently completed production of 130 fully autonomous Chevrolet Bolt electric vehicles at one of its factories. This gives GM one of the biggest self-driving car fleets of any company right now.

4. A major obstacle to driverless car tech may soon disappear

One major hindrance to driverless cars in the U.S. is that individual states currently decide what level of automation they allow on their roads, which has caused varying amounts of restrictions. For example, Wired wrote recently that Arizona has a simple registration process to allow self-driving cars on the road, while New York says they need to have police escorts.

The good news is that driverless car technologies are gaining acceptance by many in Congress, on both sides of the aisle, and it appears that the U.S. is moving closer to passing federal rules that would give automakers and tech companies standards that would apply across state lines. And there's good reason for the consensus: driverless cars could eventually save up to 300,000 lives in the U.S. every decade.

Typically, big tech trends can involve a fair amount of risk because companies are spending so much time and money investing in an unproven market. But investors should remember that most automakers and tech companies aren't making an all-in bet on autonomous cars.

Ford, GM, Tesla, and others will be perfectly fine if the driverless car predictions don't pan out out as planned. These companies will continue to sell vehicles to customers whether the cars are autonomous or not.

And most tech companies will be just fine too. NVIDIA (NVDA 2.48%) has developed one of the most advanced self-driving computer systems, called Drive PX 2, which processes images collected by sensors so that that semi-autonomous can see and respond to the world around them. Audi, Tesla, Volvo, and Toyota all use some of NVIDIA's Drive PX technology for their semi-autnomous features right now. But even NVIDIA isn't a pure-play on driverless car tech. The company made about 53% of its total revenue selling graphics processors for the gaming market last quarter, and just 7% from its automotive segment.

Investors should know that the driverless car market is still getting its footing, but it's pretty clear that self-driving cars are on their way. Investors looking to benefit from this trend have lots of companies to choose from -- and there's still plenty of time to pick a self-driving car stock that fits into your investing strategy.