Ford Motor Company (NYSE:F) said this past week that it earned $195 million in equity income from its joint ventures in China in the second quarter.

That's not bad, but it's not great. A year ago, in the second quarter of 2016, Ford earned $296 million from its Chinese joint ventures -- and its profit margin was a lot better.

Ford's China profit fell even though its sales rose during the quarter. So what's the story?

Sales were up, but profits fell

Here's the thing: Ford's profit dropped despite the fact that its sales in China rose 7.5% in the second quarter. But Ford executives in the region had said that they were adjusting pricing, suggesting that Ford might have resorted to cutting prices in order to boost sales.

That's something that Ford said it doesn't want to do, in China or anywhere else -- at least, not without cutting costs at the same time. But there's a dynamic in China that might have led Ford to make an exception: The rise of lower-cost domestic Chinese automakers, who have been giving the global brands (Ford included) very tough competition in some of the lower-cost market segments -- particularly around small, affordable SUVs. 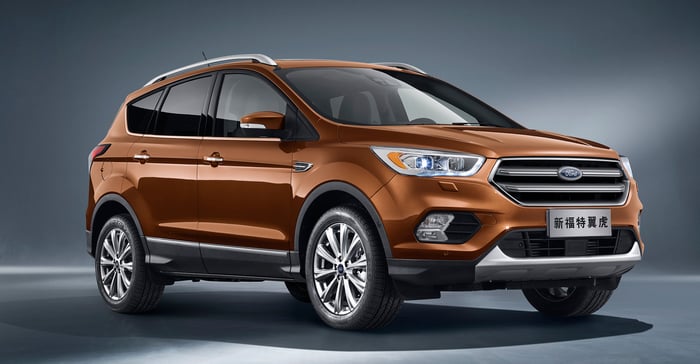 The Ford Kuga is the Chinese-market version of the Escape. Ford cut its pricing during the second quarter to better compete with lower-cost domestic Chinese SUVs. Image source: Ford Motor Company.

That line of thought left me wondering if this level of profitability in China is the "new normal" for Ford. If so, that's a concern. Consider that rival General Motors' (NYSE: GM) equity income from China rose 8% in the second quarter to a healthy $509 million. GM's sales and operations in China are significantly larger than Ford's, but still: It's facing the same pressures from lower-cost domestic competition, but it managed a year-over-year profit increase.

So what happened? I asked Ford's chief financial officer to explain.

"Is this the new normal?" I asked Ford CFO Bob Shanks.

Here's part of what prompted my question. Over the last six quarters, as competition from local Chinese automakers has ramped up, Ford's profit from its joint ventures in China and its profit margin have both trended downward. 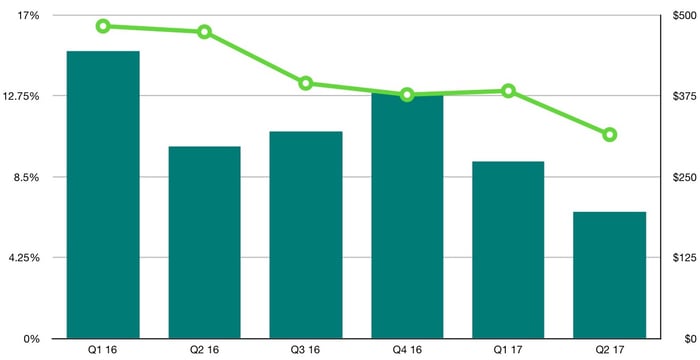 Data source: Ford Motor Company. The bars show Ford's equity income from its China joint ventures for every quarter since the beginning of 2016, in millions of dollars. The dots on the line show Ford's profit margin in each quarter. Chart by the author.

"I don't think it's the new normal," Shanks said. He went on to explain that the year-over-year drop we saw in the second quarter was something of a fluke:

What's in that [profit decline] is really two things. One is that we receive investment incentives in China, and we don't get them necessarily in an even manner throughout the course of the year. This was a light quarter in terms of realizing those incentives, so there was a negative year-over-year effect from that. The other factor was the weakness of the renminbi.

The biggest piece, though, was the timing of those incentives. It had a disproportionate impact in the quarter. It's not a normal impact, and so I think that will normalize as you get into the balance of the year.

I followed up by asking whether Ford's price adjustments, particularly on the Kuga, had an effect.

"No, those two factors explain everything [about the year-over-year profit drop]," Shanks said.

The upshot: Things should improve as the year goes on

During Ford's earnings call, Shanks explained that Ford had in fact cut its pricing in China during the quarter. But he said the effects of the price cuts were largely offset by cost reductions, as well as by the increased sales volumes and a more favorable "mix" of products sold year-over-year.

Ford's guidance for the full year doesn't address its equity income from China specifically. But it does call for a higher pre-tax profit in its Asia Pacific region (which includes China) than the $627 million it earned in the region in 2016. For the full year, it expects the effects of higher sales volumes, a more favorable product mix, and lower costs to more than offset the effects of negative pricing and unfavorable exchange-rate swings.

Long story short: Yes, Ford's pricing is still under pressure in China. But its sharp profit decline in the second quarter was something of a fluke, and the general trend should be positive as the remainder of the year unfolds.