Ford Motor Company (NYSE:F) said this past week that it lost $185 million in South America in the second quarter, on a pre-tax basis.

That sounds grim, but it's actually an improvement: A year ago, Ford lost $265 million in the region, on its way to a $1.1 billion loss for the full year.

But Ford's chief financial officer thinks that after all of those losses, things are finally starting to look up for the Blue Oval in South America's recession-battered new-car markets. 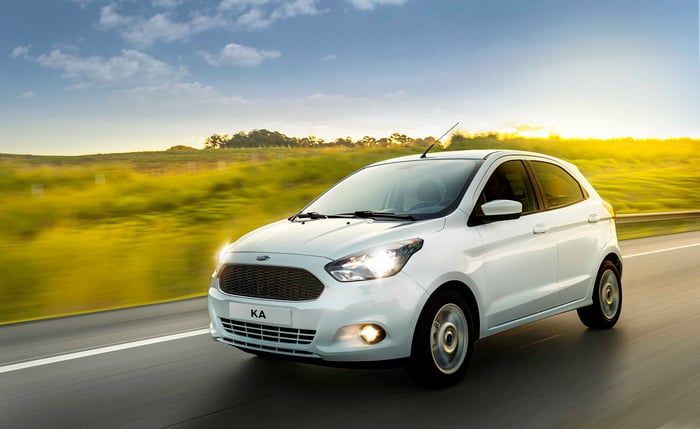 The tiny Ford Ka is a big seller for the Blue Oval in Brazil and other key markets in South America. Image source: Ford Motor Company.

Why Ford is feeling optimistic about South America

Here's the slide from Ford's earnings presentation that shows the factors in its year-over-year improvement in South America. 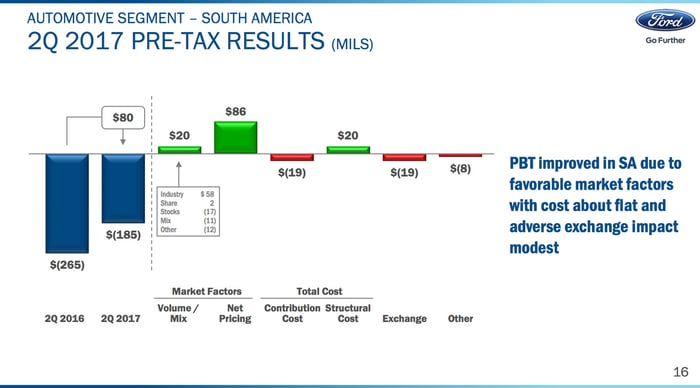 As you can see from the slide, improved sales volumes and better pricing helped considerably, offset only a little bit by unfavorable exchange-rate swings. Clearly, those are good signs, but I wanted to know how Ford viewed its situation in the region.

Ford's chief financial officer, Bob Shanks, has said in the past that tough economic conditions in several key South American markets, particularly Brazil, were a big factor in Ford's ongoing losses in the region. Back in January, he had told me that Ford thought things might finally start to improve in the region as 2017 unfolded.

We returned to that theme when I asked him about Ford's improved results in South America this past week:

Finally, the industry in Brazil is starting to recover. Most of that is what we call "direct sales", like fleet sales here in the U.S., but it's still starting to come back, and confidence is improving. The thing that's really exciting is that the inflation rate is down to about 3%.

So one of the interesting things is that when you look at the costs, our cost performance is basically flat [year-over-year]. If you go back and look at some of the other quarters that we've reported, we were getting good cost performance but it was being outpaced oftentimes by the very high local inflation. Finally we're starting to see a little bit better balance between the two, so we had flat costs [in the second quarter].

The good news is that the market factors are showing through.

Ford wasn't the only automaker to show a year-over-year improvement in South America in the second quarter. General Motors' (NYSE: GM) loss in South America narrowed to just $23 million in the second quarter from $118 million a year ago, while Fiat Chrysler Automobiles (NYSE: FCAU) even managed a small profit of 60 million euros in Latin America, up from a break-even result a year ago.

How this might play out in the second half of 2017

During Ford's earnings call, Shanks emphasized that Ford's management is feeling much better about the direction of the company's business in South America now that some signs of recovery are visible in the region.

Ford's guidance for the full year says only that it expects its 2017 result in South America to improve on last year's loss. With $429 million in losses in South America in the first half of 2017, I don't think Ford is likely to post a profit for the full year. But I won't be surprised if its loss in the second half is considerably smaller than its first-half loss -- and I also won't be surprised if Ford manages to squeeze out a quarterly profit in the region before too long, possibly by the fourth quarter.