World Wrestling Entertainment, Incorporated's (NYSE:WWE) second-quarter earnings report shows a company that is executing a plan of multiple paths of content distribution. Fans can view the company's content on traditional cable television, catch shows online through its WWE Network, or show up at a local venue and buy a ticket to a live event. It all works for the WWE as it broke its all-time revenue record with $215 million this past quarter.

When it comes to live shows, nothing is bigger for WWE than its annual Wrestlemania extravaganza held early in the quarter. This year's version was staged at the Orlando Citrus Bowl in front of 75,245 enthusiastic WWE fans. The show helped propel the company to a record for quarterly live events revenue of $52.8 million. That is a lot of fans going through WWE turnstiles around the country and represents a 10% hike in live events revenue for the first six months of this year on a year-over-year basis.

If you couldn't make it to a local venue, you could still see the shows. Traditional television and cable accounted for $66.2 million in quarterly revenue, up a stunning 18% on a year-over year basis. The matches are shown all over the world and the company highlighted the launch of new broadcasts in localized weekly TV shows in India and the Middle East.

Global advertising sponsorship revenue was up 25% in the first six months of this year compared to the same time period last year.   The company also signed an agreement to broadcast some of its content in Africa, which will bring the total number of countries to receive live WWE televised content to more than 50.

The innovation that is fueling a lot of the WWE's growth is its internet-based subscriber product, which allows fans to tune into all of the WWE content for only $9.99 per month. This is the linchpin of the company's strategy and it is operating on all cylinders with 1.63 million average paid subscribers for the quarter, up 8% on a year-over-year basis. WWE Network revenue for the first six months of the year is up 10% compared to the first six months of last year.

The amazing thing about the WWE Network, which only came into existence in early 2014, is that in only three years it has grown to 25% of the company's revenue and has not detracted from live event ticket sales and traditional television revenue, and you could argue it has added to those two segments. In essence, the WWE Network has expanded the company's fan base.

Social media is on the rise

Fans don't simply want to watch the WWE, they want to interact. Social media is helping fuel the company's growth as it gives fans a place to convene and share opinions. The company says its social media followers were up 19% in the first six months of the year to 800 million.

If that is not enough, video views on platforms including YouTube, Facebook, and wwe.com for the half topped 9 billion, up 18% from last year.

Looking at all the pieces of the puzzle paints a great picture for the WWE. The stock price has almost tripled from the end of 2013, just prior to the introduction of the WWE Network. 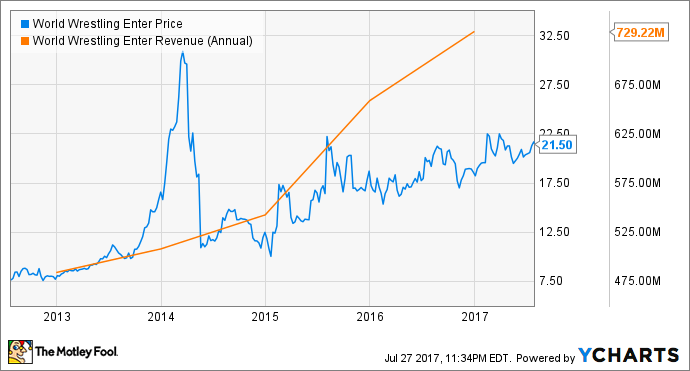 The WWE has a lot going for it and there is no reason to believe the story is close to an end. As long as people keep tuning in, this company has a long road of growth ahead.