Some investors prefer stability. The more volatility in their portfolios, the less they sleep at night. Sound like you? If so, I've got good news: One of the world's best businesses is still growing fast, has catalysts in waiting, and yet trades about as predictably as the overall market.

Facebook (NASDAQ:FB) has a beta rating -- basically a measure of volatility -- of just 1.14, which means the stock tracks mostly with its major index, but will occasionally move just a bit more.

Sometimes, that can mean big returns. Over the trailing 12 months, for example, Facebook stock is up 34.4% versus just 11.6% for the S&P 500 index and 19.5% for the Nasdaq. Buying and holding Facebook is like buying and holding an index fund, but without the fees and with some potential upside built in. Here are three reasons I believe the stock will continue beating the market for those who buy at current prices. 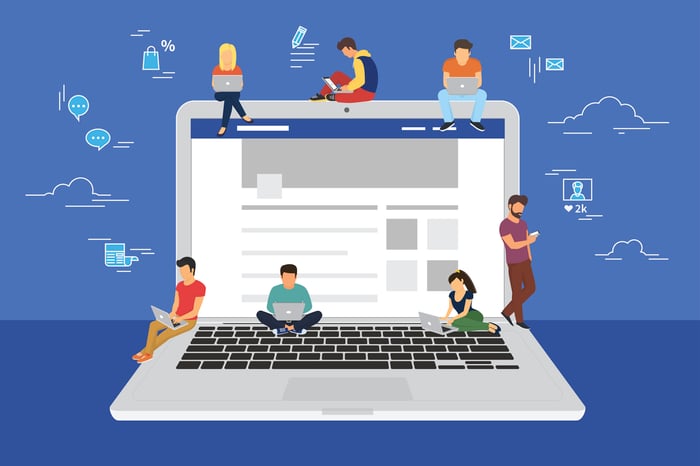 Facebook is rapidly becoming the mechanism for how the entire world connects. Source: Getty Images.

For a company that's worth close to half a trillion in market cap and one of the world's largest businesses by that and several other measures, Facebook is still growing revenue close to 50% every year. Margins are rising, too, thanks to a 24% year-over-year increase in the average price of ads in the latest quarter. That's start-up territory, people. If Facebook were still private, we'd be calling it the mother of all unicorns. Lucky you that the company is publicly traded and you can own the stock right now if you want to.

It's easy to forget that Facebook exists in places we don't think of as digital. And yet, as of 2013, there were 100 million "dumb" or feature phones users of the Facebook app. Surely that figure has multiplied.

Four years ago, Facebook reported 1.2 billion monthly active users. Today, the company serves over 2.01 billion users monthly, a 68% increase in a relatively short period of time. Meanwhile, as more of the world is covered in smartphones -- roughly half the Earth's population has one today, while two-thirds have a mobile phone of some sort -- it's at least even odds that Facebook, Messenger (1.2 billion active users), and WhatsApp (also 1.2 billion active users) will be among the first apps installed as friends seek easy ways to connect with each other.

Have you seen all the buzz about virtual reality (VR) and augmented reality (AR) tech? Most of it is ... meh. And that's actually good if you're a Facebook investor.

Early efforts to make money from Oculus headsets aren't producing much in the way of material profits, and yet the biggest market for VR and AR -- gaming -- is still in the nascent stages. Facebook's growth in other areas allows for time and investment to figure out how to best play in this new world, which means there's essentially zero contribution from this opportunity cooked into the current stock price. Maybe that's deserved, and VR and AR will end up on history's scrap heap. That seems unlikely when many companies, including Facebook, have already invested in making the technology useful for a large consumer audience.

And yet, AR and VR don't need to work out for Facebook for the company to keep piling up profits and delivering returns to investors. That's already happening. And you can sleep well knowing it's going to stay that way for a while.