Ford Motor Company (NYSE:F) said that it's expanding production in Russia. The Blue Oval said that it's adding a shift at an assembly plant that it owns with Russian automaker Sollers in response to increasing demand for several Ford-brand products.

It's the first time in several years that Ford has moved to increase production in Russia, which has suffered through a protracted downturn in new-vehicle sales. Here's why it's important for Ford. 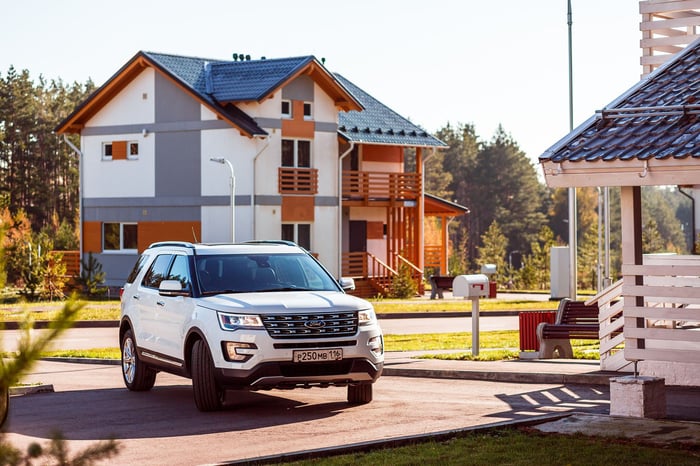 Sales of the Ford Explorer in Russia have more than doubled this year. The factory that builds the Explorer and other hot-selling Fords for the Russian market is hiring to boost production. Image source: Ford Motor Company.

Ford and Sollers said that they will add 700 new workers at their assembly plant in Elabuga, Tartarstan. The move will increase total employment by about a third, Ford said, and will enable the factory to begin operating on two full shifts.

The move is in response to increasing demand for Ford SUVs and commercial vehicles in Russia. Elabuga builds Ford's Kuga and Explorer SUVs, along with Ford Transit commercial vans. (The Kuga is the European twin of the U.S. Ford Escape.)

Adil Shirinov, president and CEO of Ford's joint venture with Solllers (called Ford Sollers), said that SUVs and commercial vehicles are key to Ford's Russia growth plans: "The development of our SUV and commercial vehicle range lies at the core of our strategy now at Ford Sollers. We're increasing the production of these models to strengthen further our position in these market segments, and to continue to grow our market share in 2018."

Ford Sollers will begin hiring the new workers next month.

After years of losses, some optimism

This move marks a turnaround of sorts for Ford in Russia. Former CEO Alan Mulally made significant investments in Russia in 2011, when the country's new-vehicle market was on an upswing. But Russia's economy subsequently swooned, hurt by a drop in global oil prices.

Mulally's bet looked to be in trouble. A big drop in sales forced Ford Sollers to cut jobs at both Elabuga and another factory near St. Petersburg in 2014. About a thousand workers were let go, which led to questions about Ford's ongoing commitment to the suddenly very-troubled Russian market.

Rival General Motors (NYSE:GM) wasn't interested in waiting around for a recovery. GM closed its operations in Russia in early 2015. But shortly after GM left, Ford doubled down on its Russian operation, boosting its investment in the Ford Sollers venture and launching several new models.

Mulally's successor as CEO, Mark Fields, said last year that Ford was still bullish on Russia's long-term prospects, even though it hadn't had much to show for its effort. But things were starting to turn: Back in January, CFO Bob Shanks told me that Ford was seeing signs that Russia's new-vehicle market might pick up as the year went on.

Shanks was right. Through August, Ford's sales in Russia this year are up 10%, and the growth rate is accelerating. The sales gains have come disproportionately to Elabuga's products: Sales of the Kuga, Transit, and Explorer have all doubled this year through August from a year ago. The Kuga is now Ford's best seller in Russia.

While things are improving, Ford Sollers isn't yet profitable, though its losses -- which have held back Ford's overall earnings in Europe -- are shrinking quickly. Shirinov thinks the losses could disappear entirely soon.

"Given the continued improvement in Russia, and if we stay on the track we have been on, then a return to profitability is not far off," he said.