A fresh breeze is blowing in the higher-dividend world, with activity picking up notably in recent weeks. Last week was another good one for income investors, with a clutch of notable stock market mainstays hiking their payouts.

For the second week in a row, it wasn't hard to find three juicy raisers out of that bunch. Read on to find out which stocks these were.

Tobacco giant Philip Morris International Inc. (NYSE:PM) is raising its quarterly dividend by just under 3% to $1.07 per share. That's hardly a surprise, as the company has been a consistent dividend payer, and once-per-year raiser, since the 2008 corporate split that created it and peer Altria.

However, Philip Morris' recent fundamentals weren't impressive. Net revenue in the second quarter was just over $6.9 billion, a 4% increase on a year-over-year basis but below analyst expectations. Net income slid marginally to under $1.8 billion, well below prognostications.

The disappointing figures were due largely to declines in shipment volumes in nearly every region the company serves, and a persistently strong dollar.

Yet Philip Morris still has good potential. Its state-of-the-art IQOS e-cigarette product has generally done well in the 26 markets it's been made available. Indications are that it'll be cleared by the Food and Drug Administration for sale in the biggest of all, the U.S.

Meanwhile, free cash flow was steady at nearly $7 billion (yes, that's billion) last year, which was sufficient to cover the high dividend. I don't see that dynamic changing anytime soon, especially with the likely coming rollout of IQOS in the U.S. 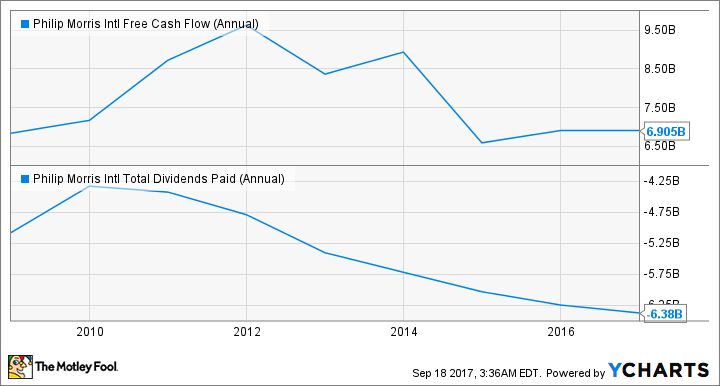 Philip Morris' new distribution is to be paid on Oct. 12 to stockholders of record as of Sept. 27. The payout ratio is typically high for the company -- 94% on Q2 profitability. At the current share price, the new dividend would yield 3.7%. This is well above the 1.9% average yield of dividend-paying stocks on the S&P 500.

Commercial real estate investment trust Realty Income Corp (NYSE:O) has trademarked the self-description "The monthly dividend company," so no prizes for guessing how often it pays its distribution. Last week it declared that its dividend for October will be incrementally higher than its predecessor, at just over $0.21 per share.

Realty Income has managed to grow its revenue and funds from operations (the top profitability line item for REITs) at impressive rates over the years. Its most recently reported quarter was typical -- adjusted funds from operations (AFFO) rose by 7% (to $0.76 per share) on a year-over-year basis, on the back of an 11% increase in revenue to just over $300 million.

The REIT's total occupancy rate, meanwhile, was a nearly full 98.5% -- the highest level in a decade. Realty Income keeps this number up by renting on a very long-term basis, and under net leases (in which the tenant is obligated to pay not only rent, but taxes, insurance, and maintenance).

If we take the company's latest AFFO figure and divide it by the dividend, we get an AFFO payout ratio of 84%. Although that sounds high, we should bear in mind that REITs are required to distribute nearly all their profitability in the form of dividends. Given this REIT's strong and sustained performance, I think this is one of the safer payouts on the market. 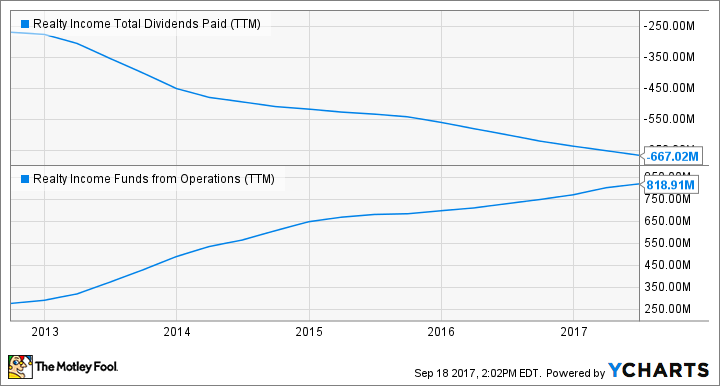 Realty Income's next monthly disbursement will be made on Oct. 13 to shareholders of record as of Oct. 2. It yields a theoretical 4.2%.

Elsewhere in the REIT sector, Store Capital Corp (NYSE:STOR) has elected to hike its quarterly payout by nearly 7% to $0.31 per share.

There are many similarities between Store Capital and Realty Income; both specialize in well-trafficked retail properties and generally rent on long-term, net lease contracts. One difference is that Store Capital has found a lucrative niche in leasebacks, in which an owner of a building sells that property, then leases it back from the new owner. (You can read my take on which stock is the better income investment here).

Like Realty Income, Store Capital's occupancy is sky-high; it came in at 99.5% in the company's Q2. That crowded tenant roster, plus a set of acquisitions, drove revenue up by 24% to $114 million, while per-share AFFO climbed almost 30% higher to $0.44. 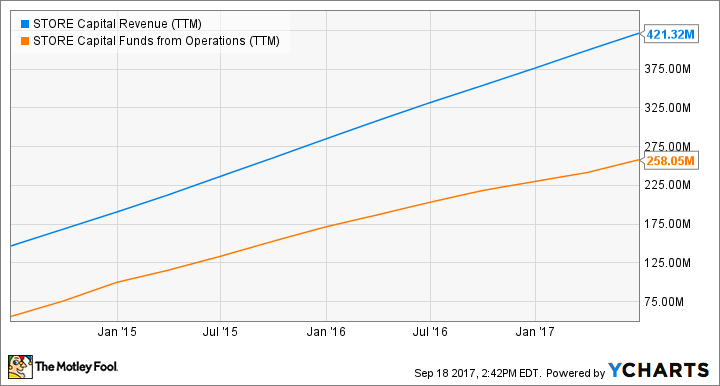 Store Capital is planning to continue its acquisition activity, and I can't imagine those leaseback tenants in particular are aiming to vacate its premises. And at an AFFO payout ratio of a comparatively light 70%, its dividend has room to grow. I think Berkshire Hathaway and the company's many other investors will continue to be happy with this stock.

Store Capital will pay its freshly raised dividend on Oct. 16 to investors of record as of Sept. 29. At the current stock price, it would yield 4.8%.