Please ensure Javascript is enabled for purposes of website accessibility
Log In Help Join The Motley Fool
Free Article Join Over 1 Million Premium Members And Get More In-Depth Stock Guidance and Research
By Dan Caplinger – Oct 8, 2017 at 9:03AM

Find out which stocks held back the market from an even bigger win.

The Dow Jones Industrials (^DJI -1.71%) gained 5% during the third quarter, adding to their gains for the year. Dow investors have enjoyed a rise of about 2,650 points during 2017, and dividends have helped add to the average's total return for investors. Yet some stocks within the Dow have had poor performance and have weighed on the Dow's overall gains. Nike (NKE -12.81%) was the biggest drag on the Dow, but General Electric (GE -1.31%) and Disney (DIS -3.20%) also played their parts in keeping the popular stock market benchmark from producing even more attractive returns. Those who follow these stocks want to know if they can bounce back or will suffer further losses in the future.

Nike has seen its stock stagnate since late 2015, with the revolution in athletic apparel having given way to more intense competition both from domestic up-and-comers and longtime international rivals. The company had come into the quarter on a high note, with rising optimism that the challenges that had hit much of the retail sector might finally be coming to an end. Yet poor results from retailers that primarily sell products from Nike and other athletic-apparel providers sent the shoemaker's stock back downward.

Nike's own fiscal first quarter was plagued by difficult conditions. Sales were flat from year-ago levels, and an almost 24% drop in net income reflected the headwinds Nike faced. With Adidas having done an excellent job of grabbing up market share even in Nike's home North American market, investors are nervous about Nike's staying power. The industry leader still has plenty of opportunities for a turnaround, and Nike still has strong brand presence in markets around the globe. Yet even the hint of vulnerability for the company has been something shareholders have had to get used to seeing, and Nike will have to work hard to restore its image to see share-price gains. 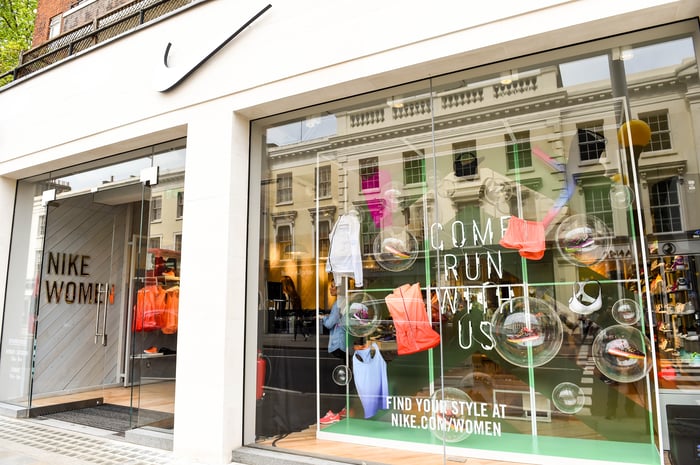 General Electric has had to reinvent itself several times in its history, and not all of its decisions have worked out for the best in the short run. The company's move toward emphasizing financial services backfired during the financial crisis, bringing GE to the brink and forcing it to make a dramatic strategic shift in its aftermath. Re-emphasizing its industrial roots worked for General Electric for a while, but poor timing in its decision to gain exposure to the oil and gas industry held back the stock in recent years.

During the quarter, General Electric's earnings report showed continued pressure on financial performance. Weakness in demand for power has weighed on GE's turbine business, and even though the oil and gas sector is recovering, it will take time for General Electric's energy business to see a rebound in orders. New CEO John Flannery has taken over for longtime leader Jeff Immelt, and Flannery's experience in healthcare could take GE in a brand new direction. Whether that will lead to a turnaround in the stock remains to be seen, but many investors remain uncertain about General Electric.

Disney's woes have been largely related to its cable television industry presence. Strong content production from studios has kept Disney healthy, but as subscriber counts at cable providers go down, so, too, do the revenues that Disney receives as part of cable bundles. Disney is working on its own methods of content distribution, but they'll take time to develop fully and might still not produce as much revenue as its cable deals have in the past.

The quarter brought new challenges for Disney. Hurricane Irma forced Disney to close its Florida theme park, resulting in a short-term loss of revenue. Yet much of the attention focused on the company's financial results, which included flat sales and a 2% drop in adjusted earnings. A blockbuster-heavy period in the year-ago quarter led to big declines in segment sales and profits for the studio division. In the long run, the big question mark is whether Disney will successfully pivot away from cable while keeping hold of its content monetization ability. If it can, then the stock is poised to rise.

Disney, General Electric, and Nike are good stocks, but they face business challenges that are hard to overcome. Each has the ability to find success, but it will take time for them to recover their full potential and satisfy investors who are frustrated with their recent losses.