Please ensure Javascript is enabled for purposes of website accessibility
Log In Help Join The Motley Fool
Free Article Join Over 1 Million Premium Members And Get More In-Depth Stock Guidance and Research
By George Budwell - Oct 24, 2017 at 8:00AM

These two top biotechs both have significant problems to overcome, but one company clearly has an easier road ahead.

Amgen (AMGN 0.93%) and Gilead Sciences (GILD 0.89%) are central figures within the biotech landscape. However, these two titans of the industry are both in the process of refreshing their product portfolios at the moment.

This is therefore an opportune time to consider which of these top biotech stocks is the better long-term buy right now. So let's dig in to reveal which of these biotech giants is more deserving of your hard-earned capital. 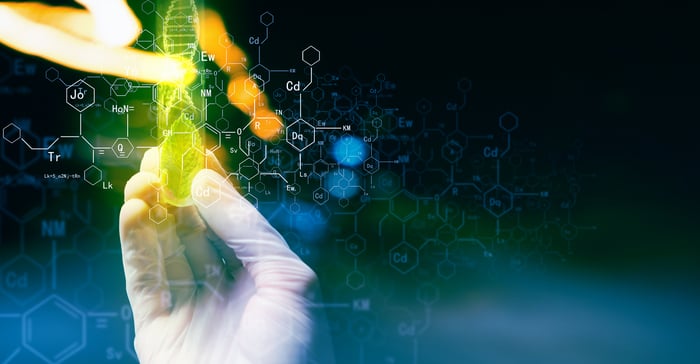 Amgen: Can this top dog overcome its patent headwinds?

Amgen, like many large-cap biotechs, is attempting to overcome the loss of exclusivity for several key products -- such as the blood-conditioning medicines Neupogen and Epogen -- by ramping up its clinical activities. Keeping with this theme, the biotech has so far rolled out its next-generation cholesterol medicine Repatha and its cardiovascular drug Corlanor, and it has gotten the experimental migraine treatment Aimovig into the regulatory stage of its lifecycle. Amgen is also gearing up to launch its Humira biosimilar, known as Amjevita, in Europe in 2018 and the U.S. in 2023.

Even so, Amgen's top line is still expected to muddle along at a compound annual growth rate of about 2% for the next five years, according to EvaluatePharma. This anemic growth profile stems from Amgen's lack of a true franchise-level drug candidate capable of offsetting these significant patent headwinds and delivering solid levels of growth at the same time.

To fix this core problem, Amgen could tap its massive cash reserves of nearly $40 billion to make a splash on the merger-and-acquisition scene, but management has yet to show any signs of going this route. Amgen, after all, has largely stood pat while several of its contemporaries have gladly paid top dollar to bring in new sources of revenue in recent years.

Gilead is also reeling from a sharp sales drop from key drugs at the moment -- namely, its hepatitis C blockbusters, Sovaldi and Harvoni. To reverse this trend, Gilead opened its checkbook recently to buy the adoptive-cell therapy company Kite Pharma, but even this sizable $12 billion acquisition won't reverse Gilead's near-term growth trajectory. For instance, even if Yescarta -- the first cell-based cancer therapy approved from Kite's pipeline -- lives up to its peak sales potential of approximately $1.7 billion, Gilead's top- line is still on track to fall by a staggering 25% over the next four years relative to 2016 levels.

Like Amgen, Gilead's homegrown clinical pipeline is also devoid of a single product candidate that can pick up the slack from a growth standpoint. To be fair, the biotech does have three promising drug candidates in development for non-alcoholic steatohepatitis (NASH) that could radically change this outlook in the years ahead. But the NASH race has become increasingly crowded of late, implying that several drugs may divvy up this high-value indication down the road.

The good news is that Gilead does have the second largest cash reserves among major biotechs -- with Amgen taking first place. So there's a fairly strong chance that Gilead will execute yet another bolt-on acquisition soon to bolster its near-term growth prospects.

When it comes to biotech investing, the market for the most part only cares about top-line growth. And in that sense, Amgen unequivocally has the better outlook right now. Amgen, for instance, can easily add a few choice acquisitions with its industry-leading cash position to generate mid- to high-single-digit growth on a consistent basis. Gilead, on the other hand, probably needs one or more of its high-value clinical candidates in NASH to pan out, as well as another midsize acquisition to achieve the same result. In short, Amgen's less risky path to sustainable growth arguably makes it a more compelling buy than Gilead.