This bank stock has a low dividend yield now, but its quarterly payout has a lot of room to grow.

Citigroup (C -0.99%) has one of the lowest dividend yields among big-bank stocks right now, at 1.1%, but that doesn't necessarily mean that income-seeking investors should avoid the nation's fourth biggest bank by assets. That's because Citigroup's quarterly payout has a lot of room to grow. 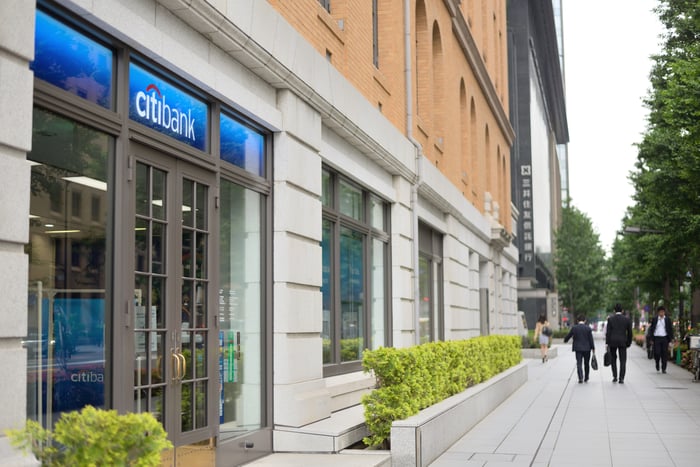 Since the financial crisis, Citigroup has increased its quarterly payout only three times. It started at $0.01 per share in the wake of the crisis, raising that to $0.05 per share in 2015, to $0.16 per share the next year, and to $0.32 per share earlier this year.

That's rapid growth. Any time a company increases its dividend by a factor of 32 in less than five years, it's worth taking note, as the company could very well be signaling that more increases are in the cards.

On top of this, Citigroup is playing catch-up to other large banks. Since 2010, both JPMorgan Chase (JPM -0.65%) and Wells Fargo (WFC -1.50%) have boosted their quarterly payouts annually. The catch is that these banks have gotten approval to do so from the Federal Reserve, which exercises veto power over big-bank capital plans as a part of the annual stress tests, or more precisely, the Comprehensive Capital Analysis and Review. 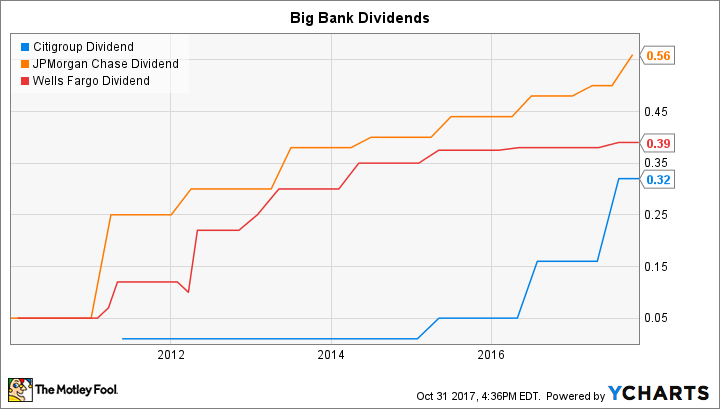 You can get a sense for the upward potential of Citigroup's dividend by looking at the payout ratio. This communicates how much of a company's earnings are distributed via dividends. It's calculated by dividing a company's dividend per share by its earnings per share.

As a general rule, most banks strive to pay out approximately a third of their earnings via dividends, with the remaining two-thirds split roughly evenly between retained earnings and share repurchases. To this end, while JPMorgan Chase is slightly below this, with a payout ratio of 25%, according to YCharts.com, Wells Fargo is nearly right on the mark, with a 32% payout ratio over the trailing 12 months.

Citigroup, by contrast, pays out less than 15% of its earnings. That's half the average on the combined KBW bank indexes. Not coincidentally, it's also well below a third of its earnings, which, again, is what most banks strive to hit.

The net result is that, even though Citigroup has a dismal dividend yield right now, this won't always be the case, as the bank seems intent on catching up with its peers in this regard.