Shares of Bank of America (NYSE:BAC) are surging yet again on Monday, after the Senate voted late last Friday in favor of cutting the corporate tax rate from 35% down to 20%.

There's still work to be done on the tax bill, as it has to be passed by the House of Representatives as well, but the progress sent shares of the nation's second-biggest bank by assets up by 4% in intraday trading today.

All told, shares of Bank of America have climbed nearly 10% in the past week. That compares to a 2% gain on the S&P 500. And if Bank of America's stock sees another day like today, it will eclipse $30 per share for the first time since the financial crisis. 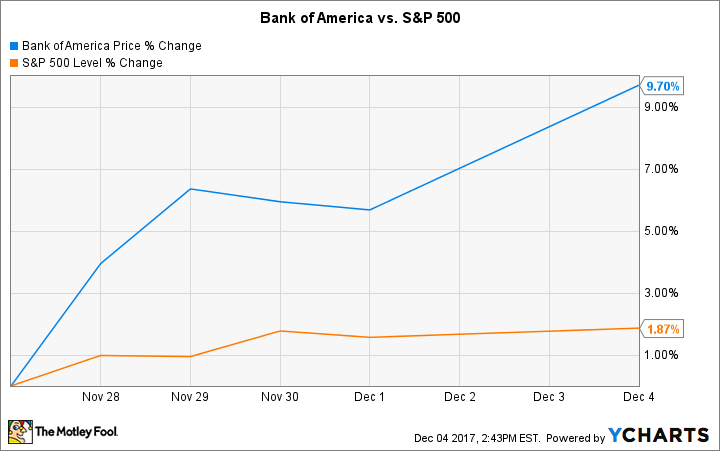 To this end, here's what I wrote at the end of September:

It's almost hard to believe that Bank of America's stock could be closing in on $30 a share, but it is. The reason it's hard to believe this is because, at this time last year, it was trading for well below $20 a share. But then the election hit, and hopes began to rise that the regulatory relief and tax reform promised by then-candidate Donald Trump on the campaign trail would cause profits at banks to soar.

Little has happened on either of these fronts yet, but if there's progress, it isn't unreasonable to think that Bank of America's stock could indeed eclipse $30 a share in the not-too-distant future. 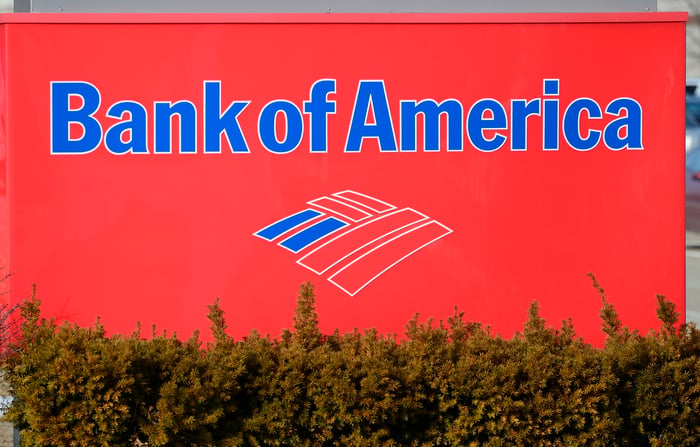 Shareholders of the Charlotte, North Carolina-based bank would be excused for celebrating the ongoing rally in Bank of America's stock. Yet, investors shouldn't allow themselves to be lulled into a sense of complacency.

The market is trading at historically high valuations, exceeded only twice before. The first time was in 1929. The second time was in 1999. Neither instance ended well for investors, as both were followed by large declines.

Moreover, while bank stocks are up, shares of technology companies are down since last Monday. Facebook (NASDAQ:FB) is off 5%, Alphabet (NASDAQ:GOOG) is down 4.5%, and Amazon.com (NASDAQ:AMZN) has dropped by 4.1%. 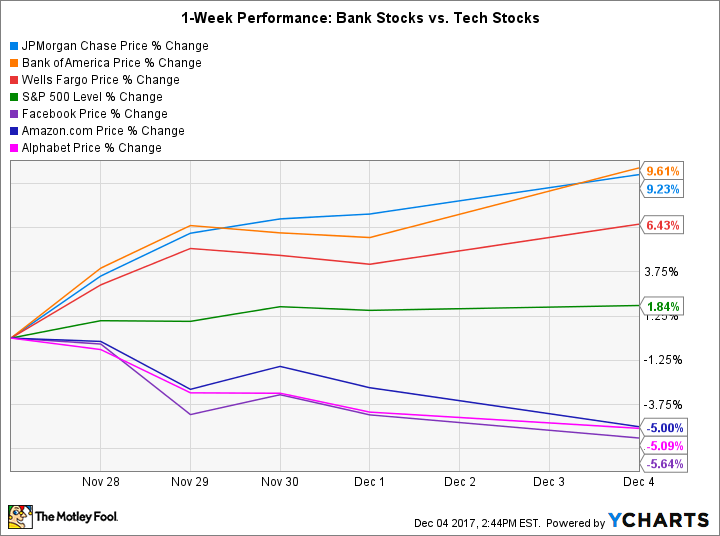 Why the divergence between bank and tech stocks (most other bank stocks are also rallying on hopes for tax cuts)? It's hard to say. But one interpretation is that tech stocks tend to have higher valuations, and could therefore be the earliest stocks to correct, if a correction is indeed in the cards in the near future, as the head of JPMorgan Chase's investment bank recently warned.

Furthermore, investors should look at what happened in the stock market last Friday. Halfway through the day, expected volatility soared while stocks dropped in the wake of the former National Security Advisor Michael Flynn's guilty plea. Stocks largely recovered, but what does this portend about possible future, and potentially even more serious, announcements from the Special Counsel's office? 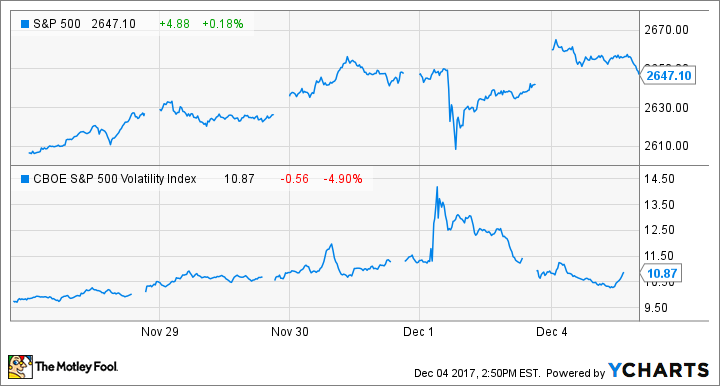 Could this bring to fruition a warning earlier this year from the co-chairman and chief investment officer of the world's biggest hedge fund, Bridgewater Associates? In June, Ray Dalio wrote in a LinkedIn post that:

I don't know the answer to that question, but I can tell you that a lot of the best investors in the United States are worried right now that Dalio may be right.

What is Dalio's advice? Buy gold.