When it was announced last week that Buffalo Wild Wings (NASDAQ:BWLD) would be acquired by private equity group Roark Capital, something strange happened: Shares of Chipotle Mexican Grill (NYSE:CMG) seemed to climb more on the news than did shares of Buffalo Wild Wings.

One reason is that investors had already known the Buffalo Wild Wings deal was in the works. Two weeks earlier, shares of the restaurant chain surged when news of a possible acquisition coursed through the market. As a result, when the deal was officially consummated, Buffalo Wild Wings' stock rallied, but not as much as it had earlier in November.

My colleague Steve Symington wrote this at the time:

This announcement shouldn't be a big surprise. Buffalo Wild Wings stock skyrocketed two weeks ago following reports that Roark Capital had made an offer for "more than $150 per share." But at $157, the final price -- which represents a 38% premium to Buffalo Wild Wings' unaffected 30-day volume-weighted average -- should partly appease concerns among patient investors who found themselves debating whether $150 was good enough to offset Buffalo Wild Wings' potential for even greater long-term returns.

Yet, while this explains the somewhat muted response of Buffalo Wild Wings' stock in the immediate wake of the official deal announcement last week, this doesn't answer the question of why shares of Chipotle responded positively to the news. The answer to that question could rest on hopes that Chipotle could be the next major company in the food industry to be acquired. Shares of Chipotle have lost more than half their value over the past two years. They topped out at the end of 2015, but then cratered after a number of food-borne illness outbreaks at its restaurants caused sales at the burrito chain to tank. Even after they've rallied in the past week, they're still down nearly 60% from their high two years ago.

On the one hand, it doesn't seem like Chipotle would be a takeover target. In 1998, McDonald's (NYSE:MCD) purchased a major stake in the company, only to then exit that stake in 2006 after taking Chipotle public. At the time, McDonald's had an 88% voting interest in Chipotle, making the burger chain far and away Chipotle's biggest investor.

Over the next nine years, Chipotle's growth exploded, as did its share price. When McDonald's sold its stake, Chipotle had approximately 500 locations. Today, the number exceeds 2,200 and is still growing. This growth pushed its stock up 15-fold, from around $50 a share in the beginning of 2006 to nearly $750 a share by the end of 2015. 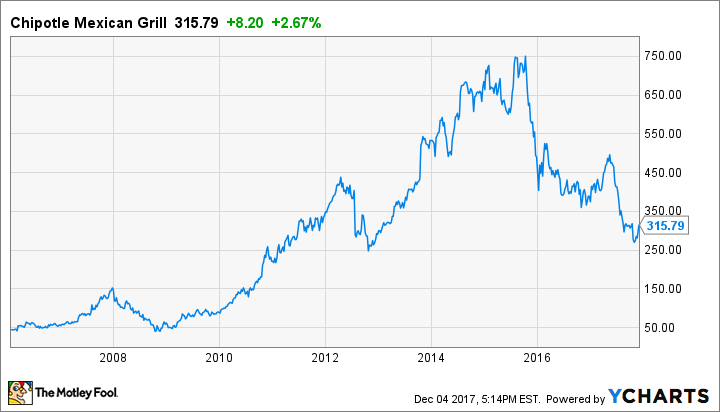 While this might be cited as evidence that Chipotle did better as a stand-alone company, its performance since its shares topped out two years ago suggests otherwise. In the first case, one of the principal issues underlying Chipotle's travails has been its supply chain, which wasn't sufficiently sophisticated to protect against foodborne-illness outbreaks, such as norovirus and E. coli.

It has since made changes to its supply-chain processes, but they have been painful and slow. Moreover, Chipotle's focus on these behind-the-scenes aspects took its executives' attention away from frontline issues, such as service quality in its restaurants, a fact that the chain has sought to correct more recently.

The recent rollout of Chipotle's queso dip, which is disappointing to put it mildly, points to another problem that the company is having: dogmatism. Its business model is predicated on serving fresh, organic, and locally sourced ingredients. These are commendable objectives, but they shouldn't be allowed to interfere with the chain's success, either.

This is exactly what happened in the design and rollout of its queso, which has gotten horrible reviews from customers. The consistency of it is odd, as is the flavor. The problem is that Chipotle refused to use processed cheese. This is consistent with its organic ethos, but it has resulted in a subpar product that has only done further damage to the brand.

Would a more sophisticated parent company have been willing to compromise? There's no way to say for sure. But given that such a company wouldn't have the same personal investment in Chipotle's dogmatic approach to fast-casual food as, say, its founder and departing CEO Steve Ells, it isn't an unreasonable thing to think.

It's for these reasons, as well as the dramatic decline in Chipotle's share price and the ongoing consolidation in the restaurant space, most recently evidenced by the purchase of Buffalo Wild Wings, that one would be excused for thinking that Chipotle could soon become a takeout target.