The man who wrote the book on value investing bought shares of AMC Entertainment. Should you?

In its recent 13F filing, Baupost Group revealed it bought shares of beleaguered movie theater chain AMC Entertainment (AMC 3.48%) in the third quarter. This is notable because Baupost is run by Seth Klarman, one of the most famous value investors and author of the book Margin of Safety. Since the book is out of print, Margin of Safety sells for as high as $700 online! According to CNBC, Baupost has achieved a 16.4% annualized return since the company formed in 1982, greatly outperforming the market.

Baupost has achieved its success by adhering to strict value investing philosophy. In the firm's 2016 annual letter, Klarman wrote:

...we follow a value approach that seeks out undervalued investments with catalysts for value realization. We differ from other funds as a result of our steadfastly long-term, risk-averse orientation, very limited exposure to short selling, involvement in both public and private markets, willingness to hold cash in the absence of immediate opportunity, and 34-year record of strong performance. We refuse to enter Wall Street's ubiquitous short-term performance derby.

AMC Entertainment has been demolished this year due to a declining box office, the prospect of an earlier on-demand release window, and the general switch to a more stay-at-home economy. In addition, the company is highly levered, which is interesting, as it adds a bit of risk to the mix, which Klarman usually shuns.

I actually bought some AMC earlier this year, thinking that the selling was finished, only to see the stock fall even lower. So it made me feel better that at least I had some very famous company! Here's my take on what Klarman likely sees in AMC. Make no mistake, the stock is cheap. You might not be able to tell, as the company has reported GAAP losses recently. However, AMC manages movie theaters, which is very similar to a real estate business, where depreciation (a non-cash cost) can actually be much higher than the actually costs of maintaining the building. Therefore, many people value theater companies on a enterprise value-to-EBITDA basis. 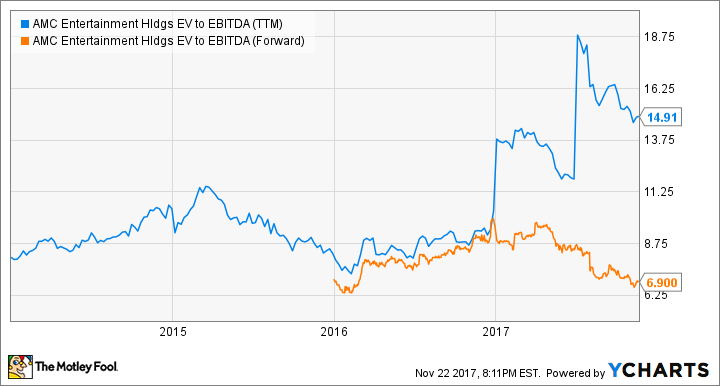 Of course, the company is much more heavily indebted now, due to three acquisitions made over the past year. As debt makes up a greater portion of the firm's value, small changes in the company's business value can lead to big swings in the stock price -- for good or ill.

That seems to be what Klarman sees -- huge upside, should the movie industry bounce back. The company's dividend yield is over 6% and management is buying back stock, so shareholders are getting paid to wait.

While I obviously see big potential here, AMC doesn't exactly scream "risk-off" and AMC is a relatively small position in my portfolio. It's not a big part of Klarman's, either, as Baupost's 3.6 million-share stake (roughly $46 million) makes up only 0.65% of his overall portfolio.

The big question revolves around the overall health of the movie industry. So far this year, box office gross is down about 4.5% relative to 2016, but that was an all-time high. The industry has been able to grow in recent years even though traffic has been (slightly) declining, due to higher prices for things like premium recliner seats and upgraded food and beverages. That stability is why AMC management thinks its debt ratios are OK. However, if there were to be a rapid break from the past, AMC could be hard-pressed to keep its dividend and pay down its debt.

As always, it's good to monitor what famous investors are buying and selling. Just make sure that you believe in the company, too, and aren't merely blindly following what others are doing.