When we talk about buying stocks at The Motley Fool, we generally do so with at least a five-year time frame in mind. After all, buying and holding strong businesses for the long term and letting your gains compound is arguably the greatest way to consistently create wealth.

But what if we stretched that time frame out even longer -- say, to a period of decades? How do you find businesses with the potential to stand the test of time and deliver market-beating gains in the process?

To that end, we asked three top Motley Fool investors to each pick a stock that they think investors can buy and hold for the next 25 years. Read on to learn why they chose Under Armour (NYSE:UA)(NYSE:UAA), Boeing (NYSE:BA), and Repligen (NASDAQ:RGEN). 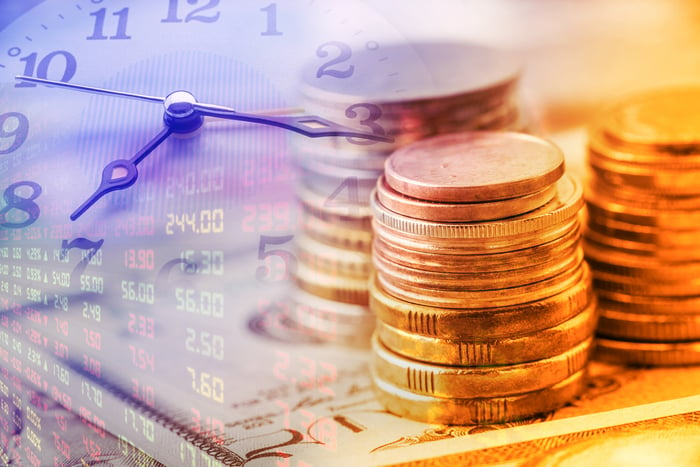 Buy this beleaguered name while it's still down

Steve Symington (Under Armour (C Shares)): I admit that Under Armour sure doesn't feel like a growth stock of late. Last quarter, the athletic apparel and footwear specialist saw revenue decline on a year-over-year basis (down 4.5%, to $1.4 billion) for the first time ever since it went public in 2005. Management primarily blamed a slowdown in its core North American business, where multiple sporting goods retailer bankruptcies and heightened competition caused revenue to tumble 12%. But North America still represented nearly 77% of total company sales, and shares of Under Armour plummeted 21% the following day as a result.

But there were bright spots in the report that I think are more indicative of Under Armour's long-term direction. Direct-to-consumer revenue climbed 15% year over year, for example, growing to a third of total sales. And international revenue skyrocketed 35%, to just over 22% of total sales.

Naturally, Under Armour is restructuring its business to not only focus on fostering these outperforming areas and stabilizing its North American business, but also to reduce product development times, place more emphasis on returns on investment when allocating capital, and bolster its operating leverage going forward. In the end, it should emerge a stronger, more efficient company for its efforts -- and one poised to resume sustained, profitable growth over the long term.

Under Armour stock has fallen 54% in 2017 as of this writing. But I think that drop is a gift for patient, long-term investors who believe that, decades from now, Under Armour will be a significantly larger company than it is today.

Rich Duprey (Boeing): You might not think of an aerospace giant with a $162 billion market valuation as a growth stock, but Boeing ought to fit the bill anyway. It's all a matter of outcome, not semantics.

Boeing has been on a tear over the past year, with its stock soaring 78% to new record highs. Although it's a cyclical stock and will undoubtedly hit some turbulence here and there, over the next 25 years we're going to be seeing this industry behemoth taking a new trajectory higher.

Since the recession, Boeing has seen its performance improve. Over the last five years, earnings grew at a respectable near-8% rate annually, but analysts are looking for the aerospace leader to virtually double that rate of growth each and every year for the next five years.

That's going to come about on the basis of it phasing out the aging 747 aircraft and integrating the new 737 MAX family of aircraft (especially the MAX 10), which earlier this year secured the greatest number of orders of any aircraft from any manufacturer at the Paris Air Show.

Management also believes it can maintain the pace it's been on and is betting its stock will maintain its lofty altitude because it is using its shares to make up part of the massive $20 billion shortfall in its pension funding scheme. That's a risky maneuver that it may one day rue, but for investors in Boeing, it's a decision that will likely smooth itself out over the next two-and-a-half decades.

Maxx Chatsko (Repligen): Many investors are drawn to the allure of biopharma stocks for their potential to deliver eye-popping gains. Of course, that comes with symmetrical risks spanning regulatory, technical, and financial. Wouldn't it be great if there was an investment that allowed you to tap into the high growth industry without all the risks from the clinic and elsewhere? I think Repligen is that investment.

The $1.6 billion bioprocess company is an integral partner to the biopharma industry. Its core product, Protein A ligands, which purify monoclonal antibodies destined for therapeutic use as biologic drugs, are used in the biomanufacturing of 70 products on the market today and another 300 in development. Repligen has only just begun to scratch the surface in the high-growth market, but has chosen to not rest on its leading position.

Instead, the company's management team has aggressively acquired its way into several other purification product portfolios that the biopharma industry cannot function without. That includes a heavy focus on single-use products and processes, which have been rapidly adopted throughout life sciences fields in recent years for their ease of use (pre-packaged and no need to sterilize) and time saving attributes.

There's no sign that the flood of acquisitions will stop anytime soon, which is great news for long-term investors -- and the company's impressive growth. For the first nine months of 2017, Repligen reported product revenue of $99.5 million. Compare that to $47.5 million in product revenue for the entirety of 2013. Or consider that the latest acquisition, announced in June, will boost product revenue by $50 million in 2018.

Simply put, this is a high-growth stock that has embedded itself into the most important processes of the biopharma industry. It won't be going anywhere -- or running out of growth opportunities -- anytime soon.

There's no way to absolutely guarantee that these three stocks will beat the market in the next 25 years. But if all goes as planned -- whether its Under Armour's turnaround, Boeing's industry leadership and favorable long-term trends, or Repligen's enviable position in biopharma and knack for acquisitive growth -- they should each be poised to handsomely reward patient investors in the process.