Please ensure Javascript is enabled for purposes of website accessibility
Log In Help Join The Motley Fool
Free Article Join Over 1 Million Premium Members And Get More In-Depth Stock Guidance and Research
By Brian Feroldi - Dec 31, 2017 at 8:43AM

Management just padded its wallet by selling off its SurgiBot system, but what's next for the robotic surgery upstart?

2016 was a rotten year for TransEnterix (ASXC -4.04%). Shares of the robotic surgery challenger were down in the dumps after the FDA rejected its application for the SurgiBot System. With a dwindling stock price and battered balance sheet, it was hard to blame investors for giving up hope.

2017, by contrast, has been a year to remember. Shares have rebounded sharply and are currently up more than 75% since the start of the year thanks to a big regulatory win. That favorable turn of events has some investors thinking that this company's troubles might finally be a thing of the past.

So, is it finally time to become a bull, or is caution still warranted? 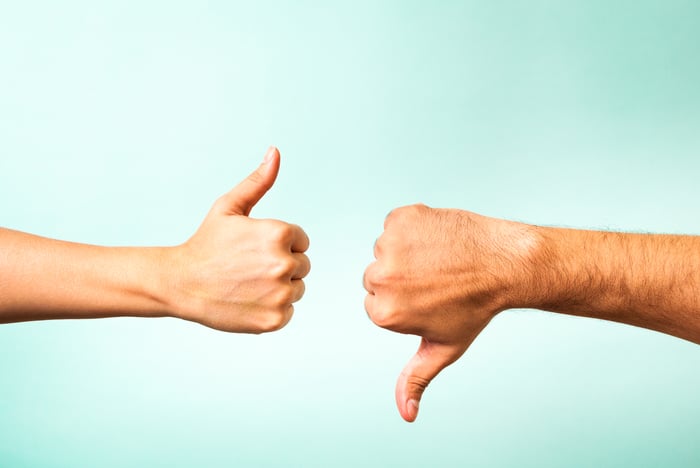 The robotic surgery movement was kicked off in 2000 when Intuitive Surgical (ISRG 2.69%) won FDA approval for its da Vinci system. Fast forward to today, and there are now 4,271 da Vinci systems in active use worldwide. Management expects that those systems will be used to perform more than 860,000 procedures in 2017 alone.  What's more, the company's razor-and-blade business model should help it pull in more than $3 billion in high-margin revenue this year.

Given Intuitive's massive success, it is no surprise to see that plenty of other companies have sprung up to get in on the action.

One of those challengers is TransEnterix, whose original answer to the da Vinci was to develop a product called the SurgiBot. This robot had a much smaller footprint than a da Vinci, making it easier (at least in theory) to share the device between multiple operating rooms. The SurgiBot also promised to allow surgeons to do their work right next to the patient instead of from behind a console. When combined with an advanced camera, haptic feedback, and a price tag that was 66% less than the competition, TransEnterix was feeling good about SurgiBot's chance to disrupt the market.

However, all of that thinking went out the window when the FDA rejected the SurgiBot. Management was left scrambling and decided to halt development of the SurgiBot altogether and throw their weight behind an acquired product call Senhance (or ALF-X at the time) instead.

Thankfully, the company's decision to mothball the SurgiBot and focus on Senhance looks to have been the right call. TransEnterix successfully won FDA approval for the Senhance in the fall of 2017, and it started the commercialization process soon after.

Like the SurgiBot, Senhance offers a number of advantages over the da Vinci. This includes haptic feedback, eye-sensing camera control, an open product architecture, and most importantly, fully reusable instruments.

Shares skyrocketed when the news of FDA approval was handed down, and management jumped at the chance to raise cash at favorable prices. While TransEnterix's cash balance was only $31 million as of the end of the third quarter of 2017, that number jumped to over $100 million less than a month later. If current spending levels persist, that $100 million should be enough to fund operations for at least two years.

What's more, the company also rang up its first U.S. Senhance sale within a few weeks of the FDA approval. That sale should give bulls at least some confidence that the Senhance is the real deal.

While TransEnterix's recent capital raise provided it with some much-needed breathing room, management recently announced some other good financial news. TransEnterix has reached a deal to sell its SurgiBot System to a China-based company called Great Belief International Limited (GBIL). The sale will bring in a total of $29 million over the next couple of years and will still provide TransEnterix with an option to distribute (or co-distribute) the SurgiBot outside of China.

While the deal certainly won't solve all of the company's financial issues, it does buy management some more time to focus on the Senhance launch.

Is TransEnterix finally a buy?

Bulls will argue that the recent chain of events leaves TransEnterix in great financial shape and that the fast Senhance sale in the U.S. is proof that there is pent-up demand for a da Vinci alternative.

Bears will point out that the company is still losing money hand over fist, and that you shouldn't credit the first U.S. Senhance sale to its commercial team.

While both points of view certainly have their merits, I still think siding with the bears makes the most sense at this point. However, I'd be quick to change my tune if we see U.S. Senhance sales really start to gain traction.

Until that happens, though, I think that skepticism is the right course of action.