Shares of Roku Inc. (NASDAQ:ROKU) popped 17.9% in December, according to data from S&P Global Market Intelligence, as investors speculated it could benefit greatly from Disney's (NYSE:DIS) impending acquisition of most of the assets of Twenty-First Century Fox (NASDAQ:FOX)(NASDAQ:FOXA).

To be clear, Roku was already up modestly early in the month, aided by the momentum of its stellar quarterly report in November. But the bulk of Roku's gains over the past month came after Disney's Dec. 14 announcement of a $52.4 billion all-stock deal to acquire not only Fox's film and TV studios, but also select cable and international TV businesses and a controlling stake in Hulu. 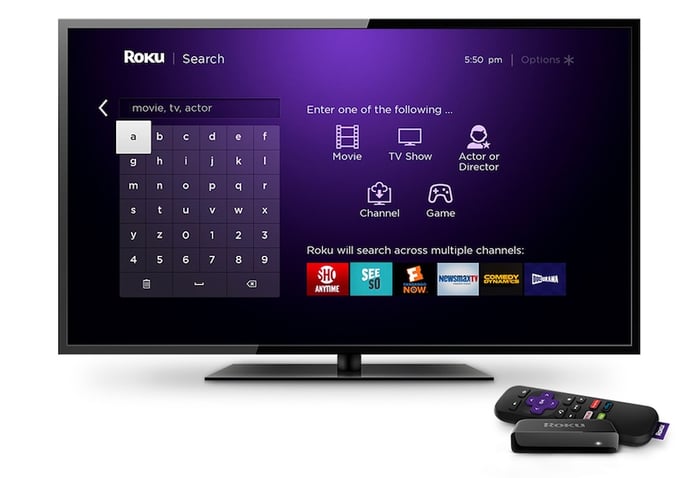 As I wrote shortly after the deal was made public, Roku should benefit on a least two fronts. First, while Fox will spin off its broadcasting network and stations into a separate publicly traded company, it also opted to keep a significant stake in Roku through the process. This move amounts to an encouraging vote of confidence in Roku's longer-term success.

Second, the combination of Disney's new entertainment properties -- which will include assets such as X-Men, Deadpool, Fantastic Four, Avatar, and The Simpsons, to name only a few, as well as regional sports networks, and National Geographic -- with the technical capabilities of Hulu should provide it the scale it needs to even more effectively implement plans to launch both an ESPN-branded multi-sport streaming service in 2018, and a Disney-branded entertainment streaming service in 2019. Roku, for its part, should win as as Disney helps accelerate the shift of ad dollars and viewership to streaming products and services like the ones Roku provides. Roku should also receive a cut of Disney's subscriber revenue if viewers use its platform to sign up.

To be clear, the Disney-Fox deal won't materially contribute to Roku's top or bottom lines in the near term. But our market is a forward-looking machine, and last month's gains reflect as much. So for now, as investors anticipate the entertainment industry's next big winners, Roku stock appears to be one of the most intriguing ways to put your money to work.