Last month, Sprint's (NYSE:S) CFO Tarek Robbiati told investors at a conference that he expects the company's service revenue to start to turn around in the last quarter of 2018. He also said the company plans to increase its pricing on some of its service plans as it looks to invest more in capital expenditures.

But at least one analyst thinks the goal of reaching revenue growth in 2018 is a bit of a stretch. BTIG analyst Walter Piecyk lowered his expectations for Sprint and wrote that it's unlikely Sprint will show service revenue growth at any time in 2018 in his analyst note. With the recent shakeup at the CFO position (Robbiati will leave at the end of the month), Sprint might take the opportunity to temper expectations as well. 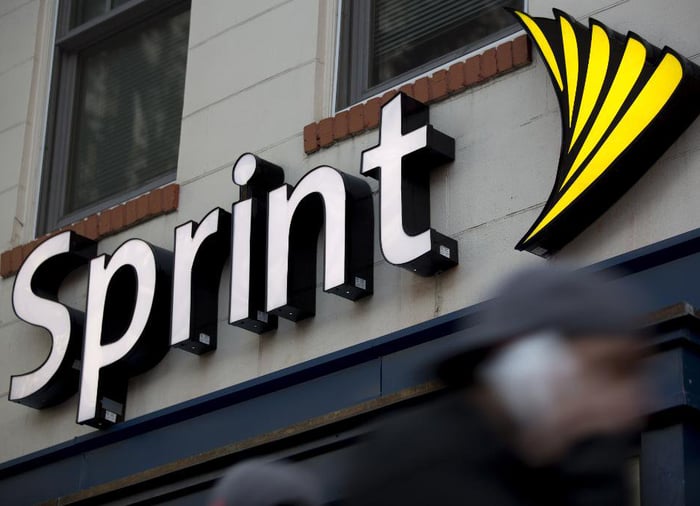 Sprint's biggest competitive advantage is its pricing. Its prices are lower than everyone else's in the industry, and it's put significant pressure on AT&T (NYSE:T) and Verizon (NYSE:VZ) to lower their pricing as well. But Sprint's aggressive pricing has led to declining service revenues for everyone in the industry (including itself) except T-Mobile (NASDAQ:TMUS).

Sprint's decision to raise its pricing, though, is a double-edged sword. Sprint's average revenue per user may increase, but it could find itself with fewer users.

Sprint has seen an increase in subscriber churn this year as old price promotions expire for existing customers. It currently has the highest churn rate of the four major competitors by a wide margin.

Revenue growth shouldn't be the focus for Sprint right now

Sprint is currently reeling after its merger talks with T-Mobile fell apart once again. It now faces the challenge of surviving on its own, and that means building a better network in order to actually compete. To that end, Sprint is planning to triple its capital expenditures to between $5 billion to $6 billion, which puts it roughly in line with T-Mobile's spending.

T-Mobile has notably improved its network over the past few years by foregoing meaningful cash flow. Now that its network is competitive, it expects huge cash flow growth over the next few years.

Sprint needs to take a similar long-term view at this point if it has any chance of surviving on its own. Investors shouldn't worry about whether it returns to service revenue growth in 2018, even though larger competitors like Verizon expect to do as much later this year.

Sprint has a boatload of untapped wireless spectrum it's set to deploy. The high frequency of the spectrum makes it great for the high speeds consumers demand today, but it also requires cells placed more closely together than lower-band spectrum. If Sprint diligently invests in building out its network, it could eventually have a competitive service to offer.

Raising its prices should increase its revenue per user, but it won't increase its service revenue in the near term. The move should help provide the capital needed to invest in the network in order to survive long-term, and that's the most important thing for Sprint and its investors right now.