Ford Motor Company (NYSE:F) said its sales in China fell 6% in 2017. A change in government incentives, stepped-up competition from domestic Chinese automakers, and a dearth of new products combined to set the Blue Oval's Chinese effort back after several years of growth.

Several of Ford's rivals were able to post year-over-year gains in China in 2016. Among them was a 4.4% year-over-year increase in sales for Ford's old Detroit nemesis, General Motors (NYSE:GM). A few years ago, Ford's Focus was one of China's best-selling cars. But sales fell 30% in 2017. Image source: Ford Motor Company.

Ford's 2017 sales decline in China is a reversal after several years of good growth in the world's largest new-car market. 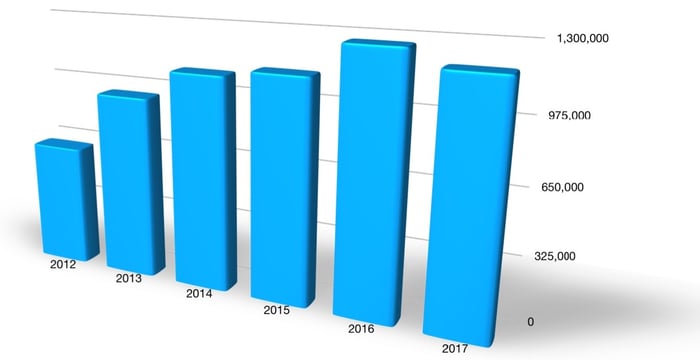 What happened? There were a few factors that put pressure on Ford's China sales totals last year.

First and foremost, on January 1, the Chinese government's sales tax on small-engine vehicles rose from 5% to 7.5%. Many buyers had rushed to get their cars before the increase took effect; the result was a big drop in small-car sales in the first part of 2017. That put a big dent in Ford's sales of models like the Focus early in the year.

That competition put pressure on Ford to cut prices coming into 2017, pressure that Ford initially tried to resist. The upshot: Ford lost quite a few sales of models like the Kuga (the Chinese version of the Escape) before it finally cut prices on several models midyear.

A third factor: By the standards of China's market, most of Ford's product lineup is old news. Because of its huge size and the huge number of automakers competing for sales, China's auto market moves very quickly. The global automakers that succeed are the ones that have new products arriving in their showrooms every few months, and that give their big sellers frequent updates.

But for Ford, 2017 was a quiet year on the product front. Ford's products still attracted plenty of buyers, but the company's big sellers are no longer the shiny new entrants they were a few years ago.

Ford got a new CEO in May: Jim Hackett. Hackett recognized early on in his tenure that Ford's China operation needed a Chinese-speaking leader who had a deep understanding of the local market. That's something that, surprisingly, Ford hadn't had -- but it does now, with Jason Luo (a Chinese-speaking American) at the helm since August.

Ford will also look to reduce costs in its Chinese operation, part of a global effort to contain cost growth that Hackett hopes will boost Ford's operating margin over time.

The upshot: Ford has a China turnaround under way

2017 showed clearly that Ford's China operation needed a rethink. The plan announced by Hackett and Luo in December seems to include the right things; we'll see how well it works over the next couple of years.

But investors should take note: A needed overhaul is now under way for Ford in China.