Excluding the current government shutdown, which may be resolved shortly, the U.S. government has only been shut down for more than one trading day on three occasions, twice in a short period from 1995 to 1996, and once more in 2013. Amusingly, the stock market shrugged off every single shutdown, with stocks gaining all three times.

What happens during a government shutdown?

Honestly, not much. Most federal government offices effectively close their doors to everyone but the most essential employees. What services or employees are "essential" can depend on the timing of the shutdown, and the government department.

The Securities and Exchange Commission, the primary regulator of the financial markets, has about 4,600 employees, but only about 300 will go to work while the government is shut down, for example. However, the Internal Revenue Service, which has approximately 80,600 employees, will furlough a smaller percentage of its staff, given the upcoming tax season. 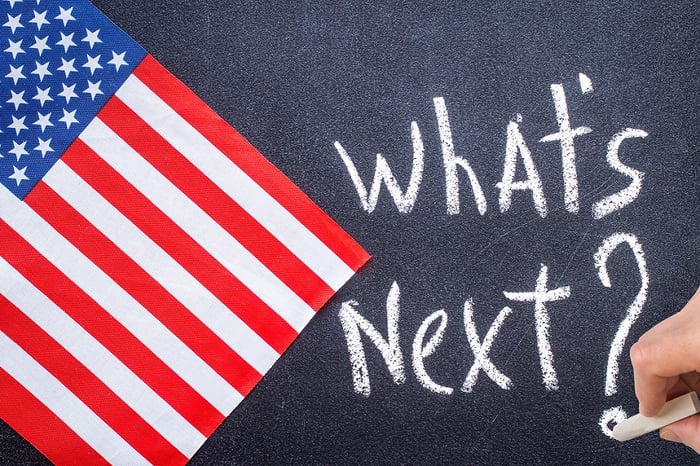 In this sense, "shutdown" is kind of a misnomer. Your mail will still get delivered, Social Security payments will continue, and the Department of Homeland Security will be almost completely operational, as only about 13% of its staff will be furloughed. The stuff that really matters -- cynically, the government functions that might influence how Americans vote at the polls -- will effectively go on as if it were just another day.

As a result, it's business as usual for almost everyone who isn't a government employee. That means you'll be able to buy and sell stocks, though history says you should probably do more buying than selling. That's because during the three most recent major government shutdowns, stocks actually went up, not down.

Here's how stocks performed during each major government shutdown to date.

A bitter battle between opposite sides, led by Newt Gingrich and President Bill Clinton, ended with a short government shutdown from Nov. 14 to Nov. 19, 1995. In all, approximately 800,000 workers were furloughed during the period. I regard this as the first "real" government shutdown, considering it was the first time a number of agencies and departments closed up shop for a period longer than one day. 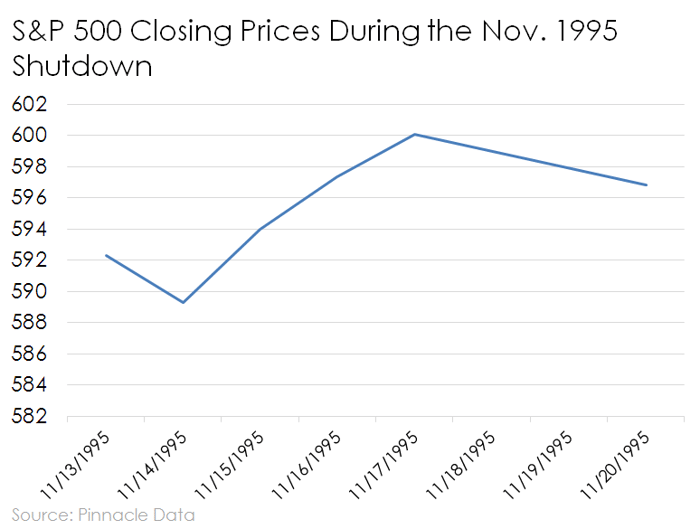 Though the S&P 500 declined in the first day, stocks actually gained by the time the November 1995 government shutdown came to an end. Stocks rose about 0.8% over the period, a nice return for all of one week's time.

Over the holiday period spanning from Dec. 16, 1995, to Jan. 6, 1996, the government was shut down once again. In all, about 284,000 workers were furloughed, fewer than the 800,000 employees who were furloughed one month earlier. Stocks initially fell in value on the first day of trading during the shutdown, but ultimately ended up with gains when it was all said and done. The second shutdown of 1995 is an interesting one because it happened during the holiday period in which the stock market was closed for two days in observance of Christmas and New Year's Day. Stocks gained about 0.3% during this shutdown, as measured by S&P 500 closing prices.

After nearly 18 years of relative peace in Congress, the U.S. government was shut down for a brief period spanning from Oct. 1, 2013, to Oct. 16, 2013. As many as 850,000 federal employees were furloughed at the peak, while another 1.3 million were required to clock in without knowing when they might be paid for their work.

While the "Obamacare" fights may have been nasty within the confines of Congress, no one seemed to care on Wall Street. Stocks gained on the first day of the shutdown, and closed about 3.1% higher on the day after the shutdown ended. 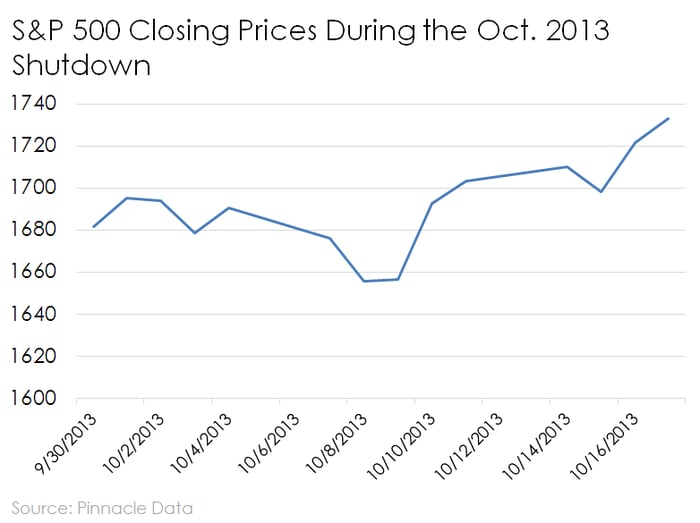 If you asked most people, I suspect most would say that government shutdowns would be bad for the stock market. But the historical data reveals the opposite: Stocks tend to rise during serious government shutdowns in which hundreds of thousands of employees are furloughed for more than one trading day.

In truth, stock prices are almost random over short periods of time. It's important to remember that stocks derive their value from market expectations over periods that span years, if not decades. In the grand scheme of things, that some federal government services will operate with a skeleton crew of workers until the tug-of-war ends in Congress is a relative nonevent.

For this reason, there's no need to panic over the current government shutdown and what it means for your stock portfolio. It may cause some inconveniences in your daily life, but there's no historical precedent for federal employee furloughs resulting in meaningful price fluctuations in the stock market.