Restaurant stocks can be appealing investments for a number of reasons. It's a timeless industry that has proven more resistant to e-commerce disruption than retail, and restaurants offer a level of accessibility to investors that most industries don't. If you're curious about a restaurant stock, you can visit one of its locations, sample the food, see how big the crowd is, and maybe even get a view into the kitchen or ask a front-line employee how business is going.

Such a visit won't replace the knowledge gained from examining a company's financial statements, but you can learn things that you won't see in the numbers.

Following a boom among fast-casual restaurants in the post-recession years, restaurant growth has slowed down more recently, and the industry appears to be getting oversaturated. According to the Census Bureau, sales at restaurants and bars in the U.S. last year grew just 2.8%, the slowest pace of growth since 2009 and lagging behind the 4.4% increase in retail sales last year.

Some have deemed this slowdown a "restaurant recession" as same-store sales, a key industry metric that strips out the effect of new store openings, have declined for much of the last two years. According to data analysis firm TDn2K, same-store sales rose 0.4% in the fourth quarter, breaking a two-year streak of declines. However, traffic, or the number of customers making orders, still fell 1.9%. 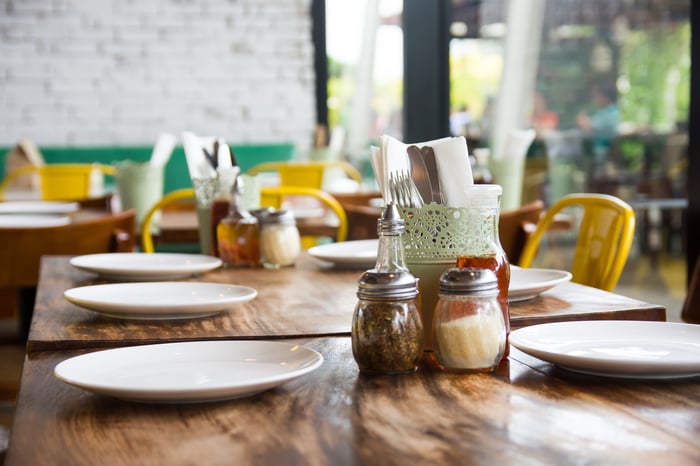 A range of options

Still, some companies have managed to thrive in spite of headwinds. The chart below shows a range of restaurant stocks and how they've performed over the last year and the last five years.

Chipotle looks like the worst of the bunch. It's been the worst performer over the last one-year and five-year spans, and is the most expensive based on P/E except for GrubHub. The burrito roller was once a market darling and essentially pioneered the fast-casual revolution, but its E. coli crisis in 2015 drove customers away, and the company has yet to find a way to bring them back; efforts like its queso rollout have fallen flat. More recently, the stock has moved higher on anticipation of a new CEO, as the company launched a search for a new leader at the end of November.

McDonald's may offer the best example of the kind of impact a new CEO can have. Since Steve Easterbrook took over the Golden Arches in March 2015, shares have nearly doubled as Easterbrook has boosted performance with tactics like all-day breakfast and a revamped dollar menu, as well as refranchising restaurants abroad. As a result, McDonald's is significantly outperforming the restaurant industry: global comparable sales jumped 6% in its most recent quarter, and were up 4.1% in the U.S. Earnings per share increased 55% in the quarter.

Darden Restaurants, the parent of Olive Garden, Red Lobster, and other chains, has undergone a similar turnaround thanks to a new direction. Activist investor Starboard Value took a stake in the company in 2013 and shook up operations, improving the food quality at Olive Garden with enhanced breadstick recipes, streamlining kitchen procedures, and focusing on alcohol sales. In its most recent quarter, Darden posted 3.1% same-store sales growth, and the company increased its guidance for fiscal 2018.

Domino's may offer the best evidence of what a turnaround can mean for investors. The stock is up 1,700% over the last decade thanks to a bold plan from outgoing CEO Patrick Doyle. In a TV ad campaign in 2010, Doyle admitted that the company's product was bad, repeating complaints including that the crust tasted like cardboard. Doyle committed to improving the food quality, and the company came up with new recipes for its dough, cheese, and sauce.

More recently, it leveraged technology to make it easy to order through a number of online channels -- offering customers the chance to order through Twitter, or even using emoji -- and added features like the "pizza tracker," which allows customers to see what stage of the production process their order's in. Menu expansions to items like chicken have also helped juice sales. In its most recent quarter, domestic same-store sales increased to 8.4%, driving a 32% increase in EPS.

Finally, Grubhub is not a restaurant chain but an online takeout platform. Still, it deserves to be included in this group of stocks as the company is growing quickly and disrupting the industry, putting pressure on incumbents to improve their own delivery options. Grubhub has grown over the years through acquisitions, recently taking over Eat24 from Yelp, Foodler, and 27 of OrderUp's markets from Groupon, and those deals have helped the company consolidate its lead in online food delivery, resisting challenges from Amazon and Uber and dominating a number of large markets like New York and Chicago. In its most recent quarter, revenue increased 32% to $163.1 million. 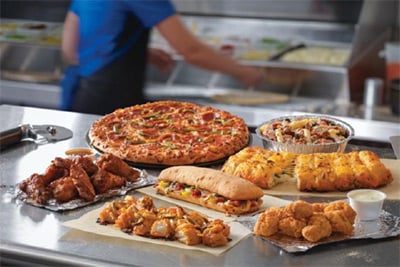 The cream of the crop

An argument can be made for any of the five stocks above, as all but Chipotle had strong performances last year, and some see Chipotle as an attractive turnaround play if the burrito chain can overcome recent challenges.

However, there's one stock that I believe is the most appealing of the bunch: Domino's Pizza. Not only has Domino's delivered outstanding comparable sales growth in recent years, but it also has tailwinds that peers like McDonald's and Darden don't, like the growing popularity of delivery. More restaurant chains are turning to digital ordering and even delivery to add convenience, but Domino's is years ahead of other restaurant chains on this front. Delivery is also built into its model, so it should benefit from the natural growth in such orders.

Additionally, Domino's is still rapidly growing its store count, unlike McDonald's or Darden, and still has plenty of room to grow abroad. In the most recent quarter the company added 217 locations, 164 of them overseas, and has opened 1,182 new restaurants over the last year. Today it has more than 14,400 locations globally. Considering that McDonald's has more than 35,000 restaurants around the world, Domino's should have plenty of room to expand abroad as long as the demand is there.

While the departure of CEO Doyle adds some risk to the stock and Domino's is pricier than McDonald's or Darden on a P/E basis, the stronger growth prospects make it the better bet, and it should continue to be a standout play in the restaurant industry.