President Donald Trump's Tax Cuts and Jobs Act (TCJA) is spurring optimism and hiring in the U.S. -- at least that's how the latest results and commentary from leading staffing company Robert Half International Inc. (NYSE:RHI) show it. The company reported a good fourth quarter and indicated it had passed an inflection point in its staffing activities.

In case you're wondering about the income-per-share decline, Robert Half updated investors in December regarding a non-cash tax charge of approximately $0.27 to $0.31 it would be taking as a consequence of the TCJA. Iif the reported $0.27 tax charge were added back in, Robert Half's diluted income-per-share would be $0.65 -- a figure at the high end of the guidance of $0.60 to $0.66 given on the third-quarter earnings call. 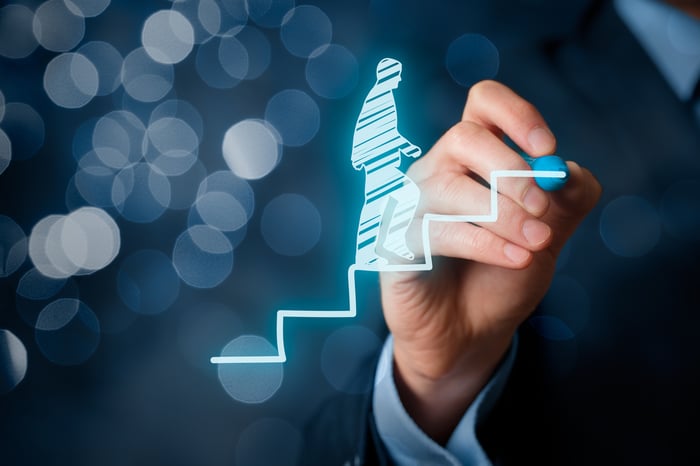 All told, the company's results came in toward the high end of guidance and management's commentary indicated there was more to come. If there was a disappointing aspect to the results, it came from margin performance. As you can see below, gross margin didn't expand as much as one might expect in a period of good growth for a cyclical company, and operating margin actually declined in the quarter, resulting in a paltry 3.3% increase in operating income.

The problem appears to be isolated to the temporary and consultant staffing operations. In fact, it was the only revenue stream that reported any decline in margin -- operating margin declined to 8.3% from 9.4% in the same quarter last year in temporary and consultant staffing. It's important because the business activity was responsible for nearly 70% of operating income in 2017.

However, it's not so bad, for two reasons.

First, CFO Keith Waddell was asked about the matter during the earnings call and put it down to a selling, general, and administrative (SG&A) expense increase of 7.6%, due mainly to "head count and tech investments." In a nutshell, the company has been investing in order to prepare for future growth, but it's clearly had an impact on SG&A expenses as the new hires settle in and technology is implemented.

Sticking with the numbers for the moment, here's how Waddell outlined the following business trends. As you see below, the company exited with stronger growth rates. Incidentally, Waddell noted that January temporary and consulting revenues were impacted by storms on the East Coast.

So trends through the quarter are positive, and a look at the whole quarter shows broad-based strength. Moreover, improvement in temporary hiring has followed the improvement in permanent hiring, just as management indicated it would on the second-quarter earnings call. 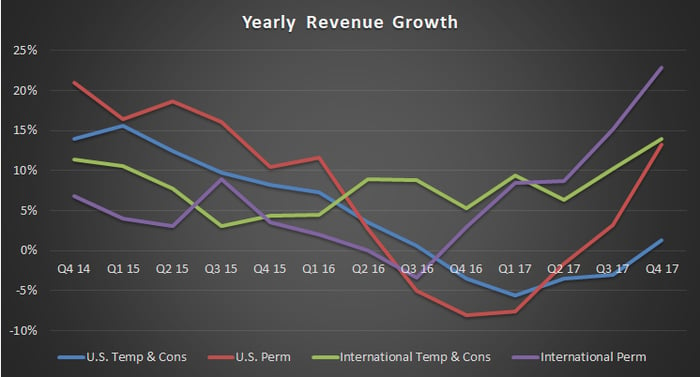 Turning to the question of current and future trading and whether the TCJA had impacted business conditions, here are a few things management said:

Management guided toward revenue in the range of $1.335 billion to $1.395 billion for the second quarter, representing growth of 4.3% at the midpoint on a comparable basis, while income-per-share guidance of $0.70 to $0.76 implies 18% growth at the midpoint. However, if U.S. GDP growth keeps accelerating and business sentiment improves further, then Robert Half could surprise on the upside.