Please ensure Javascript is enabled for purposes of website accessibility
Log In Help Join The Motley Fool
Free Article Join Over 1 Million Premium Members And Get More In-Depth Stock Guidance and Research
By John Rosevear - Feb 1, 2018 at 10:33AM

It got a little help from interest rates and the tax-man.

If you were paying attention during 2017, the lower pre-tax profit shouldn't have been much of a surprise. Ford has been dealing with higher commodity costs and some unfavorable exchange-rate movements (mostly related to Brexit) all year.

Subtract $800 million from $5.7 billion, and we see that the difference between Ford's pre-tax and after-tax profit improved by a whopping $4.9 billion year-over-year. Where did that come from?

A $3 billion "gain" from a pension forecast

At the end of every year, Ford recalculates its likely pension obligations in light of changes to things like interest rates, a process that Ford refers to as "remeasurement." The changes (for better or worse) appear as a special item in the fourth quarter of every year.

In 2016, the discount rate dropped, raising Ford's pension liability significantly: The company took a special item of almost $3 billion related to its annual pension remeasurement in the fourth quarter of 2016. 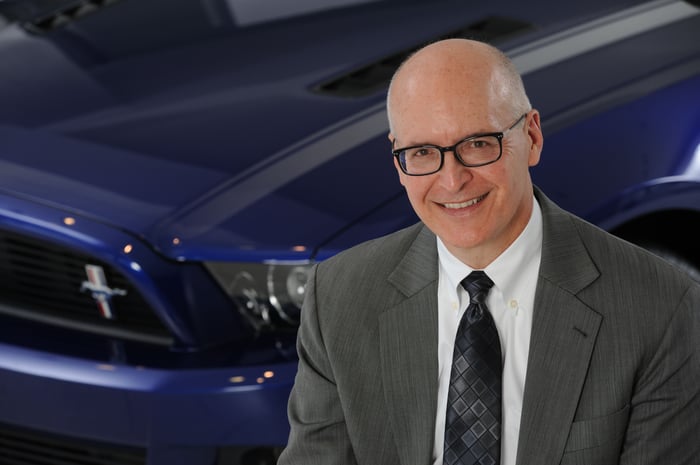 Needless to say, that put a big dent in its 2016 net income. But as Ford CFO Bob Shanks explained to me in an interview last week, the impact of Ford's 2017 remeasurement was much less dramatic -- and it was more than offset by another pension-related gain.

I think the number was $162 [million] actually, in terms of the remeasurement. But also, incremental to that, we made a change to our general retirement plan for salaried employees in the U.S., and that also generated a pension curtailment of a positive $350 million or so. So you have to look at those two together as a positive versus that negative $3 billion impact last year.

That was obviously a big piece of Ford's year-over-year improvement in net income. But there was more to the story, and it involves Ford's tax payments.

How Ford gave itself a tax break in 2017

Ford also got some big breaks on taxes in 2017. Earlier in the year, in anticipation of likely changes to the U.S. tax laws, Ford's tax office began working to identify tax credits it could take during 2017, largely related to past losses in Ford's overseas business units. Those tax credits weren't small potatoes: $421 million in the second quarter, and another $266 million in the third.

Ford got more help from the new Tax Reform Act once it was passed. The net of the changes related to the Tax Reform Act boosted Ford's 2017 bottom line by about $400 million, Shanks said.

By the way, those tax breaks may seem like one-time flukes, but -- at least for the time being -- the lower rate is the new normal for Ford's taxes. Ford's 2018 guidance predicts an adjusted effective tax rate of "about 15%" this year.

The upshot: A $5 billion swing in favor of Ford's bottom line

To sum up: Ford got a little over $3 billion in year-over-year improvement from its pension remeasurement and other pension-related changes. Those were a huge hit in 2016, but a small benefit this time around.

Meanwhile, Ford's estimated income taxes were about $2 billion less in 2017 versus 2016, thanks in part to the new tax law -- and in part to some smart work done by Ford's tax folks before the law went into effect.

Of course, there are a lot of moving parts in Ford's finances, and other factors had an impact on the year-over-year improvement in Ford's after-tax profit. But as we've seen, the pension and tax changes account for much of the story.

For shareholders, that's both good and worrisome: More net income is good, of course, but that pre-tax profit decline is still a concern.