Shares of the land drilling and oil services company sold off hard after it missed expectations for the fourth quarter.

To say that Wall Street wasn't satisfied with Patterson-UTI Energy's (PTEN -4.00%) most recent quarterly report would be a bit of an understatement: The stock dropped more than 14% after the earnings release. While the company's earnings are showing some signs of improvement and there's a lot of excitement around shale drilling again, its progress back toward profitability seems agonizingly slow.

Let's take a look at Patterson's latest results to see why earnings have been held back for so long, and consider what signs that are that matters might change for the better in 2018. 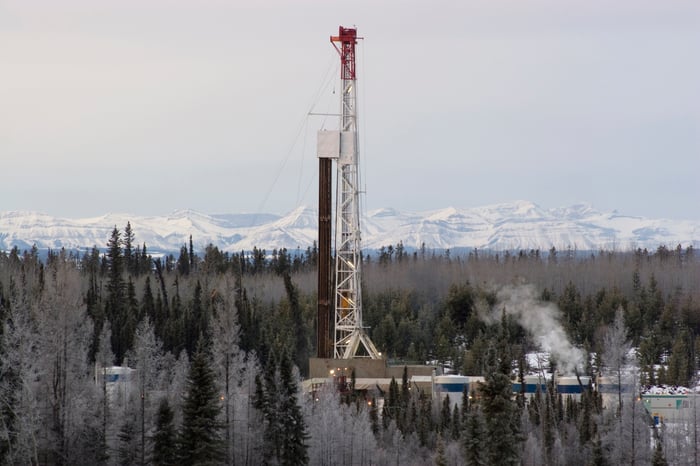 Before getting too excited about those high net income and EPS numbers, keep in mind that they are wholly attributable to recent corporate tax cuts. Patterson realized a one-time $218 million benefit from the revaluation of its deferred tax liabilities. Factoring out one-time items, Patterson took a $0.10 per share loss.

So here is the good part of Patterson's most recent results: The company is getting back to work. All of its operating segments reported significant upticks in revenue year over year. Leading the way was its pressure pumping business, which reported a 285% revenue increase to $406 million. This particular part of the oil services industry has done well because there's a tight supply of fracking equipment and crews. Halliburton's (HAL 0.22%) management noted during their conference call that pressure pumping has been a driving force for that company's revenue and earnings growth in recent quarters.

What's a little concerning is that this rapid rise in revenue has yet to translate into operating earnings, especially for its contract drilling segment. One thing management noted, though, was that the company's expenses are running high as it upgrades some of its rigs to what in the industry calls super spec rigs. These have more horsepower and the ability to quickly move from well to well on a drilling pad. Patterson isn't the only company having this issue; its largest competitor, Helmerich & Payne (HP 1.04%), has similarly struggled with profitability because of these upgrade costs.

Also, this past quarter, Patterson-UTI completed its previously announced acquisition of directional drilling company MS Energy Services. Patterson reported that as a new business segment for the quarter. In Patterson's press release, Chairman Mark Siegel recapped some of the accomplishments for the prior year:

Looking back on 2017, it was a transformational year for Patterson-UTI. We both strengthened and diversified our company through strategic acquisitions that improved our scale in drilling and pressure pumping and added new services in directional drilling, oilfield rentals, and drilling technology. Patterson-UTI is the only company in the U.S. unconventional market with significant scale in drilling, pressure pumping, and directional drilling.

Also, in the same release, CEO Andy Hendricks gave a broad outlook for 2018.

For 2018 we have several initiatives under way by which to benefit from the expected strength in the pressure pumping market. These initiatives include optimizing our average spread size to gain an extra active spread from already active equipment, relocating a couple spreads out of the Mid-Continent to more profitable markets, and reactivating additional idle frac spreads. 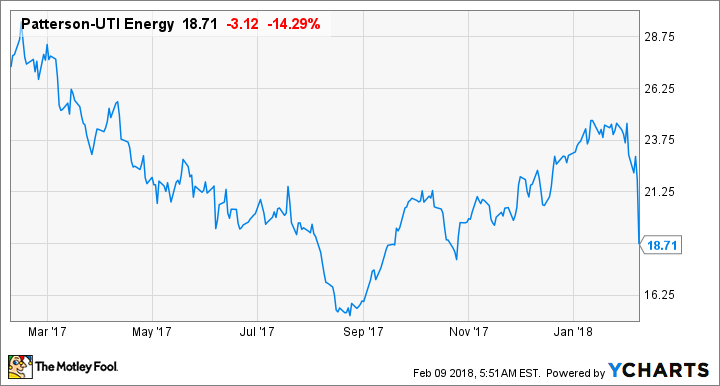 Taking the pulse of land drilling and oil services companies like Patterson isn't easy right now. On the one hand, demand for drilling is on the rise, which should provide higher revenue. Conversely, the producers that are spending more on drilling want super spec rigs that can do the most challenging jobs, and the high costs of upgrading or building new rigs to these specifications is preventing Patterson-UTI and others from turning a profit.

Someone with a more optimistic view might say that once Patterson completes its fleet upgrades, costs will go down and profits should rise. Considering the pace of technological development in the oil patch, though, it's hard to say when that will be. Patterson may be one of the better-positioned companies because it has a more diversified revenue stream and a profitable pressure pumping business right now, but it could still be some time before it gets back to showing positive numbers on the bottom line.