Please ensure Javascript is enabled for purposes of website accessibility
Log In Help Join The Motley Fool
Free Article Join Over 1 Million Premium Members And Get More In-Depth Stock Guidance and Research
By Brian Stoffel - Updated Feb 14, 2018 at 8:54AM

Here's why shareholders will continue playing a waiting game for profitability.

While many investors have shied away from investing in the educational industry -- and for good reason -- Instructure (INST) has been a breath of fresh air. Instead of offering up diplomas, the company provides a software-as-a-service (SaaS) platform to make the sharing of educational materials, feedback, and student data easier and more efficient.

After a stellar start to the school year, the company reported fourth-quarter earnings this week, and the report showed continued strong growth in sales. For those hoping for a quicker path to profits, however, there might be some hand-wringing. Continued investment in the company's platform and winning over customers will remain the focus in the year ahead. 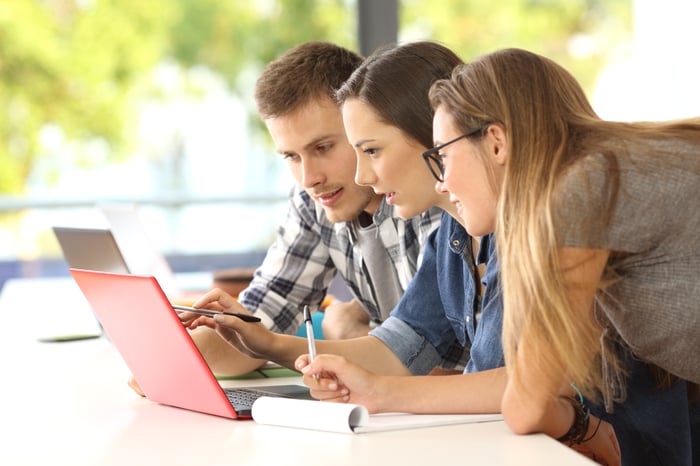 Before we dive into the weeds, let's look at the company's performance on the headline numbers.

Diving into the company's income statement, we find a few very positive trends. Management stated that revenue came in ahead of expectations for three big reasons: Revenue retention came in ahead of 100%, there were more early starts to contracts than management expected, and non-recurring revenue was higher than expected -- which is probably the result of earlier-than-expected starts.

There have also been noticeable improvements in leverage. While revenue grew 39%, sales and marketing and general and administrative costs grew just 18% and 16%, respectively. Research and development costs, on the other hand, continued to grow briskly -- up 33%.

That, however, is a crucial area for investment as it helps ensure that the company can keep up with competition over time. On the other hand, investors should take comfort in knowing that expenses didn't increase as rapidly here as revenue did.

On the other hand, gross margins contracted slightly -- by 141 basis points -- as stock-based compensation and the company's continued investment in the subscription platforms took a toll.

There were a number of announcements when it came to Instructure's three big products: Canvas, for schools; Bridge, for businesses; and Arc, a video platform.

The company also announced the relatively major acquisition of Practice, which is a "video microlearning solution." Basically, the acquisition will fit into the Bridge suite of products, with Learn being the tool to train employees, Perform being an evaluative tool, and Practice functioning as a relearning tool.

Management was not shy about the company's prospects. On the Canvas (K-12 and higher education) side, CEO Josh Coates said that Instructure's market share is in the mid-20% range, with competitor Blackboard in the mid-30% range. He said that he sees them crossing paths -- with Instructure taking the lead -- within one to two years.

That being said, the two major growth drivers will come from international K-12 and higher education clients, as well as institutional customers for the Bridge platform.

Management sees revenue growing to a midpoint of $206.5 million in the year ahead, which would represent 30% growth. For the first quarter, revenue is expected to come in at a midpoint of $47.1 million, representing 39% growth.

In all, the important metrics are moving toward an eventual shift to profitability. And as long as Instructure continues to keep revenue retention above 100% -- signifying a wide moat via high switching costs -- investors should have patience with management laying the groundwork for long-term dominance within the niche.

Editor's note: This article has been corrected to note that gross margin contracted in the quarter.