Ford Motor Company (F -2.35%) said that its sales in China fell 18% in January, a difficult start to a year in which Ford hopes to reposition its sagging business in the world's largest new-car market. 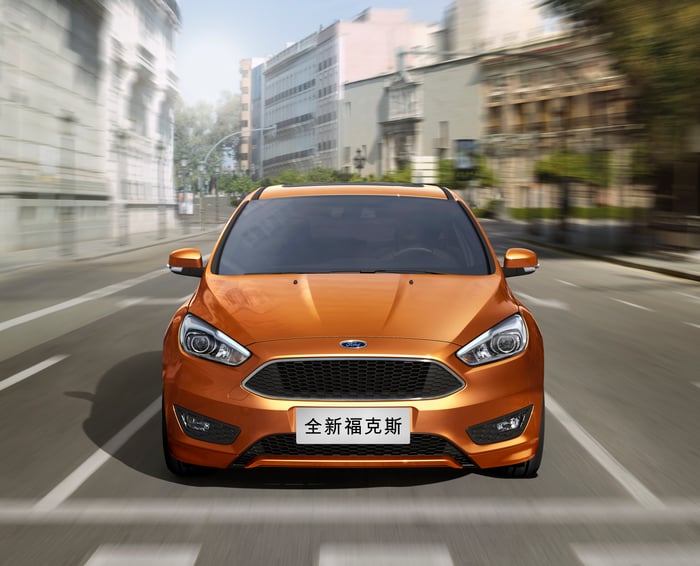 Not long ago, Ford's Focus was one of China's best-selling cars. Things have changed: Focus sales were down 44% in January. Image source: Ford Motor Company.

Ford's 18% year-over-year decline happened in a month when it should have had an easy comparison: In 2017, the Chinese New Year holiday fell in January. Typically, Chinese businesses close for several days around the holiday; few cars are sold during that period.

But this year, the holiday falls on Feb. 16. For most of the global automakers with major operations in China, that meant an easy year-over-year sales gain in January as the overall market rose 11%.

Ford's commercial-vehicle joint venture, Jiangling Motors (JMC), fared better with a 13% increase to 22,794 units sold, and the Lincoln luxury brand's sales rose 7% to 5,008, but those gains were too little to make up for the steep decline in sales of Ford-brand vehicles.

It has been clear for a while that Ford's product-replacement cycle hasn't been keeping up with the fast-moving Chinese market. Ford mainstays like the Focus compact sedan and Edge SUV did very well in the first couple of years after they were introduced, but sales have fallen off quickly. The problem: With so many automakers doing business in China, Ford's products have become "old news" faster than expected.

One factor in Ford's stumble has been a dearth of senior executives with deep China expertise. Ford began addressing that by hiring a Chinese-speaking American executive, Jason Luo, to run its China operation last August. Luo went to work quickly: He and Ford CEO Jim Hackett announced a China turnaround plan in December that included a series of sensible changes, including more local production and an expanded range of Ford-brand SUVs for China.

Jason offered his resignation for personal reasons that predate his time at Ford. Ford accepted Jason's resignation as the right way for him and the Company to proceed. Jason's decision was not related to the business strategy or performance of Ford China, which remains robust, with a bright future ahead. We continue to act in the best interest of our company, employees, and stakeholders.

For the moment, Fleet is running Ford China while the company decides on Luo's replacement. But it's hard to escape the sense that Ford's operation in China, which looked so successful just a couple of years ago, has fallen into disarray.