Hint: Look lower down on the income statement.

Spotify issued guidance for the first quarter and full year a week ahead of its public listing. The news release included some headline-grabbing numbers like the expectation for 198 million to 208 million total listeners by the end of the year, with as many as 96 million of those paying for a subscription. The music-streaming leader also expects to generate between 4.9 billion euros and 5.3 billion euros in revenue for the year, pressured by a strengthening euro versus the U.S. dollar.

So how is management improving margin so quickly? 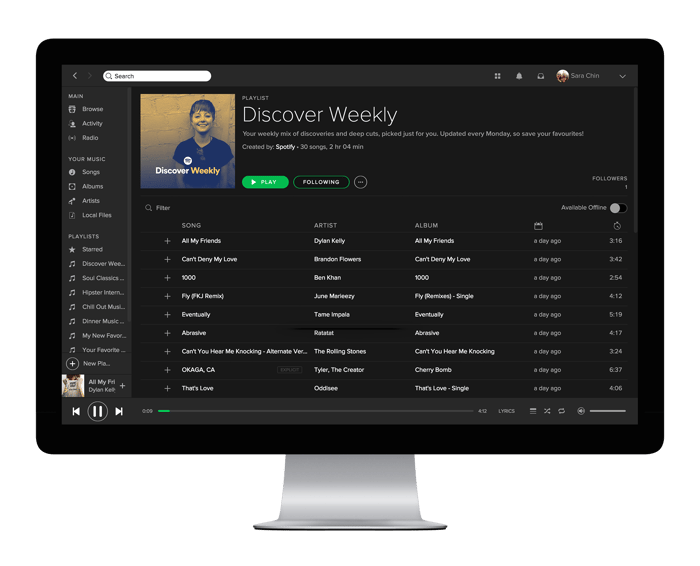 New deals with the labels

Spotify reupped its licensing deals with Sony, Warner, Universal, and Merlin between April and August of last year. Spotify used its huge listener base as leverage, but also gave some concessions to the labels, such as windowing certain releases. That means some songs are now only available to paid subscribers for a limited time before free listeners can stream the songs as well.

Competing pay-only services like Apple's (AAPL -1.96%) Apple Music have negotiated exclusive release deals with labels in the past. Part of the draw of those deals for labels is they required a subscription, while Spotify doesn't. With the increased competition, Spotify is forced to make the concession to labels or potentially lose subscribers to Apple and others.

Overall, it seems Spotify received a significant reduction in its royalty fees. That's evident in the jump in gross margin from 16% to 22% for premium subscribers last year. The jump in ad-supported gross margin improved from negative 12% to a positive 10%, further reflecting the likelihood that labels conceded with royalties on the ad-supported group in favor of windowing content for paid subscribers.

Spotify will have the benefit of a full year of these new deals in 2018, which should provide a nice boost to gross margin.

Spotify has been growing ad revenue per user by boosting the number of ads users see and listen to and increasing average price through a jump in video ads, which now account for 29% of total ad revenue. Spotify has aggressively pushed video ads on mobile, which brings in much more revenue than audio ads. Programmatic advertising accounted for just under half of total revenue at the end of last year, so there's still room for Spotify to increase ad sales without adding too much in terms of operating costs. 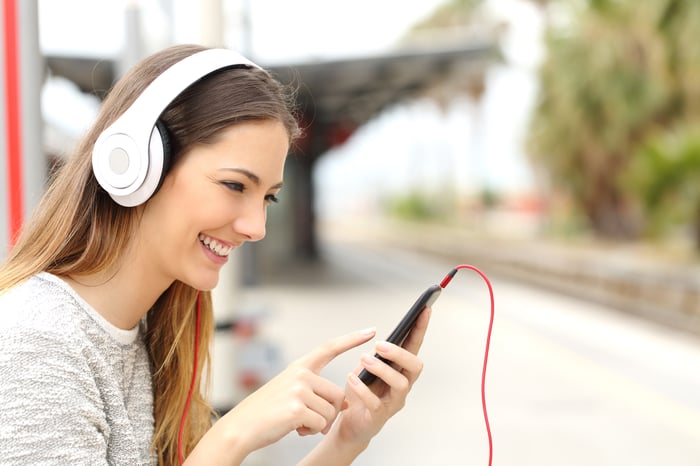 Spotify began streaming podcasts and video in 2015, but it's only put a real focus on it in the last few months. The company is working with big-name podcast companies to promote its podcast functionality and started including a podcast tab prominently within the app.

Apple currently dominates the podcast industry, accounting for about 55% of listening through iTunes and its Podcast app. That share is falling, however, as listeners explore other options for discovering and listening to podcasts.

Podcasts are a growing medium, but don't present a way for Spotify to monetize listening directly. Podcast producers will offer the content for free, however, since they often make money from advertisers or donations, and they're looking to reach as many listeners as possible. That means Spotify could increase engagement on its platform, but without having to increase its royalty payments.

In January, Spotify launched a program called Spotlight, which takes podcasts and adds visual elements like photos and videos. This offers a unique advertising opportunity for Spotify, especially since visual elements mean users are looking at their screen. It's still very early days for Spotlight, but if Spotify brings on more content partners that want to produce that kind of content, it should help increase revenue per customer or convert more paid subscribers.

As Spotify's listener base gets bigger, it should be able to expand its gross margin through improved power in negotiations with record labels. At the same time, investors should expect Spotify to explore options to grow revenue through higher-margin content like podcasts and video or through cutting out the middleman and enabling creators to access listeners directly.