In one corner stands AT&T (NYSE:T), the $210 billion telecommunications behemoth. In the other stands hard-charging challenger T-Mobile (NASDAQ:TMUS).

With AT&T, we have an industry stalwart with 34 straight years of dividend increases. With T-Mobile, we have a rising star with 15 consecutive quarters of industry-leading revenue growth.

It's an intriguing matchup. Read on to see who will be crowned champ of this telecom showdown. 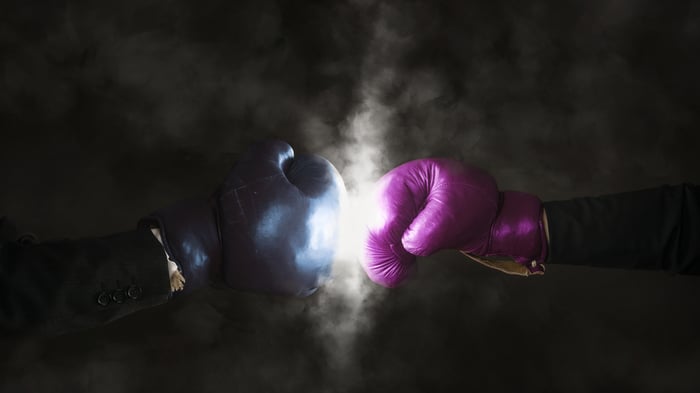 Though it's primarily known for its wireless phone services, AT&T is also the largest pay TV provider in the United States. This gives it the ability to bundle its services. Thanks to its $49 billion acquisition of DIRECTV in 2015, AT&T can offer its customers a service package that includes wireless, home phone, internet, and satellite TV. And with its new DIRECTV Now offering, AT&T has also added a streaming video option to the mix.

T-Mobile, on the other hand, focuses almost exclusively on its wireless offering. Its competitive strategy is centered on its "Un-carrier" initiatives, which entail moves such as including taxes and fees in its pricing, excluding video streaming from data caps, and even throwing in a free Netflix subscription with its family plans.

Moreover, T-Mobile is investing heavily to strengthen its wireless network. Its efforts are already bearing fruit: Recent studies suggest that T-Mobile's wireless network quality may now be best-in-class. This, combined with the popularity of its Un-carrier promotions, is helping T-Mobile gain subscribers at rapid clip, often at the expense of AT&T. With T-Mobile steadily gaining share from its larger rival, I'd argue that it's now in the stronger competitive position.

Let's now take a look at how AT&T and T-Mobile compare in regards to financial strength.

AT&T's operating profits and cash flow dwarf those of T-Mobile. It also generated more than $17 billion in free cash flow over the past year, while T-Mobile's capital spending continues to outpace its cash production. And while most of it is earmarked for its pending acquisition of Time Warner, AT&T currently has more than $50 billion in cash in its coffers, compared to only about $1.2 billion for T-Mobile. Thus, AT&T currently has a clear edge in terms of financial fortitude.

No "better buy" discussion should take place without a look at valuation. So let's check out some key metrics for these telecom rivals.

AT&T appears to be the better bargain until you look at the price-to-earnings-to-growth (PEG) ratio, which in my opinion is the most important out of these three metrics. The sizable variance in AT&T's and T-Mobile's PEG ratios is due to the fact that Wall Street is expecting T-Mobile to grow its earnings at an annualized rate of more than 28% over the next five years, compared to about 9%  annually for AT&T. That's why, even though it has a significantly higher P/E ratio, T-Mobile's stock is 40% less expensive on a PEG basis. As such, I'd argue that it's the better bargain.