Those two jobs are held by one person: Joy Falotico. Falotico, who had ably led the company's captive-financing arm, Ford Credit, replaced rising star Kumar Galhotra in the combined role.

Galhotra is an impressive executive and a tough act to follow, but Falotico seems up to the challenge and clearly relishes her new role. I spoke with her earlier this week, shortly after her team presented the all-new Lincoln Aviator to a group of journalists.

Remarks have been lightly edited for length and clarity. 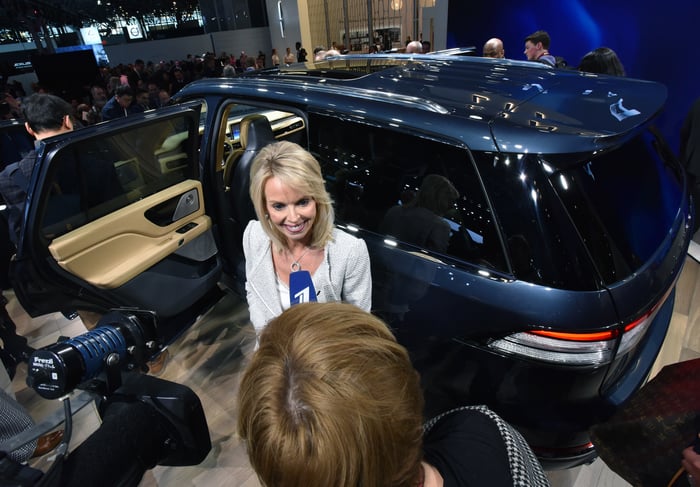 On the next steps in Lincoln's revival

John Rosevear: You came into Lincoln from a very different role at Ford. From your perspective right now, after a few weeks in charge, what does Lincoln need next?

Joy Falotico: I'm new to the role, but I'm certainly not new to Lincoln because I've been around [Ford] so long. [Falotico has worked at Ford since 1989.] I'm looking forward to continuing the transformation, building on the momentum that we currently already have. I'm very excited with what we've seen with the Navigator. Now we've got the new Aviator to talk about, we've got the Nautilus coming out later this year, we've got the freshened MKC, so we have lots of things to look forward to there. And we're also continuing to evolve the client experiences.

Rosevear: I've heard [from other Ford executives] about the extremely high level of personal service offered at Lincoln dealerships in China. How are you approaching the challenge of bringing U.S. dealers up to a similar level of service?

Falotico: The process we have with the Lincoln dealers in China is called The Lincoln Way. We've established a network where we train them all right from the very beginning on that process, and it has been really successful.

We're bringing it now to the U.S., and we're co-creating it with the dealers here, focusing on the experiences for the customers. It's about bringing the dealers along to co-create and build on that process.

The click-to-purchase pilot, that we're expanding this year, is another great example of that. We're moving the buying process online, but the dealers still have a key role in the transaction.

So we're talking a lot with our dealer body, and talking about how we want to transact differently in the future, to ensure that we're giving back to our customers the most valuable thing, which is their time, and really pairing our great products with a great personal experience. We're really pleased with the response we're getting from the dealer body on that journey.

Rosevear: What are the dealers asking for right now?

Falotico: A lot of them are keen to see the new product coming this year, as you can imagine! They're very excited about the refreshed MKC, as I mentioned, and the Nautilus -- and we just at [the NADA dealer conference] this past week showed a quick clip of this new vehicle here [the Aviator]. Of course, we asked them to keep it under their hats, and they did. But they were super-excited about the new Aviator, so as you can imagine they're keen to see what else is going to be next. They're very pleased with the products.

Telling the story of Ford's transformation

Rosevear: Your other new hat is that you're now Ford's chief marketing officer. From a very big-picture level, how are you thinking about Ford's ongoing transformation from a story-telling perspective?

An example of that is the Lincoln Co-Pilot360 that we just launched with the Lincoln Aviator, and there's also Ford Co-Pilot360 as well. That bundles all of our driver-assist technology and adds new technology to that, but it puts it in a way that a customer can understand, and then we can story-tell around it, as you mentioned. So that's an example of what we're working on.

There are several other things coming with all the new Ford products that you may have heard about recently that will drive some story-telling. Another area that we talked about in that Ford Uncovered briefing is electrification across the lineup. Again, that's another opportunity to talk about story-telling around electrification -- the fact that it can boost performance, and of course it's a fuel-economy play as well. So lots of good things coming there.

Rosevear: Related to things that are coming from Ford, and maybe now moving back to Lincoln a bit: The move more toward utilities. Do you see Lincoln moving completely away from sedans?

Falotico: No. Actually, our Lincoln Continental and MKZ [were introduced for the] 2017 model year. So they're a very, very important part of our lineup. We are leaning into utilities with the Aviator and the Nautilus, and we'll be looking forward to what else we need in our lineup, because of the growth we see in [the SUV] segments.

We're going to build the cars in the silhouettes that our customers want. We're going to stay close to the consumer insights. We do see growth in those segments, so we want to make sure that we're present there. But we're still going to stay focused on what is the right silhouette for our customer base as we continue to differentiate Lincoln from other brands.

One more thing: The suicide doors

I couldn't resist asking Falotico one more question. Last week, after that dealer conference that she mentioned, Automotive News reported something that Ford probably wished it hadn't. The News said that Ford had shown Lincoln dealers a photo of an upcoming all-new Lincoln Continental with so-called "suicide doors." 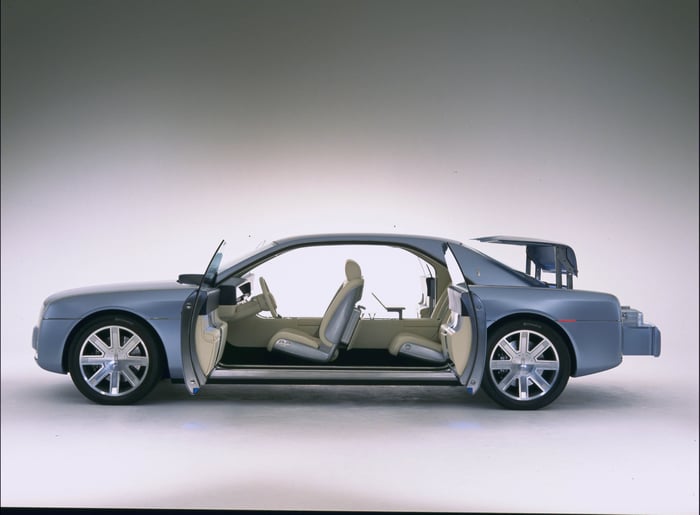 The Lincoln Continental Concept, a show car from 2002, had so-called "suicide doors," rear-seat doors hinged at the back. Image source: Ford Motor Company.

"Suicide doors" sounds scary and dangerous, but it's just an old term for back-seat doors that are hinged at the rear, rather than at the front. Suicide doors were a distinguishing feature of the iconic Lincoln Continentals of the early 1960s. Lincoln had reprised them on a concept car in 2002, but the current Continental doesn't have them.

I know from long experience that Ford executives almost never reveal details about future products to journalists on (or off) the record. But I had to ask.

Lincoln fans, take note: She didn't deny the report, and that says volumes.