Shares of the online dating leader rose on momentum from its fourth-quarter earnings report and an analyst raising his price target.

Reports of a legal tussle with rival Bumble dominated news about Match Group for much of the month, but momentum in the beginning weeks was enough to notch a double-digit gain. 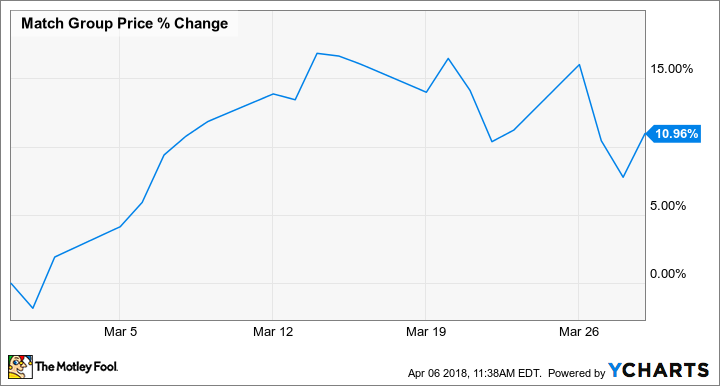 Match Group shares got a boost from Jefferies on March 7, gaining 3.4% after analyst Brent Thill raised his price target from $44 to $50. He said the stock still trades at a discount to other subscription-based internet companies, and a new paid Tinder feature should also help drive profits.

That helped build on momentum from its fourth-quarter earnings report, as Match Group reported another strong round of subscriber growth at Tinder, its most valuable property.

Match Group had reportedly been interested in acquiring Bumble and some see the lawsuit as an attempt to strong-arm Bumble into a deal. Towards the end of the month, Bumble responded by suing Match Group for stealing trade secrets.

Bumble's countersuit seems to indicate that both parties are unlikely to reach a deal. In a blog post and open letter to Match Group, Bumble said:

Leaving aside the legal turmoil, Match Group continues to look poised for growth as it monetizes Tinder and the subscriber base continues to grow. I'd expect the online dating specialist to continue to outperform.