Economic tailwinds are driving growth at the leading staffing company.

The first-quarter earnings report from leading staffing company Robert Half International (RHI 0.31%) left little doubt that the economy is picking up. Just as management predicted on the previous earnings call, hiring conditions improved in the U.S., and the company reported strong revenue and profit growth. Let's take a closer look at the earnings report. 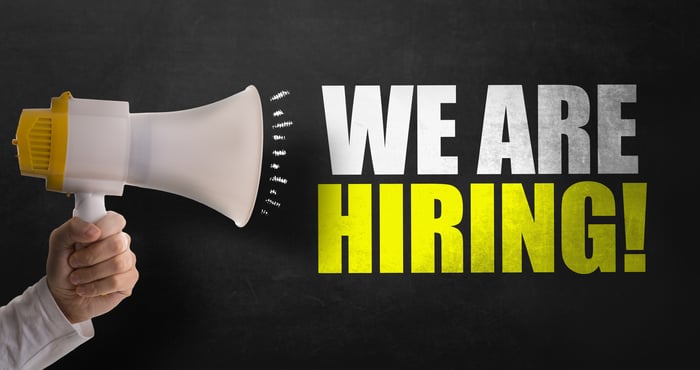 Moreover, Robert Half's earnings trends appear to have improved throughout the quarter -- suggesting that growth will accelerate in the second quarter. You can see this in the monthly trends data given on the earnings call. As shown below, growth in the last month of the quarter, March, was stronger than the quarter as a whole. In addition, growth in temporary and permanent hiring revenue is stronger so far in April than it was in March and the first quarter.

The positive outlook is reflected in the guidance for the second quarter:

In fact, the second-quarter revenue guidance looks a bit conservative compared to how the company exited the quarter. JPMorgan analyst Andrew Steinerman picked up on this point during the earnings call, and CEO Max Messmer responded to his question by saying: "[To] the extent the April start plays out over the course of the quarter, that would certainly be upside relative to our guidance. We hope it's conservative..."

If there is a disappointment from the quarter, it comes from the margin performance. It's an issue that surfaced in the third quarter of 2017. A look at the details from the first quarter shows that gross margin barely improved and operating margin actually declined.

The main culprits were Robert Half's temporary and consulting staffing operations -- where "higher temp-to-hire conversion fees" only partly "offset higher fringe benefit costs" -- and Protiviti (risk consulting and internal audit services). However, CFO Keith Waddell said that "Protiviti tends to do a little better sequentially in the second quarter than the first from a margin standpoint," and he expects margin expansion in the second quarter.

Focusing on growth from a regional perspective, it's clear that a return to growth in U.S. temporary and consultant staffing is now firmly in place. As discussed on the earnings call, temporary staffing tends to follow permanent staffing, as the economic recovery tends to result in a sharp bounce in jobs lost during the slowdown. As you can see below, employment growth is picking up in line with management's expectations one quarter ago. 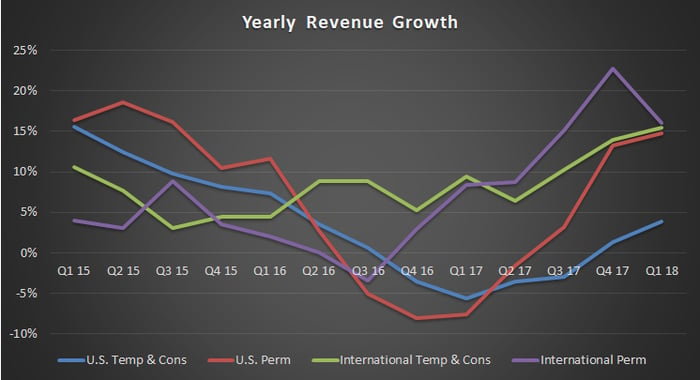 Where next for Robert Half?

Ongoing economic growth will obviously be good news for staffing companies, and the trend is in Robert Half's favor. Investors will be hoping for some expansion in operating income margin in the second quarter, alongside high-single-digit revenue growth.