Please ensure Javascript is enabled for purposes of website accessibility
Log In Help Join The Motley Fool
Free Article Join Over 1 Million Premium Members And Get More In-Depth Stock Guidance and Research
By Rich Smith - May 3, 2018 at 8:18AM

Bookings strength promises future sales growth, but will it be enough to offset falling margins?

What a week it was for Raytheon (RTN) investors!

Entering last week at a high of more than $228 a share, Raytheon exited below $204 per share, after reporting Q1 2018 earnings on Thursday -- an 11% loss in market capitalization for the week. And yet, was the news really so bad? 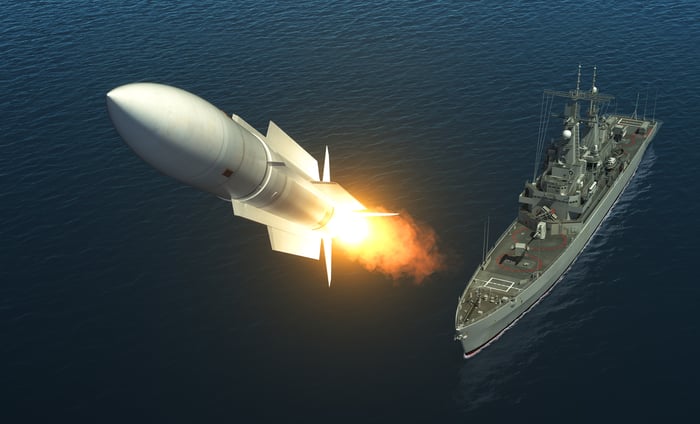 Raytheon also raised its guidance for the rest of this year, topping off its revenue guidance with an extra $100 million in expected sales (now $26.5 billion to $27 billion), predicting a lower tax rate, and consequently raising guidance for earnings by a good $0.15 (now $9.70 to $9.90 per share). Sales could improve even more in future quarters, too, as Raytheon noted that its bookings of new orders grew 11% year over year in Q1, or more than twice as fast as its recorded sales growth.

So what went wrong? Why are investors suddenly so sour on Raytheon stock?

Now the bad news: Margin was flat at the larger intelligence, information and services division -- a lowly 7.4%. Margin compressed at the much larger missile systems division, falling 80 basis points to 11.5%. And Forcepoint -- Raytheon's ill-fated venture into cybersecurity -- lost money in the quarter, scoring a negative profit margin. (And don't say you weren't warned.)

So what's the upshot for investors? Raytheon had a great Q1. Bookings grew faster than sales last quarter, and profits grew much faster than sales. What's more, analysts are projecting pretty strong growth rates in future years as well, with Raytheon pegged for better-than-14% long-term growth over the next half decade.

Problem is, with a stock price that's still nearly 30 times trailing earnings, earnings may have to grow even faster than that in order to justify Raytheon's sky-high stock price. Meanwhile, margins in the defense industry -- as I've warned many times before -- are at or near record-high levels across the board. This means that Raytheon may have to lean heavily on sales growth to keep its earnings growing at a rate sufficient to support Raytheon stock's high valuation.

Last quarter's surge in bookings suggests such a scenario is not totally out of the question. The question is whether sales growth will be sufficient to keep earnings growing in a time of eroding margins.

Investors appear to be having second thoughts as to how likely that is.