Please ensure Javascript is enabled for purposes of website accessibility
Log In Help Join The Motley Fool
Free Article Join Over 1 Million Premium Members And Get More In-Depth Stock Guidance and Research
By Keith Speights – Updated May 4, 2018 at 2:56PM

Just wake me up when things settle down. I won't lose any sleep over these three high-growth stocks.

We could be in for a bumpy ride.

Like most travelers, I always hate hearing those words when I'm on an airplane. Thankfully, I'm not sitting on a jet about to hit turbulence right now. But I am invested heavily in the stock market. And not only might we be in for a bumpy ride ahead, it's already been turbulent so far in 2018.

However, I think the response passengers take on an airplane that's about to encounter a rough patch is the right approach for investors: Fasten your seat belts, sit back, and wait. That's exactly what I plan to do, especially with three of my favorite growth stocks -- Align Technology (ALGN -2.47%), Alphabet (GOOG -0.73%) (GOOGL -0.68%), and NVIDIA (NVDA 1.51%). Here's why I'm holding onto these stocks no matter how bumpy the market gets. 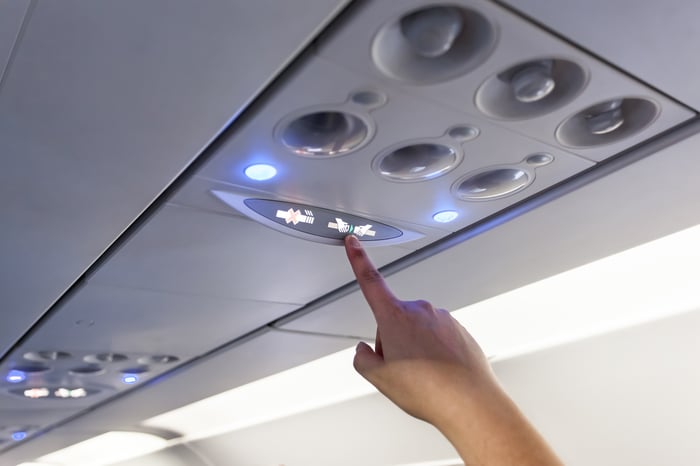 Align Technology ranked as the top-performing stock in the S&P 500 in 2017. And Align didn't join the S&P 500 until nearly halfway through the year. However, Align stock hasn't been immune to overall market gyrations so far in 2018. The orthodontic-device maker especially took a hit after a Wall Street analyst predicted that its growth would slow.

I don't think Align is any trouble, though. The company reported stellar results in its first-quarter update last week, with year-over-year sales growth of more than 40% and adjusted earnings growth of close to 38%. Align's Invisalign clear dental aligners and iTero intra-oral scanners continue to enjoy impressive momentum.

My view is that Align's long-term growth prospects are as solid as ever. The company currently claims only 11% of the total addressable market in orthodontic aligners and even less -- 4.5% -- of the teen market. I expect Align to continue increasing its share of this market through advertising directly to consumers and adding new dental professionals to its network.

The company is also developing new Invisalign versions capable of addressing more complicated cases of malocclusion (misalignment of teeth). Align thinks these innovations hold the potential to expand the total addressable market by more than 40% over the next few years.

Alphabet stock has racked up year-to-date gains of roughly 10% twice so far in 2018, only to give up all of those gains and then some. It's now down a bit year-to-date. Has this roller-coaster ride stemmed from dismal financial results or losing market share to rivals? Nope.

Actually, Alphabet's 2017 Q4 results announced in February and its 2018 Q1 results announced in April were strong. Alphabet might be a giant company, but it's a nimble giant. Sales and profits continue to soar, driven primarily by advertising revenue from the ever-dominant Google search engine, Gmail, Google Maps, Google Play, and YouTube.

What I especially like about Alphabet, though, are its multiple pathways for future growth. The company's Nest smart-home technology business is booming. I see Nest as a major source fueling Alphabet's growth for years to come. Google's partnerships with retailers to take a percentage of sales in exchange for listings and links to loyalty programs is another big opportunity for Alphabet.

Most of all, I think Alphabet has huge growth potential in harnessing artificial intelligence (AI), especially in self-driving cars. The company's Waymo unit currently stands as the leader in self-driving car technology. This fledgling market could eventually be a major source of revenue for Alphabet.

NVIDIA reminds me of both Align Technology and Alphabet in some ways. Just as an analyst questioned Align's sustained growth rates, another Wall Street analyst thinks NVIDIA's growth will fizzle, with the stock losing over 50% of its value. Count me as skeptical about that skepticism.

But also like Alphabet, AI appears to be the biggest opportunity for NVIDIA. The company recently introduced five new products that further establish it as the one to beat in AI. These products included two supercomputers, one for the fast-growing data-center market, and another for medical imaging in healthcare. NVIDIA expanded its self-driving car technology offerings with a cloud-based system for testing autonomous vehicles using photorealistic simulation, or virtual reality (VR).

It's possible that other chipmakers could catch up with NVIDIA. However, I think the company is moving so quickly at developing new products and building a strong AI ecosystem that it can keep its momentum going for a long time to come.

Get on the right plane

My response to the stock market's bumpy ride is to...do nothing. I'm going to hold onto Align Technology, Alphabet, and NVIDIA because I believe in the long-term prospects for these companies. I wouldn't have bought them in the first place if I didn't think they would perform well over the long run. Market fluctuations aren't going to change my mind.

The key here is that I thought about this before buying the stocks. To go back to the airplane analogy used earlier, there's no need for a parachute when you get on the right plane.