Please ensure Javascript is enabled for purposes of website accessibility
Log In Help Join The Motley Fool
Free Article Join Over 1 Million Premium Members And Get More In-Depth Stock Guidance and Research
By Jason Hall, Tyler Crowe, and John Bromels - May 15, 2018 at 8:32PM

One of big oil's biggest, a niche U.S. supplier, and a leader in global renewables make the cut this month.

The old adage "sell in May and go away" has probably caused a lot of investors to miss out on some promising stocks, and that's likely to be the case again this year. Instead of selling, May might just be an excellent time to buy -- especially for long-term investors looking for timely opportunities to add great companies to their portfolios. 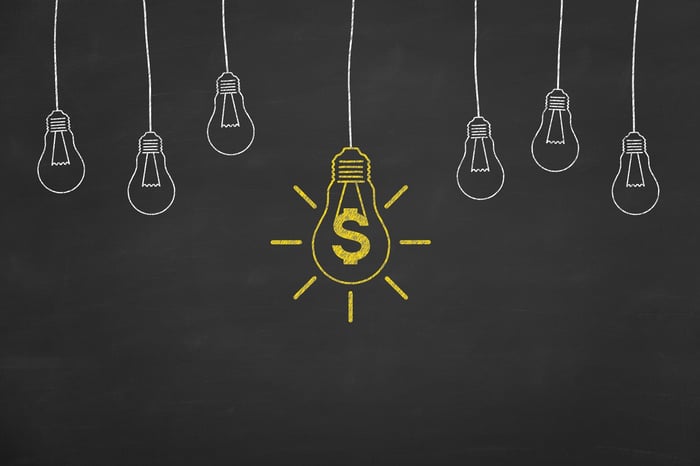 John Bromels (Royal Dutch Shell): Not only will Shell's stellar dividend yield -- currently about 5.4% -- start putting money in your pocket right away, but the moves management is making to prepare for the future mean it should still be paying off for investors in five, 10, or even 20 years down the road.

One reason Shell is doing so well right now is, of course, high oil prices. With Brent crude prices above $60/barrel for more than six months -- and closing in on $80/barrel today -- the whole industry is benefiting. But thanks to strict cost-cutting measures that Shell implemented during the oil price downturn, it's benefiting more than most. Look no further than the company's most recent quarter, Q1 2018, for proof: Net income was up 66.7% year over year to $5.9 billion, plus the company is paying off short-term debt and raking in cash.

But suppose oil prices come back down...what then? Well, Shell CEO Ben Van Beurden has been thinking the same thing. That's why he's moved aggressively to expand Shell's liquefied natural gas business, a market he -- and many an analyst -- expects will grow even faster than oil in coming years. That should help keep the company afloat even if the oil market softens.

Shell expects to start a share repurchase program soon, and smart investors will want to be on board before then. May is the perfect time to buy this industry powerhouse.

Strong market for sand, with some diversity just in case

Tyler Crowe (U.S. Silica Holdings): Prior to the oil price crash from 2014 to 2016, companies that supplied hydraulic fracturing sand were some of the hottest stocks in the market. The euphoria around the U.S. growing its production for the first time in over 30 years and the idea of energy independence made many people forget that oil and gas -- and everything associated with it -- is a commodity. Frack sand producers were probably hit the hardest because most of them were building out capacity and taking on quite a bit of debt to do it. So when demand dried up, they were caught with their pants down, and stock prices reacted accordingly.

Even though oil prices have recovered significantly since then, and demand for frack sand is at an all-time high, Wall Street has not been kind to sand suppliers. Even the largest, most financially secure sand supplier in the nation -- U.S. Silica -- trades for a very reasonable enterprise value to EBITDA ratio of 8.2 times.

I can sympathize with the idea that another oil price crash would send shares of U.S. Silica right back down again, and it's not an unreasonable assumption because, well, commodity prices are going to do their thing and ruin your investment thesis. The thing that gives me a little bit more confidence about U.S. Silica's prospects is the fact that it just made a significant acquisition that will help diversify the company away from being a pure frack sand supplier. With a robust sand market in place that looks to have legs and a more diverse revenue stream, U.S. Silica looks pretty attractive right now.

Still on sale with a strong tailwind

Jason Hall (Vestas Wind Systems): I offered up Vestas as a top energy stock to buy back in March. Fast-forward to today, and the stock is actually a little cheaper while the thesis is unchanged.

Vestas reported first-quarter earnings in early May, and the results were relatively in line with expectations. Revenue was down about 10% from last year, but not because of company struggles, instead due to normal -- and healthy -- cyclical shifts in demand for wind turbines coming out of a very strong 2017. The short-term weakness for Vestas was primarily because of a big decline in deliveries in the U.S., its biggest market. Deliveries fell 65% to 274 MW, while orders declined 12% in the quarter. Deliveries and orders also fell 5% and 18% in EMEA, primarily due to fewer deliveries to the U.K. and order timing in Germany.

So, where's the good news? Vestas' 21.6 billion-euro order backlog is its best ever and should allay fears that Vestas is falling out of favor. The backlog increased 700 million euros from the prior quarter and 8% year over year. With a company like Vestas, investors would do well pay attention to the long-term trends as well as the quarterly results. And the trend is certainly Vestas' friend: Between global population growth, the advent of low-cost utility-scale energy storage, and beating fossil fuels on both emissions and costs, wind has a solid future ahead of it. Trading for less than 15 times trailing earnings, Vestas makes my cut -- again -- as a top energy stock to buy this month.