Optimism appears to be rising among small business owners (SBOs): 53% of the SBOs who participated in TD Bank's 2018 Small Business Survey said they expect their revenues will grow in 2018. That's an improvement over the 46% of respondents who said the same in 2017.

In addition, the number of small businesses -- defined for purposes of the survey as those with $5 million or less in annual revenues -- that plan to hire this year more than doubled. In 2017, only 9% of respondents said they expected to add staff. This year, 22% said they intend to. 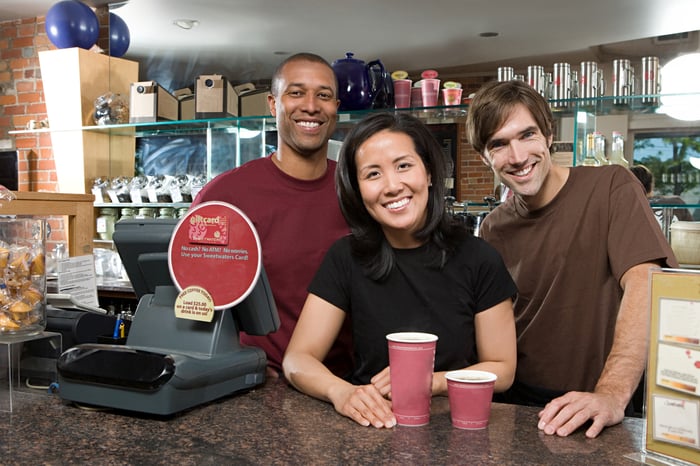 For a business to grow revenue or hire staff, it generally has to lay out more capital. Partly because of that, the number of SBOs who either have applied for fresh credit recently or plan to do so in the next 12 months has increased dramatically as well. In 2017, just 21% said they'd seek new lines of credit. That percentage hit 46% in the 2018 survey.

Expansion and hiring plans aren't the only reasons small businesses are seeking new credit. About one quarter (27%) said that rising interest rates are the factor pushing them either to open fresh lines of credit, or to refinance current debt.

"It is encouraging that a large portion of small business owners plan to seek credit this year and expand," said TD Bank Head of Commercial Specialty Segments Jay DesMarteau in a press release.

What about tax reform?

Small business owners were split roughly evenly in their opinions about whether the Tax Cuts and Jobs Act (TCJA) would help them. Among the half who expect to benefit from the tax overhaul, 15% said they expected it would boost their earnings, while 14% believe that savings from the TCJA will allow them to pay down debt. Similarly, 13% expect to integrate new technology into their businesses, while the same percentage said they would buy new equipment.

It's not all rosy

Though they were generally optimistic, the survey respondents did have some concerns. When asked to pick what they expected would be their two biggest challenges in 2018, about a quarter (27%) said they worried about the health of the economy, and 20% specifically named the tax overhaul as a risk for their businesses. Another 14% said they were worried about inflation, while 13% cited rising interest rates.

But perhaps the biggest challenge facing small business owners involves what they'll do when they are ready to stop being SBOs: 52% said they have no retirement or succession plan. And that percentage climbs to 63% for those ages 55 and older.

"Business owners shouldn't count on today's growth to fund them in retirement or allow the daily challenges of running a company stand in the way of long-term, strategic planning," DesMarteau said. "Working with experts for all financial decisions -- from start-up phase to retirement -- can help put a small business on the best path to success."

Small business owners generally wear a lot of hats, and the need to deal with day-to-day concerns can at times cause them to lose sight of big-picture issues. It's important to plot out a long-term plan that breaks down capital requirements, staffing needs, potential added expenses, and how those needs might be met if revenues take a tumble.

Opening new lines of credit can give a business the wherewithal to attack fresh opportunities, but that comes with risks too. Don't let optimism over a single good quarter or year -- or even a few years --  guide too many of your decisions. Instead, make a business plan that address what you'll do if things go well, and also if they don't turn out quite as expected.