Please ensure Javascript is enabled for purposes of website accessibility
Log In Help Join The Motley Fool
Free Article Join Over 1 Million Premium Members And Get More In-Depth Stock Guidance and Research
By Rich Smith – May 27, 2018 at 7:14AM

Tesla's enjoyed surprising success using lithium-ion battery tech to protect utilities from blackouts. Now Lockheed and others want in on that business.

Everywhere you look in the field of battery technology, Tesla (TSLA -4.59%) seems to be there already. The company's even building a battery gigafactory in the Nevada desert to keep its battery empire well-supplied, and one of the reasons for this is that Tesla is rapidly outgrowing its origins as a car company, and finding new ways to make money by building huge, utility-scale energy storage complexes to help electricity companies shore up the stability of their electric grids.

It's a lucrative business -- and Lockheed Martin (NYSE: LMT) wants in. 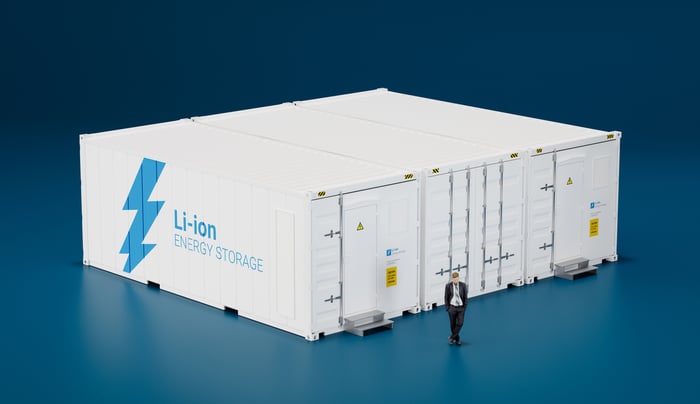 Lithium ions are great for storing electricity, but does a utility really need to use ultra-lightweight, ultra-expensive lithium? Image source: Getty Images.

Last month, Lockheed Martin (LMT -2.13%) announced that it's found a way to make storage batteries for a whole lot cheaper than what lithium-ion batteries currently cost -- by forgoing the lithium.

Now, Lockheed might seem a strange candidate to come up with such a plan. Most investors probably know Lockheed Martin only as a defense giant. And yet, Lockheed Martin also has an active side business in green and renewable technologies, covering everything from generating power from ocean waves to filtering out salt to create potable water to nuclear fusion.

And this is the direction in which Lockheed is leaning with its latest venture. As explained in a Reuters story, Lockheed is working to develop a "flow" battery that utilities can use to store their energy and stabilize their electric grids. Because utilities tend to be geographically grounded, and not move around a lot, light-weighing lithium metal isn't a sine qua non in the batteries they use. Simply put, cost trumps lightness when it comes to building utility-scale batteries.

Playing to this strength, Lockheed says its new battery technology will be made from nontoxic rare-earth metals and chemicals dissolved in a water solution to hold their charge. These materials will be cheap, but not necessarily lightweight like lithium.

Context: Competition is heating up for Tesla

These weren't the only energy storage projects that came up for bid recently, however. Yet another project -- 30 megawatts of storage -- was awarded to AES (AES -2.96%) and Siemens' (SIEGY -2.64%) joint venture Fluence, a start-up those companies set up specifically to compete with Tesla in this growing market. It will be installed at the Ballarat terminal station, owned by AusNet, and operated by EnergyAustralia.

Fluence offers storage in three formats: "Siestorage" (billed as providing "lightning fast energy"), Advancion (designed for "dependability"), and SunFlex (tailored to provide "maximum solar yield") -- each apparently utilizing lithium-ion batteries such as Tesla uses. The company has not revealed which of these solutions will be employed in Australia.

As I've pointed out previously, Tesla's energy storage business produces better gross margins than its better-known electric car business -- where Tesla's also been feeling some heat from the competition as General Motors' electric Bolt steals sales from impatient would-be Tesla Model 3 buyers, and Volkswagen gears up for a major push into electric vehicles. Now, as Tesla faces down a whole host of imitators in the electric car market, its more profitable energy storage business is also coming under attack -- an attack that will only get more intense when Lockheed brings its new flow batteries to market next year.