Please ensure Javascript is enabled for purposes of website accessibility
Log In Help Join The Motley Fool
Free Article Join Over 1 Million Premium Members And Get More In-Depth Stock Guidance and Research
By Rich Smith - Jun 7, 2018 at 8:46AM

At long last, AV has become a pure play on drones.

It was a long time coming, but in the end AeroVironment (AVAV 0.53%) made the right decision: It's bitten the bullet, exited the automotive business, and elected to become a pure-play maker of unmanned aerial vehicles.

The news came on Monday. For $35 million, AeroVironment will sell its "Efficient Energy Systems" (EES) business to German car parts supplier Webasto. In so doing, AeroVironment will retain its much larger unmanned aerial vehicles ("UAVs" or as they're more often referred to, "drones") business, and effectively transform itself into a pure play on drones -- for both military and civilian uses. 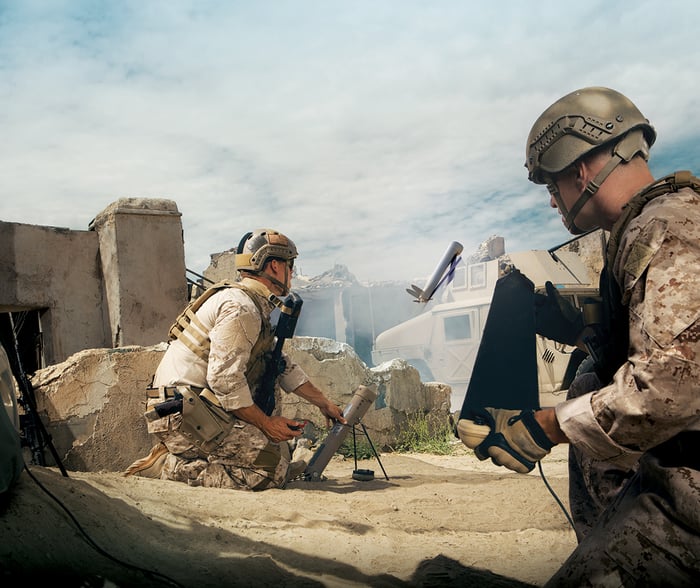 Since its earliest days as a public company, way back in 2007, AeroVironment has split its efforts between two main divisions: drones on the one hand, and equipment for rapidly recharging electric vehicle batteries on the other. Over the ensuing decade, however, one of these divisions has clearly outperformed the other -- UAV sales have more than doubled, while sales in the vehicle charging systems business are up a mere 27%.

Electric cars are all the rage among investors these days, with even car companies as traditional as General Motors and Volkswagen making big bets on electric tech. This week's announcement by Tesla CEO Elon Musk, who says his Model 3 factory is now churning out electro-buggies at a rate of 3,500 units a week, is only likely to increase the enthusiasm for electric cars. That makes now seem like a strange time for AeroVironment to decide to sell its business charging all these car batteries.

And yet, as wild as the excitement about electric cars might be, the numbers at AeroVironment tell a different tale. Data from S&P Global Market Intelligence clearly show that this business has been a loser for AV, with "efficient electric energy systems" revenues last year coming in 30% below their levels five years ago, and EES gross profits down 32%.

In contrast, while revenues from unmanned aerial vehicles have also been sinking at AeroVironment -- down 16% over the past five years to $229 million booked last year -- profits on those sales have been largely improving. At $93 million in gross profit last year, UAV sales are earning AV a 40.6% gross profit margin, versus barely 25% margins at EES.

Last month AeroVironment boasted that contracted sales for just one type of UAV that it makes -- the Switchblade "kamikaze" drone -- topped $111 million  over the last 10 months. Switchblade is a remotely controlled drone armed with a small warhead. It's small enough for an infantryman to carry and launch from a tube (sort of like a mortar). Switchblade then flies to its target, relaying real-time video from an onboard camera. Its operator can literally watch as they guide Switchblade to its target, at which point the weapon detonates its warhead, destroying the last thing viewed through its camera -- and nothing else.

The U.S. military is buying Switchblades hand over fist through "Urgent Need" orders via the Pentagon. And not only the U.S. Army, but now the U.S. Marine Corps too has begun adding AeroVironment Switchblades to its arsenal.

Just one month earlier the company had announced a new initiative it's working on for the U.S. Navy's Coastal Riverine forces. Unarmed AeroVironment Puma surveillance drones will cooperate with the Switchblade attack drones to create an integrated defense network, with Pumas detecting threats and Switchblades neutralizing them. AeroVironment plans to begin deploying this system for the Navy as early as autumn 2018.

Why this is the right move

If Switchblade orders continue to come in at a rate of $111 million a year, they'll easily account for nearly half of AeroVironment's business, and help boost the profitability of the business as a whole beyond what AeroVironment was earning while burdened with the underperforming EES unit. Freed from the distraction of running what amounts to a civilian auto parts business, it's also entirely possible we'll see the company improve the margins of its drones business by putting greater focus on it.

Whether the business will improve enough to justify the stock's 45-times-earnings valuation remains an open question, of course. I also wouldn't mind seeing AV's free cash flow number improve just a bit -- at present, the company is generating only about $0.66 in real cash profits for every $1 in GAAP "net income" it reports.

But if you ask me, getting rid of the EES division is at least a step in the right direction.