German auto giant Volkswagen AG (OTC:VWAGY) said that it will launch its own urban car-sharing service, starting next year in Germany and rolling out worldwide in 2020. It's similar to existing services, but with a twist: The new service's cars will be 100% electric.

VW said that it will roll out its new car-sharing service starting next year in Germany, and that it will expand to "major cities in Europe, North America, and Asia" starting in 2020. Customers will use VW's "WE" app to find nearby cars and arrange to rent them.

The concept isn't a new one -- it's what businesses like Zipcar and General Motors' (NYSE:GM) Maven have been doing for several years. But VW is adding a twist: All of the vehicles in its service will be battery-electric. 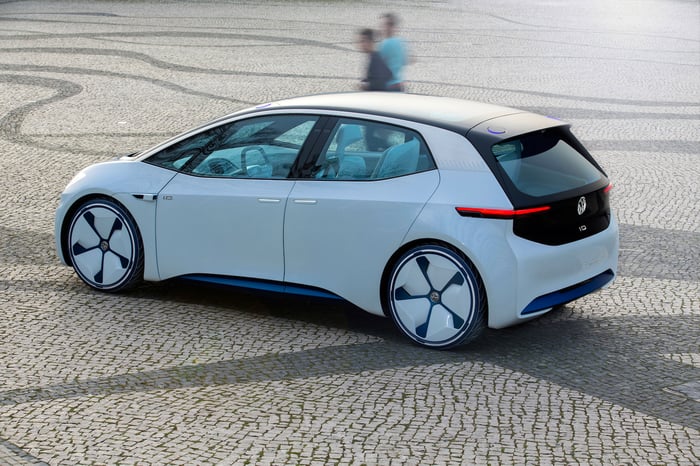 VW said that the new service will be managed by a wholly owned VW subsidiary called UMI, for Urban Mobility International GmbH. In a statement, UMI CEO Philipp Reth promised an "environmentally friendly fleet that takes [customers] to their destination quickly and at a fair price."

VW said that this new car-sharing service is part of a suite of mobility-related services that it eventually plans to offer via the WE app. It's similar in concept to Ford Motor Company's (NYSE:F) FordPass, a smartphone app that will -- eventually -- offer customers everything from bicycle rentals to car-sharing to discounted parking in cities.

Why is VW launching a car-sharing service?

First, some background. VW is investing heavily in what it expects to be a major shift to electric vehicles over the next several years. It's expected to launch the first of a series of affordable long-range battery-electric vehicles next year, a VW-branded hatchback similar in size to its Golf.

It's believed that that new electric VW will be very similar to the I.D. concept vehicle that VW first showed back in 2016. At the time, VW said that I.D. would go into production as a 2020 model -- but it later hinted that the car could begin arriving at dealers, at least in Europe, in 2019.

Given that, I can see two good reasons why VW might want to launch a car-sharing service next year.

First, it's a way to market the new electric VW to a sophisticated, young, urban audience that might not be ready to buy cars of their own -- but that are likely to be receptive to the idea of buying an electric vehicle. In the meantime, they might well be car-sharing customers -- and if they're impressed by the electric VW, they might make the VW dealership their first and only stop when it's time to buy cars of their own.

Second, the car-sharing service gives VW a hedge if early sales of its new electric vehicle don't meet its expectations. The truth is, nobody really knows how well a mass-market electric VW will sell. Rivals like GM's Chevrolet Bolt and Nissan's Leaf have done well -- but they were launched with modest expectations. VW's expectations are grander: It wants to be selling 3 million electric vehicles a year by 2025.

The upshot: This is as much about electric cars as it is about "mobility"

In addition to the obvious reason to start a car-sharing service -- as a hedge against disruption from mobility newcomers -- VW's new service is almost certainly a component of its plan to become a major producer of battery-electric vehicles.

It's yet another sign that VW's commitment to electrification isn't just window dressing -- and that the company plans to survive and thrive as the car industry transforms.