It was a long time coming, but Australia has finally made its decision. As part of a multiyear, multibillion-dollar effort to beef up its defenses to face down an expansionist China, America's ally down under has tapped Britain's BAE Systems (OTC:BAES.Y) to build nine shiny new Hunter-class frigates -- for $26 billion.

Here's why I think that makes BAE a bargain at current prices. 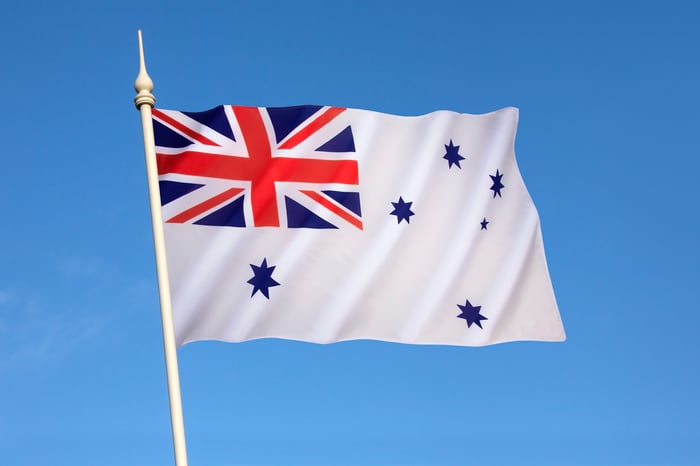 BAE stock has underperformed the market this past year -- but don't wave the white flag just yet. This stock is a bargain. Image source: Getty Images.

Comprising roughly 50 warships, Australia's surface fleet centers on two Canberra-class landing helicopter docks (LHDs) and one Bay-class landing ship, dock (LSD). Problem is, to defend these amphibious warfare vessels from missile and submarine attack, Australia is relying largely on eight aging Anzac-class frigates. The youngest of these Anzacs was commissioned in 2006, but the oldest is nearly a quarter-century old, commissioned in 1996. (Australia also has two even older Adelaide-class frigates, commissioned in the early '90s, and a single Hobart-class air warfare destroyer, commissioned just last year.)

Simply put, the Royal Australian Navy is in need of a refresh. To do this, Australia is bringing in BAE to run its ASC Shipbuilding shipyard (and in fact, to take it on as a subsidiary for the duration of the contract). At ASC, BAE will build nine frigates based on its new Type 26 design. This is a huge vessel running to 492 feet in length and displacing 6,900 tons, which makes it nearly as big as an American Arleigh Burke-class destroyer -- and roughly twice as big as the Anzac-class ships it will replace.

What it means to Australia

Australia's new Hunter-class frigates should greatly upgrade its anti-submarine warfare capabilities. The warships should have "significant" anti-submarine warfare capabilities, including an "acoustically quiet" design to defeat detection by sonar, and the ability to launch Merlin and Wildcat maritime helicopters. Its radar, Aegis Combat System (from Lockheed), and Sea Ceptor anti-aircraft missiles will add air defense capabilities, and the frigates will also carry 24 anti-ship missiles plus a medium-caliber cannon for offense.

All in all, BAE is offering the Royal Australian Navy an impressive package of capabilities. For investors, the rewards could be even bigger.

Australia announced it was awarding the Hunter contract to BAE on June 29, but the stock has only gained about 3% since that announcement. Currently, BAE stock sells for about 1.2 times trailing sales, 24.5 times trailing earnings -- but a mere 14.2 times trailing free cash flow. I'd argue these prices are too low to capture the added value BAE stock gained with this contract win.

Consider: Data from S&P Global Market Intelligence show analysts forecasting only 5% annualized earnings growth for BAE Systems over the next five years. But construction of the first Hunter-class frigate is set to begin just two years from now, and full-rate production should be ramping up well within that five-year time span -- by 2022, according to DefenseNews.com. From then on, production should hum along nicely, from the first commissioning of a new frigate roughly 10 years from now until completion of the nine vessels on order.

Ultimately, BAE expects to book $26 billion in revenue from this contract -- more than one full year of sales from all its businesses at current run rates. Spread over 10 years of construction, or even 20, the Hunter contract alone can be expected to add 5% or more to BAE's annual revenue growth rate.

Can this contract likewise double the rate of earnings growth Wall Street is expecting? I believe so.

According to BAE's latest annual report for fiscal year 2017, maritime work generated operating profit margins of 8.4% last year, slightly ahead of the company's overall operating profit margin of 8.3%. I'd expect, therefore, that the $26 billion in Hunter revenues that will now be pouring into BAE's coffers will be at least as profitable as the revenue it's been earning so far, and probably slightly more profitable.

Based on that assumption, I think an earnings growth rate of 10% or better is not out of the question for BAE -- twice what Wall Street is forecasting. Combined with the stock's generous 3.9% dividend yield, that makes for a roughly 14% total return on the stock annually -- right in line with BAE's 14.2 ratio of enterprise value to free cash flow.

Long story short, it isn't often you see a stock's prospects changed by the winning of just one contract -- but this is one of those times. Thanks to its contract win in Australia, BAE Systems stock has finally become a bargain.