Second-quarter earnings from leading staffing company Robert Half International (NYSE:RHI) revealed a company experiencing strong end markets -- that's good news for Robert Half and for the economy at large. The company is benefiting nicely from cyclical strength in the economy and a pickup in the hiring market.

Let's take a look at the earnings report and what it means about the economy. 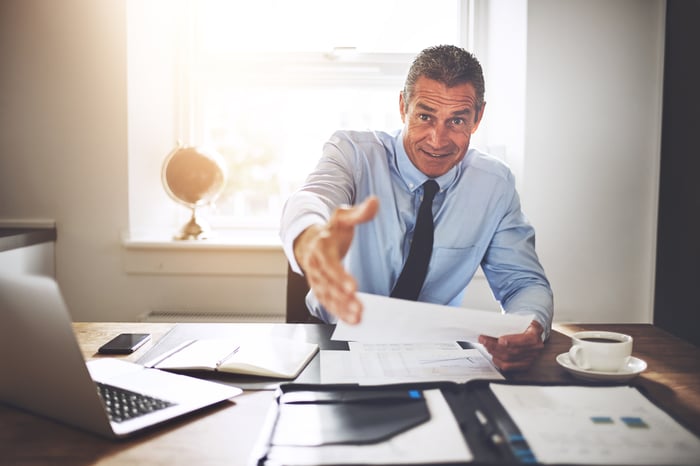 Robert Half had a good quarter, and based on management's discussion of ongoing trends, it's beginning the third quarter with powerful industry tailwinds behind it.

In order to give investors a flavor for current trading, CFO Keith Waddell outlines revenue growth in the last month of the quarter and the first couple of weeks trading in the new quarter, and then compares it to growth across the quarter. As you can see below, growth appears to be improving.

Based on the figures above, Robert Half's growth in the third quarter is currently running at a higher rate than through the second quarter -- a very good sign.

This is the kind of revenue and earnings growth you might expect in the upswing of a highly cyclical company like Robert Half, but the good news is Waddell is optimistic that the company is in the early stages of the cycle rather than the late stage.

On the earnings call, Waddell argued that bill rates are rising (a 3.7% increase compared to a 2.5% increase in the same period last year), but "if you look at the period 2004 through 2008, we were consistently getting 5% to 6% rises in bill rates driven by higher pay rates, which were slightly less than that."

It's always useful to look at trends in the company's permanent and temporary placement revenue. Having turned positive in the fourth quarter, U.S. temporary and consultant staffing revenue growth is now following U.S. permanent revenue growth. This is a traditional pattern in a recovery as permanent hiring takes more of a hit in the slowdown and tends to rebound strongly in the early stages of a recovery. 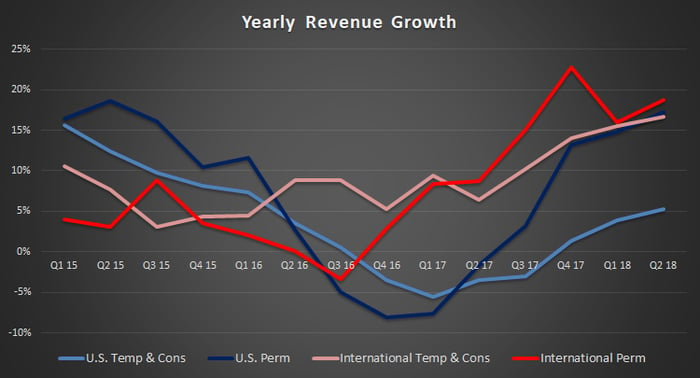 An improvement in U.S. temporary and consultant hiring is important as it generated more than 70% of total operating income compared to around 18% from permanent placing and 12% from risk consulting and internal audit services.

A good earnings report and Robert Half's earnings growth is likely to be impressive for the next few quarters, but the question is: Where is the employment cycle headed next year? If Waddell is right and the cycle has legs, then Robert Half could see multi-year growth. But if the economy is hitting a peak, then employment gains could plateau.