Japan earlier this week successfully detected and shot down a test ballistic missile, a major step forward in the country's effort to better protect its homeland from threats from North Korea and elsewhere. It also helps solidify coordination between Japanese and U.S. military forces when it comes to missile defense and provides fresh momentum to a pair of defense contractors leading that effort.

The Sept. 11 test was conducted by Japan Maritime Self-Defense Force and the U.S. Missile Defense Agency, in cooperation with the U.S. Navy, off the coast of Hawaii's Kauai Island. It required crew members aboard guided-missile destroyer JS Atago to detect, track, and target the missile, which was eventually intercepted over the Pacific Ocean. 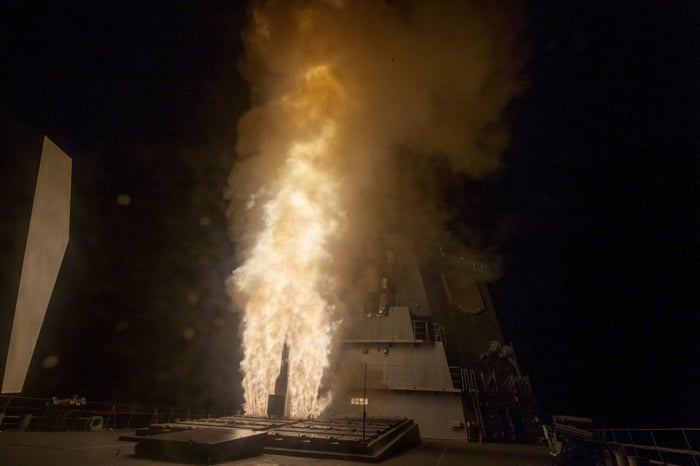 A Raytheon-built interceptor is launched off of the JS Atago during a Pacific Ocean test. Image source: Lockheed Martin.

A version of Lockheed Martin's (NYSE:LMT) high-tech Aegis weapon system upgraded for ballistic missile defense (BMD) provided the computing power and radars used in the test, while a Raytheon-built (NYSE:RTN) SM-3 interceptor was fired at the target.

Lt. General Sam Greaves, director of the Missile Defense Agency, in a statement, called the test "a major milestone verifying the capabilities of an upgraded Aegis BMD configuration for Japan's destroyers." It is also a welcome bit of good news for a system that, despite some recent hiccups, is seen as the best option for protecting Hawaii, Guam, and a range of ally territories against potential threats from the Korean Peninsula.

Meeting the challenge of missile defense

The Aegis system, paired with SM-3 interceptors, is the primary regional defense against ballistic missiles, boasting a decent 80%-plus success rate in intercept tests. But there have been two high-profile test failures in recent months involving SM-3s.

This latest test is the fifth time Japan has successfully intercepted a ballistic missile from one of its warships and the first time it has used the current-generation SM-3 and Aegis technology. Gen. Greaves of the MDA in a statement said the latest test "provides confidence in the future capability for Japan to defeat the developing threats in the region."

It's also a fresh validation of systems developed by Lockheed and Raytheon. The Aegis/SM-3 regional defense combination on display is one of a number of options to counter missile threats, and with Washington focused on modernizing ballistic defense, expect to see increased funding for these systems as well as ground-based mid-course systems involving Raytheon, Northrop Grumman, and Boeing, as well as other options.

Positive demonstrations should help ensure Lockheed and Raytheon receive a significant share of the nearly $50 billion the Pentagon expects to invest in missile defense over the next five years.

Success should also provide opportunities for Lockheed and Raytheon to win more business in the region. In July, Japan committed to buy $1.2 billion worth of radar arrays from Lockheed for two planned Aegis Ashore stations to be built on land.

The U.S. Navy, worried that demand for Aegis systems for missile defense is causing wear and tear on its Arleigh Burke–class destroyers, is pushing for the Pentagon and allies to move missile detection on shore where practical. Given the system's high costs -- Japan is expected to spend more than $2 billion on the development of its two onshore sites -- additional foreign sales opportunities will be limited, but as the system continues to prove its effectiveness, the Pentagon could view expanding its ground-based presence as a relatively inexpensive way to free up resources and help meet the White House's demand for a larger navy.

The optimism is justified

U.S. lawmakers have committed to spending big on ballistic missile defense. Investors can expect both Lockheed Martin and Raytheon to take in billions in additional revenue in the years to come in response to that push -- assuming, of course, they can show that the systems they are developing actually work.

A failed test isn't a reason to sell, given the importance of the mission and the Pentagon's history of accepting trial and error when trying to develop bleeding-edge new systems. And given shares of Raytheon and Lockheed Martin are up 88% and 60% over the past three years, respectively, in part because investors have anticipated that spending uptick, I wouldn't call a successful test a reason to buy in.

But the tests are still worth watching. With each success, the probability of additional orders does increase, and the case for holding on to shares even at these lofty valuations becomes a little easier to justify. The evidence coming out of the Pacific test range would suggest Lockheed Martin and Raytheon are on track to deliver what the customer wants.

Successful intercept tests should go a long way to ensuring that defense investors, along with those who live within range of North Korea's rockets, are able to sleep soundly at night.