Lawmakers last week finalized the fiscal 2019 Department of Defense budget, the first time in more than a decade that the Pentagon will have its annual funding secured before the federal government's fiscal year begins on Oct. 1. The total amount, $674.4 billion, is no surprise, but the details contained within spell out clear winners among defense contractors, and telegraph Pentagon priorities for years to come.

The size of the budget was hashed out in a two-year compromise reached earlier this year that brought a temporary end to sequestration, freeing up nearly $100 billion in fiscal 2018 and 2019. Some of that spending will go toward troops -- military personnel are set to get a 2.6% raise, and a boost in the number of troops has been approved as well -- but Congress  also allotted $148 billion to equipment procurement and $96.1 billion to research and development, most of which will find its way to defense contractors. 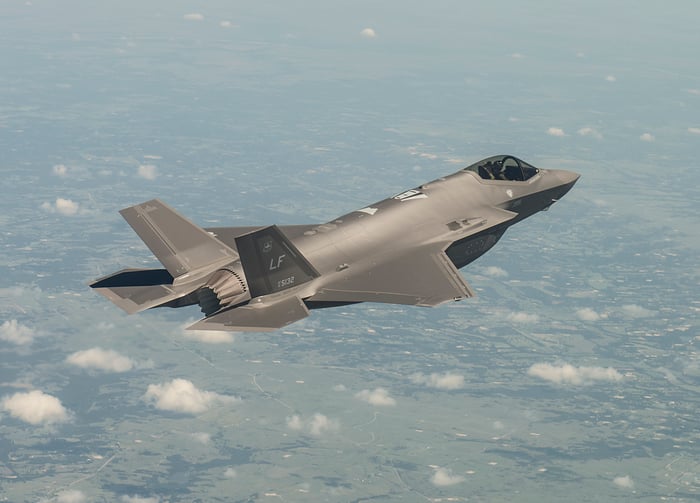 In simple terms, the entire industry is a winner from the quicker-than-usual pace, as the Pentagon will have a full year to allocate funds and work through a backlog of projects that were put on hold during the budget battles that stripped funding earlier in the decade. It also lessens the chance there will be a massive amount of "unobligated funds" -- money appropriated, but not spent -- the growth of which is a trend that has drawn ire among some in Congress.

More specifically, the budgeting process resulted in big wins relative to what the Pentagon requested for Lockheed Martin (NYSE:LMT), good news for Huntington Ingalls (NYSE:HII), and reason to hope that Textron (NYSE:TXT) can expand its military business.

Here are some of the highlights, as well as some thoughts about where defense spending is headed in future years.

The biggest is getting bigger

Lockheed Martin, with more than $50 billion in revenue, ranks as the world's largest pure-play defense contractor. And the new budget made it clear that Congress' priorities align with some of the company's biggest programs.

The Pentagon requested funds to buy 77 F-35 fighters in 2019, down from 90 in 2018 -- but Congress found funds for an additional 16 frames, meaning F-35 production will go up year over year. The program is a massive and growing operation for Lockheed Martin, but concerns about the jet's cost, and talk of a new fighter that might avoid some of the F-35's perceived shortcomings, have led to some concern that the initial projections for the total number of jets to be sold won't be met.

Those concerns are still valid, as Congress will likely have to intervene again in future years if they want to keep F-35 production growing. But for now, this trillion-dollar-program remains in growth mode.

Lockheed could also benefit from Congress' insistence that the Navy buy more littoral combat ships, in what is likely the last year of the program. Lockheed and the U.S. arm of Australian shipbuilder Austal both build variants of the LCS, and each has submitted a bid for the planned FFG(X) guided-missile frigate set to replace it. Since both based their frigate designs on their LCS frames, the $950 million allocation to keep the shipyards running while the FFG(X) competition plays out will be a welcome bonus.

The carriers are coming

Huntington Ingalls, the shipbuilding specialist that operates the massive Newport News, Virginia, shipyard, has been lobbying for years for the Navy to commit to multiple-carrier orders. The company asserts that buying in bulk would both provide savings for the customer in materials and labor, and help it streamline operations by keeping workers on the job for longer, thus reducing training costs and other expenses.

The Navy seemingly has warmed to the idea, but Congress remains unconvinced. The USS Gerald R. Ford, the first of a new class of carrier now in testing, came in significantly over budget, and the next carrier to be ordered is expected to cost more than $15 billion.

The news here is that while Congress is not ready to accept Navy estimates that a block buy could save upward of 10% of the total cost of the ships, it's open to considering the argument. The budget document suggests that if the Navy can produce an independent cost estimate, and alleviate concerns that the carriers would soak up funds to the detriment of other Navy priorities, Congress would be interested.

It's too early to unfurl a "mission accomplished" banner on the Huntington carrier deck, but the company's dream of a carrier bulk buy is gaining momentum. The clear message here is that if company and Naval officials can make a solid case, Congress will not say no.

Textron manufactures a wide range of products -- from business jets to helicopters to golf carts and turf equipment -- but the company in recent years has prioritized growing its defense revenue. The Pentagon has cast a skeptical eye toward some of its potential offerings, but Congress remains a believer.

Textron has one of the two finalists in the contest to produce an Air Force light attack aircraft, a propeller-powered throwback that would be cheaper to manufacture and operate than a jet, and also travel at lower speeds, allowing it to linger over a battlefield. Those attributes would make it an easy target for advanced enemy aircraft, but advocates for the plane say it would be useful against insurgents and other foes who lack sophisticated air combat and defense systems.

The Air Force remains unconvinced, insisting as recently as August that although it is tentatively moving forward with the program, it has not yet made a final decision to buy planes from either Textron or rival Embraer. Congress is much more supportive, budgeting $100 million for long lead time materials. If the program accelerates, it could be worth up to $6 billion in sales to the eventual winner.

While total defense spending will increase in fiscal 2019, Pentagon planners have indicated they are expecting the 2020 request to be flat. Defense officials believe there are cost-cutting opportunities that would allow procurement spending to continue to rise even if the allocation doesn't, but even if that pans out, there figure to be some hard choices to be made ahead.

Though it's tough to predict which specific programs are most at risk, clues can be found in a Pentagon outline of priorities published earlier this year. Defense officials advocate for "a more lethal, resilient, and rapidly innovating joint force," and they're focused on modernization and worried about future effectiveness of legacy systems.

If the Pentagon is forced to pick between priorities, expect it to favor high-tech over legacy. That would be good news for Lockheed Martin's hypersonics program and the F-35, but potentially risky for some of the tanks, troop transports, and other ground systems that have been worn down by years of fighting in the Middle East.

It could also mean trouble for programs that Congress has pushed for despite Pentagon objections, including the light attack aircraft competition and a $7 billion JSTARS refresh that Boeing, Northrop Grumman, and Lockheed are competing for.

With the Pentagon in spending mode, the entire defense sector looks likely to experience revenue growth in the year to come. Lockheed, a company firing on all cylinders, looks best-positioned to capitalize on the trend.

An argument can be made that there are better values elsewhere in the defense sector, but right now, Lockheed Martin clearly has the most momentum.