The U.S. government is backing three candidates in the development and testing of prototypes of a new space launch system, awarding more than $2.2 billion in funding to build the next generation of rockets designed to carry military payloads into space.

The Air Force on Oct. 10 awarded $967 million to United Launch Alliance (ULA), a joint venture between Boeing (NYSE:BA) and Lockheed Martin (NYSE:LMT); $792 million to Northrop Grumman (NYSE:NOC); and $500 million to Jeff Bezos' Blue Origin. The government said it intends to eventually select two national security space launch service providers for future procurements, with a decision not expected before 2020 at the earliest. 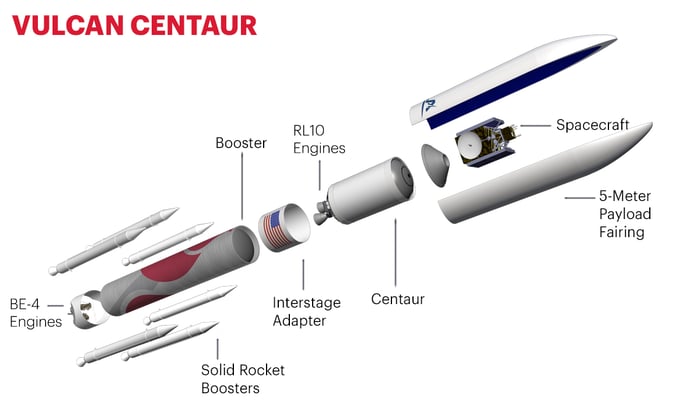 The competition will help determine who will eventually get the awards in one of the Air Force's most important space-based ventures, a program that has launched 72 missions dating back to 2003.

United Launch Alliance is a longtime military space vendor, launching payloads into orbit in recent years via its Delta 4 and Atlas 5 rockets. But the venture's use of Russian-built RD-180 engines has made it a target of criticism in recent years. A congressional mandate that military launches move away from using Russian-built equipment helped spark this new bake-off and forced ULA to find other sources for its lift power.

The new ULA offering, the Vulcan Centaur rocket, would be powered by Blue Origin engines for its first stage and rockets made by Aerojet Rocketdyne (NYSE:AJRD) for stage two.

Northrop Grumman, meanwhile, is offering the Omega launch system it acquired as part of its recent $9.2 billion deal for Orbital ATK. The Omega would use a mix of in-house propulsion systems and Aerojet engines, and Northrop in its bid has emphasized the reliability and cost savings that would come from basing its launcher on its family of smaller rockets, including the Antares, Minotaur, and Pegasus, already in use to launch government payloads.

The Omega would share a common propulsion, structure, and avionics system with rockets already in use, and draw from the experience gained from Northrop Grumman building, on average, 20 rockets per year.

Notably absent from the awards was SpaceX, the start-up funded by Elon Musk, which has worked with the government in the past. The award only means that SpaceX will not receive government development funding and does not preclude it from bidding on further contracts. In June, SpaceX was awarded a $130 million contract to deliver an Air Force satellite into orbit using its Falcon Heavy rockets.

High stakes for some

ULA arguably has the most to lose, given that the previous 72 missions launched under this program have all used its vehicles. United Launch Alliance has already borne the brunt of an increasingly competitive space landscape, announcing layoffs in 2016 designed to bring down costs and make it more competitive against SpaceX and others.

Lockheed Martin was rumored to be pushing to exit ULA back in 2015, but Boeing balked at the time. Boeing's space and defense business has recently won a string of new contracts that should make the unit less reliant on ULA revenue and cross-selling opportunities. A loss here, or even a win, could cause the parties to reconsider ending the joint venture, with a ULA merger with Aerojet one possibility.

Northrop, meanwhile, bought Orbital ATK with opportunities like this one in mind, and success here could go a long way toward justifying the big-budget purchase.

Blue Origin would seem to have the least to lose and the most to win. The company's selection onto the Vulcan Centaur platform was a big shot in the arm for the company that gives it two chances to secure a new stream of revenue that would supplement Bezos' funding and help it to continue development on a range of technologies needed for its space transportation and tourism business.

Will there be winners?

It's hard to handicap a competition, but the Air Force in announcing its selections stressed the need to sustain a competitive market for military launches. The most reliable way for the government to accomplish that goal is to make sure two longtime partners -- in this case ULA and Northrop -- are cleared to win additional launches.

As stated above, Blue Origin stands to win even if it loses, and the experience (not to mention funding) it receives as being part of these initial awards should help the company to develop and to better familiarize itself with the government contracting process.

For individual investors there might not be much of a reason to cheer a win. With SpaceX and now Blue Origin building relationships with the Pentagon, and ULA and Northrop both plugging along, the government could eventually have at least four viable contractors for some launches, a dream scenario for the customer but a potential nightmare for launch margins. The newcomers today enjoy a substantial cost advantage compared with the incumbents, though ULA and Northrop are working to close that gap with these new designs.

Fortunately, this isn't make or break for any large contractor. Boeing and Lockheed Martin have enough other things going right to weather issues with ULA. For Northrop there is more at stake because the company paid up for Orbital, but even without this contract the Orbital business is performing well and has a steady backlog.

The government's initial challenge -- eliminating its reliance on the Russians -- is looking more achievable by the day. The separate challenge of finding enough work to keep this robust supplier base vibrant could be even more daunting.