Hong Kong and Singapore have similar history and economic conditions. Both are small, open economies with no natural resources. Both have developed from British colonies and evolved their industrial structures from labor-intensive industries such as textiles and clothing to high-tech industries such as electronics and then to banking and financial services. The two cities have comparable economic performance and competitiveness and are often placed close to each other in various rankings.

Hong Kong and Singapore have also been close business partners for decades. Singaporean banks such as DBS and OCBC have been expanding their footprint in Hong Kong in recent years. Old British companies such as Hongkong Land and Mandarin Oriental came to Singapore for listing in 1980s, though the majority of their assets are still situated and managed in Hong Kong. Hong Kong tycoon Li Ka Shing span off Hutchison Port as a Trust in the Singapore Exchange in 2011. 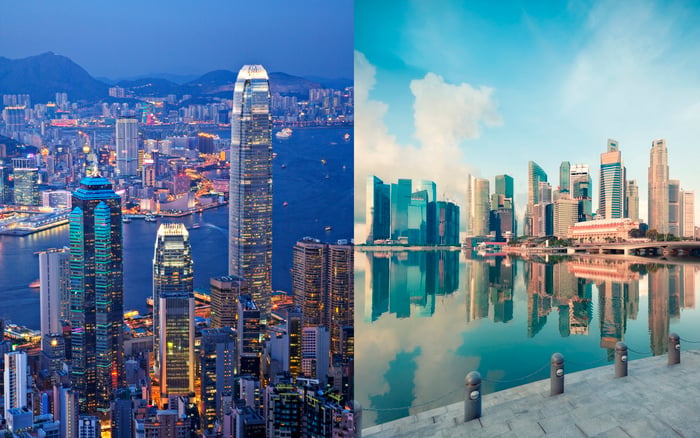 Given all their similarities, you may be surprised by what I'm about to show you next. I've compared the performance of each country's broad market index going back to the early 1990s (a span of 26-plus years). 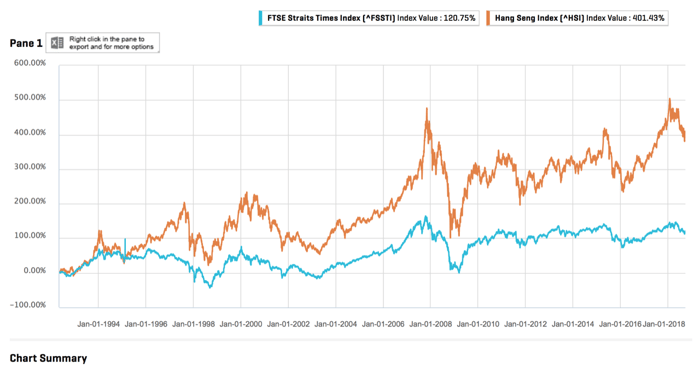 We learned from Economics 101 that the rate of growth of gross domestic product (GDP) can give us a handle on what the market return is likely to be. GDP growth will come from increased business activity in the country; that metric tends to get captured by a broad market index like HSI or STI. Surprisingly, the GDP growth rate is similar between Hong Kong and Singapore in these past few decades. So how can it be that the HSI so handily outperformed the STI?

The "China Factor" on the Hang Seng Index

Both Hong Kong and Singapore have world-class financial infrastructure, but in terms of stock market performance, Hong Kong has benefited greatly from its role as the preferred listing destination for bridging Chinese companies to world capital markets.

The first Chinese state-owned enterprise (SOE), Tsingtao Brewery, came to be listed in the Hong Kong Stock Exchange in 1993. Giant state-owned company China Mobile was included in the Hang Seng Index in the late 1990s. Now, nine out of 10 largest stocks in Hang Seng Index are China-based companies.

Both Hong Kong and Singapore turned to mature economies with 3%-4% GDP growth after the Asian Financial Crisis in 1997. However, China was growing robustly with a double-digit GDP growth rate until the 2008 Global Financial Crisis. Even today, China's GDP is expected to grow at around 6%. As more and more China-based companies are included into the Hang Seng Index starting in the 2000s, the return of Hong Kong stocks has been a way to leverage the China Economic Miracle. That's partly explained the outstanding performance of the Hang Seng Index over the past 20-plus years.

Want to know more about the Hong Kong market?

I've recently published a Special FREE Report on the Hong Kong Market: The 4 Rules for Winning in the Stock Market: A Foolish Guide for Hong Kong Investors. What's more, Hong Kong property is infamous for having the highest prices in the world. (For good or for bad depends on whether you look at it from a landlord's or tenant's point of view.) But is it the best-performing asset class in Hong Kong? I walk you through some historical figures about the myth of the red-hot Hong Kong real estate miracle.

Hong Kong Vs. Singapore: Which Stock Market Has Been the Better Performer? @themotleyfool #stocks Next Article
Current