Tile Shop Holdings Inc. (NASDAQ:TTSH) reported third-quarter results before market open on Thursday, delivering something investors have hoped to see for multiple quarters now: growth from its existing store base, following a major shift in strategy late last year that took a huge bite out of sales.

Tile Shop's sales at stores open more than one year -- called comps -- had fallen three straight quarters heading into today's release. That completely caught the market off guard in February when the company announced fourth-quarter results, which sent the stock tumbling over 30% at one point. But investors gave the company a pass in the first quarter, and initially rewarded it in the second quarter, despite steadily poor results that offered little proof that the strategic shift to focus on higher-end customers was working. 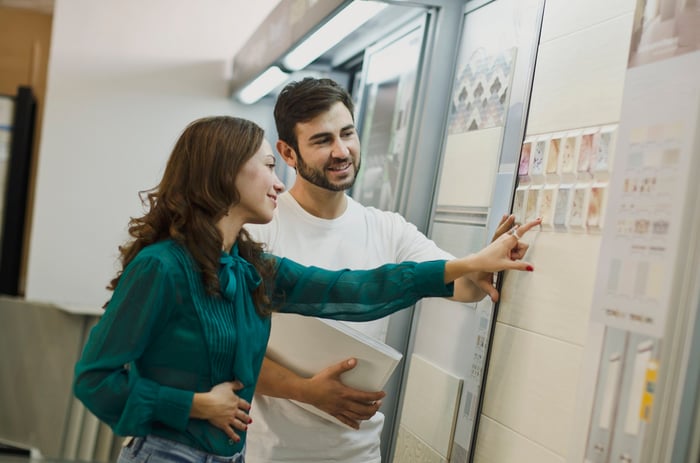 Not only did Tile Shop finally see comp sales start growing again in its latest report, but the company also reported its best gross margins in years, a sign that things could finally be turning for the better.

High-end focus starts to pay off, but higher expenses still weigh on profits

Here's a look at Tile Shop's results across some key metrics:

As we have seen in each of the prior three quarters, Tile Shop's emphasis on higher-end product, along with its significant reduction in promotional pricing and discounting, is driving margins higher. At 70.6%, this was Tile Shop's highest gross margin in more than five years.

However, higher operating expenses continue to prevent the company from fully realizing the profit potential of its higher-margin focus. Despite the jump in higher-margin sales, earnings came in flat at $0.05 per share, while adjusted EBITDA declined.

If we peel back the layers a bit on Tile Shop's results, we can see why expenses increased.

Part of this is increased debt. Interest expense was up 41% in the quarter, as management has increased the use of debt in recent quarters to help finance store improvements and the buildup of inventory to support its new high-end focus. Since the start of 2018, long-term debt has increased from $18 million to $46 million. In terms of dollar increases, interest expense in the quarter was only $210,000 higher year over year, so despite the big percentage increase, the real dollar impact isn't as substantial as it would seem.

By far the biggest portion of expense growth is management's efforts to spend more to support the stores. Sales, general, and administrative expenses increased 13% in the quarter, up nearly $7 million. This more than offset the roughly $6.5 million increase in gross profit dollars.

The company is seeing some progress, but it appears that it will continue to take time for all of the investments in moving upmarket to pay off with earnings growth. Management sees hope, however. In the earnings release, interim CEO Bob Rucker said the following:

We are nearly complete with our yearlong product assortment initiative, and we continue to attract pros who share in our focus on serving a higher-end demographic. With the improvement we are now beginning to see in our sales execution, we continued to make additional investments in inventory, store merchandising, and service during the third quarter. We are extremely focused on improving our key metrics as we fully restore and further enhance the model which has proven successful for over 30 years.

The company still won't offer any guidance on sales or profits, which makes sense, frankly. There's still work to be done remodeling stores, and the inventory realignment to support its strategy isn't complete. But nearly one year into this major shift, this quarter finally offered some evidence that it will pay off over the long term.