Please ensure Javascript is enabled for purposes of website accessibility
Log In Help Join The Motley Fool
Free Article Join Over 1 Million Premium Members And Get More In-Depth Stock Guidance and Research
By Harsh Chauhan – Nov 14, 2018 at 10:16AM

The cybersecurity specialist is doing the right things to accelerate growth.

Check Point Software Technologies (CHKP -0.85%) has failed to excite Wall Street with its safety-first approach, but things could soon change for the better. The cybersecurity specialist's third-quarter results turned out to be better than expected, thanks to solid growth across the board.

Now, the growth in Check Point's headline numbers wasn't all that great. Its revenue shot up just 4% year over year, which isn't a big number considering the pace at which the cybersecurity market is growing. However, Check Point's latest strategic move makes it clear that the company is looking for ways to boost its tepid growth. Along with its third-quarter results, Check Point also announced that it has closed the acquisition of cloud security firm Dome9 to bolster its Infinity cyber-defense platform and win over more enterprise customers. Check Point hasn't disclosed the full details of the deal, but it did reveal that it paid $175 million in cash.

Check Point has done the right thing by acquiring Dome9's technology, which secures cloud servers and ensures the application of corporate security policies across the entire cloud infrastructure system. It also ensures that apps on the cloud are running with security settings in line with a company's guidelines.

As a result, Check Point now has a more comprehensive cloud security offering, which will help it attack a niche that's in its early phases of growth. The cloud security market was reportedly worth $4 billion at the end of last year, but it could triple to nearly $13 billion by 2022, according to one estimate.

This isn't surprising, as the deployment of public cloud services is growing at a pace of more than 20% a year. Cloud service providers and users will be spending more money on securing their networks, creating an opportunity for Check Point to grow sales. More importantly, Check Point now has a solution that it can offer to its existing clients and increase the probability of cross-sales.

Check Point investors can now expect the company's key metrics, such as deferred revenue and margins, to keep improving in subsequent quarters after a strong showing in the last one.

Check Point Software has been displaying tangible signs of improvement of late. For instance, the company's deferred revenue increased 11% year over year last quarter to $1.15 billion, a sequential jump of 2 percentage points.

Deferred revenue is an important indicator of potential growth, as it's the amount of money received by a company for services to be delivered at a later date. The fact that this metric grew at a faster pace than actual revenue indicates that Check Point is now able to lock more customers into long-term contracts. This should ensure a steady stream of subscription revenue in the long run.

Another important change that Check Point investors shouldn't miss is that it is ramping up its marketing expenses. The company spent $124 million on sales and marketing during the third quarter, up nearly 17% from the prior-year period. In fact, Check Point spent just over 26% of its total revenue on this line item, up from 23% last year.

Along with the acquisition, the bump in sales and marketing expenses shows a change in how Check Point is approaching its business. Earlier the company was hesitant to spend much on marketing; it had been looking to support its bottom line by way of buybacks. However, it lost momentum to rivals that were turning up their customer-acquisition efforts.

But Check Point is now heading in the right direction, aggressively pushing its marketing efforts in a bid to acquire more customers: 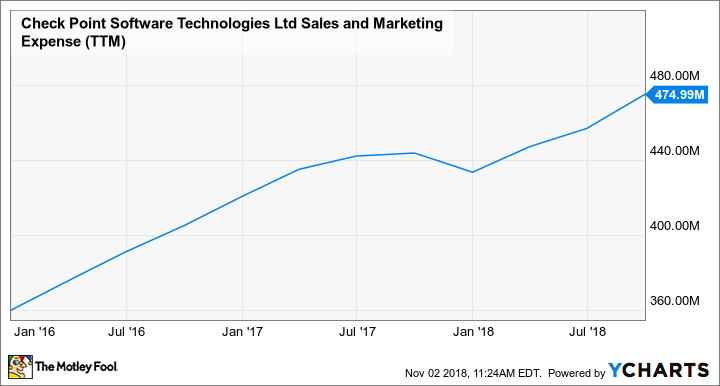 In all, Check Point's third-quarter report indicates that the company's efforts to boost sales are paying off. The latest acquisition ensures that it has a new product to sell to existing customers, while a stronger marketing effort will help it bring new accounts into its ecosystem. This makes Check Point Software an attractive bet for value-oriented investors, as it trades at just 17 times forward earnings -- which is well below the pricey industry average of 97.