Please ensure Javascript is enabled for purposes of website accessibility
Free Article Join Over 1 Million Premium Members And Get More In-Depth Stock Guidance and Research
By Adam Levine-Weinberg - Dec 4, 2018 at 8:55AM

Spirit Airlines stock has surged since the budget carrier boosted its unit revenue guidance last Monday. Yet the stock could go even higher if Spirit Airlines can sustain its recent revenue momentum in 2019.

Since losing roughly half of their value in 2015, shares of Spirit Airlines ( SAVE -1.74% ) have made several recovery attempts. However, each rally has eventually faded, as a combination of rising fuel prices and weak unit revenue trends has weighed on Spirit's profitability.

Spirit Airlines stock began to regain some momentum in mid-October, after the company raised its Q3 unit revenue growth forecast to 5.5% from an initial range of 2% to 3%. The stock then exploded higher last week, after management dramatically increased its fourth-quarter revenue per available seat mile (RASM) guidance. By the end of the week, Spirit Airlines shares had surged 24% to a new multiyear high. 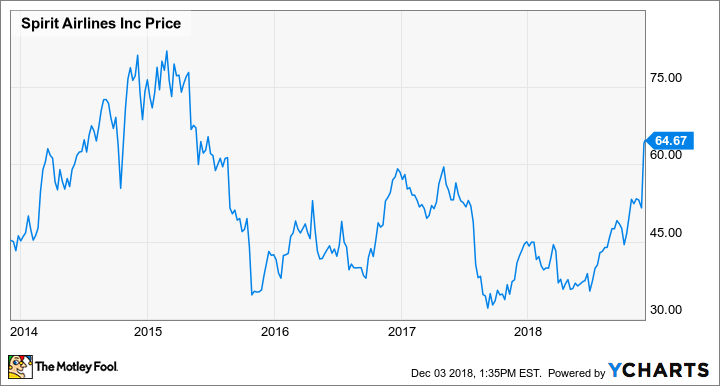 Given how far the stock surged last week, investors may be wondering whether this is a good time to sell Spirit Airlines stock. However, with fuel prices stabilizing and unit revenue finally recovering, there could be plenty more upside for the budget carrier's shares.

Spirit Airlines' original guidance for the fourth quarter called for a solid 6% RASM increase. That would have represented a continuation of the strong trajectory established last quarter.

Yet Spirit Airlines' revenue trends continued to improve quickly in the month after this forecast was published in late October. Last Monday, the company said it now expects RASM to jump 11% this quarter. That's a level of growth that hasn't been seen in the U.S. airline industry since the early days of the recovery from the Great Recession.

This uptick in unit revenue growth is particularly notable because jet fuel prices have fallen by more than $0.40 per gallon since Spirit made its initial forecast in late October. Over the past few years, falling fuel prices have periodically led to fare wars. Fortunately, the latest pullback in oil prices hasn't triggered a surge in competitive activity -- and there's a good chance the industry pricing environment will remain favorable next year.

The future trajectory of Spirit Airlines stock will depend in large part on whether the company can continue to deliver strong unit revenue growth in 2019. It may not be realistic to expect 11% growth for the full year, but a solid mid-single-digit increase seems quite achievable. Second, Spirit Airlines is dramatically slowing its growth rate. It increased capacity 26% year over year during the first three quarters of 2018. By contrast, it expects to increase capacity just 15% in the fourth quarter and 14% in 2019. Slower growth means Spirit will have less capacity in new markets, which tend to produce lower unit revenue. It also reduces the likelihood that another carrier would react to Spirit's growth by launching a fare war.

Third, other low-fare carriers like Southwest Airlines ( LUV -0.31% ) are planning for relatively slow growth in 2019 to combat recent margin pressure. Southwest in particular has said that it will increase its capacity no more than 5% next year. Moreover, about half of that growth will be in Hawaii, where Spirit Airlines has no presence. Southwest's capacity growth will be even lower in the continental U.S.

Alaska Air and JetBlue Airways are also moderating their growth rates in the face of falling profit margins. With most of the price leaders in the U.S. airline industry planning for slower expansion in 2019, Spirit Airlines should be able to continue posting strong RASM gains.

Spirit Airlines paid an average of $2.28 per gallon for jet fuel in the first three quarters of 2018, and its full-year average fuel price is likely to come in around that level, too. By contrast, based on the recent cost of jet fuel, Spirit's average fuel price could be $0.25 per gallon lower next year. Meanwhile, management expects nonfuel unit costs to rise no more than 1%.

This wouldn't be an unprecedented level of profitability for the carrier. But even if fuel prices bounce back and Spirit's average fuel price remains flat year over year in 2019, Spirit Airlines could still post EPS of between $6.50 and $7 next year, with RASM growth of just 4% to 5%.

From this perspective, Spirit Airlines stock still looks quite cheap. Its current price of around $65 could imply a valuation of 10 times forward earnings or less. If Spirit can keep posting solid unit revenue increases -- and barring another fuel price spike -- the stock is likely to continue flying higher.