Please ensure Javascript is enabled for purposes of website accessibility
Free Article Join Over 1 Million Premium Members And Get More In-Depth Stock Guidance and Research
By Rich Smith - Updated Apr 14, 2019 at 1:03AM

And how it could end up helping SpaceX even more.

Northrop Grumman also inherited Orbital's ongoing NASA contract to resupply crew aboard the International Space Station (ISS) with needed consumables under the agency's CRS-1 and CRS-2 "Commercial Resupply Services" contracts -- missions valued at as much as $14 billion across the three companies hired to run them.

Hold up. There were three winners?

It's this latter company I want to talk about today, because it's the CRS-2 contract awarded to SNC that I think holds the most danger for Northrop Grumman shareholders. 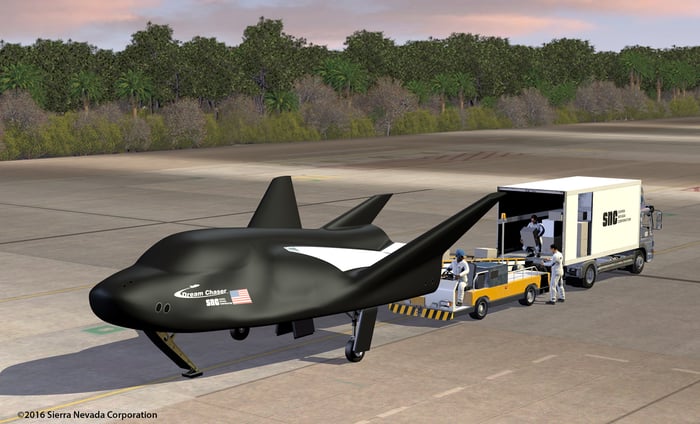 Which of these things is not like the others?

Sierra Nevada intends to perform its obligations under CRS-2 using its new "Dream Chaser" spaceplane, a privately developed space shuttle (but only one-quarter the size of the Space Shuttle) that will launch into orbit atop a rocket, make its delivery, then land back on Earth under its own power like an airplane.

SNC has already completed production of "many critical parts" of Dream Chaser, and last month, Dream Chaser passed another key milestone. Dubbed "Integration Review 4," this latest test evaluated the spaceplane's "design and its integrated performance with launch, ground and flight elements," and concluded that "the Dream Chaser program was ready to move to full-scale spacecraft manufacturing and testing," with a likely introduction into service by late 2020.

Dream Chaser is designed to be reusable, with a service life of 15 missions. In this regard, the SNC is similar to SpaceX, which sends cargo to ISS aboard reusable Dragon space capsules launched into orbit by also-reusable Falcon rockets. Utilizing reusable spacecraft, both SNC and SpaceX should be able to save considerably on the cost of their missions, because they will not need to build new spacecraft for each supply run.

How Sierra Nevada could work even more cheaply

Currently, plans are for SNC to purchase Atlas V rockets from United Launch Alliance for this purpose. But in 2016, SNC's then-VP of Space Systems John Olson let on that SNC was designing the spaceplane to be "agnostic" as to which launcher it uses to get into orbit. So in theory, at least, SNC could use a SpaceX Falcon rocket to carry Dream Chaser instead. Because SpaceX's Falcons are cheaper than the expendable rockets used by other space launch companies, this would probably result in a lower launch cost for SNC (and the cost could be even cheaper if SNC uses reusable Falcons).

What it means for Sierra Nevada

Granted, this would necessitate giving money to a competitor. However, seeing as Sierra Nevada is going to have to buy its launch vehicles from somebody, it might as well buy them from the cheapest provider. And if it does so, this will almost certainly mean that not only SpaceX, but SNC, too, can bid below what Northrop Grumman must charge to perform CRS-2 supply missions for NASA -- giving SNC a leg up in future competitions to resupply ISS.

What it means for Northrop Grumman

As mentioned above, Northrop Grumman is currently working on development of a new rocket -- OmegA -- which could enter service in time to be used on CRS-2. Now, CRS-2 is expected to run from 2019 through 2024 -- the year ISS was expected to go out of service. However, in December, the U.S. Senate voted to pass a new Space Frontier Act that would extend the service life of ISS and keep ISS in operation through 2030. While not yet law, passage of this act in the Senate plus support for a similar service life extension in the House suggest there could be a need to keep ISS supplied for years to come, necessitating the award of a new "CRS-3" contract within the next five years.

Unfortunately for Northrop, OmegA, like Antares, is going to be an expendable launch vehicle. Unless and until Northrop Grumman changes strategy and develops a reusable launch vehicle of its own -- and ideally, a reusable spacecraft to launch with it -- Northrop will find itself hard-pressed to compete against other launch providers that do reap the cost savings of reusable hardware.

Result: Northrop could find itself priced out of competition on any future NASA CRS-3 contract.

What does all of this mean for SpaceX? As the only space contractor possessing reusable launchers and reusable spacecraft -- both homegrown -- SpaceX has a tremendous advantage when competing for NASA contracts.

Sierra Nevada can narrow this cost advantage by taking advantage of SpaceX's reusable Falcon rockets to launch its own reusable Dream Chaser into orbit, but only at the cost of subsidizing SpaceX's efforts to develop even more advanced and more cost-effective means of space transportation, increasing SpaceX's advantages over SNC -- and over Northrop Grumman and United Launch Alliance as well.

All of this bodes very well for SpaceX expanding its lead in the space race in the years to come.